Walk in the Promenade

It’s rare to find 200 consecutive acres of land for development. And deciding to take on such an amount of land can be a risk. In 2007, just prior to the recession in the U.S., The Martin Group and its partners in Evansville saw opportunity in such a tract of land on the East Side of Evansville. Though a challenge, the group knew it would be worth it to develop this large area.

“It’s rare to find such a large single tract, but it’s also rare to find someone or a group who will take on a single tract and try to plan it,” says The Martin Group Senior Advisor Chris Stuard. “It’s a commitment.”

For The Martin Group and its partners, that commitment has played out over the past decade at The Promenade on Evansville’s East Side. As one of the primary focuses for the development team, the emphasis of The Promenade has been on mixed-used, lifestyle development from its inception. The development group and the Martin’s management and brokerage teams have worked over the last 10 years to attract retailers and restaurants to the space.

“Part of that original vision was to bring something to Evansville that was unique and trying to encourage stopping the brain drain,” says The Martin Group President Steve Martin. “Keeping people here because of the things that are here and the quality of things that are here.”

Though the recession of 2008 slowed the plan for development, it did not stop it completely. Businesses both locally and nationally continued to express interest in coming to The Promenade, but none came to fruition.

“There was six years of planning and a recession during the process before Academy opened,” says Stuard. “We never really saw much decline in interest, the economic situation just kept people from pulling the trigger.”

The years of planning weren’t easy, according to Stuard. As the 200 acres was former farmland, there was no infrastructure in place for new development. Water and sewer lines had to be plotted out thoughtfully, entrances considered, and flat land to be filled. But the work paid off — the big kickoff for the area happened in 2014 when The Promenade signed in national recreational chain Academy Sports. Since then, development across the 200 acres has been occurring at a fast pace.

“What we’re doing is attracting new-to-the-market businesses to come in and give Evansville more variety,” says Martin. “If you look, other than Burger King, every other business in The Promenade has come from outside the market.”

After Academy Sports opened in 2014, The Promenade welcomed in various restaurants including national chains such as Burger King and Zaxby’s as well as local franchises of Mister B’s and Wasabi Evansville. A Drake’s restaurant currently is under construction after a pause in work due to the COVID-19 virus. Fresh Thyme Farmers Market, a natural food grocery store, opened in The Promenade in early 2018, and wholesale grocery chain Costco opened their doors along the Interstate 69 corridor in 2019.

From the start, The Martin Group and its partners has had a vision in mind — hence the ownership name Evansville Vision, LLC — providing a walkable and bikeable area where Evansville residents can work, live, and play. Twelve-foot sidewalks are built around new developments and are interconnected to existing sidewalks. The plan is to allow residents and shoppers to be able to move through The Promenade without ever having to get on a main Evansville thoroughfare. But Stuard is quick to point out part of that vision means remaining flexible while still maintaining a standard of guidelines to ensure The Promenade keeps its core concept. They also have an architectural review committee in place to review submitted plans.

“Every building gets reviewed by that committee,” says Martin. “A great example, I think, is the Costco building. There’s a lot of masonry and a mix of different materials, whereas their normal buildings are a little different than that.”

“Between those two, there are long-term protections built in,” adds Stuard. “If a business wants to make renovations, change the building, or rework the parking lot, they have to go back through that process. People can go in, buy, and build in The Promenade and be comfortable that we’re going to maintain that integrity and feel.”

Another unique aspect of how The Martin Group and the development team attracts business into The Promenade is rather simple —  they do not exclusively develop the individual buildings on their own. Instead, different developers can come in, purchase land, and build out to their needs.

“We’ve made a master plan and are selling the land,” explains Martin. “Different developers can put their vision out there and you get a variety of product, and it gives people the opportunity to bring things to Evansville.”

As the state of Indiana moves out of the quarantine and restrictions from the COVID-19 pandemic, growth at The Promenade continues at a full pace. Bill Fulkerson of Fulkerson Development currently is building next to Old National Bank along Burkhardt Road and has plans for another building north of Mister B’s. Verizon plans to move its East Side store into the south suite of Fulkerson’s building, leaving two other spaces open for lease. In the northern building, he plans to move his business Computers Plus into one suite, while the restaurant Chicken Salad Chicks will move into the other.

SVN The Martin Group is exclusively leasing the vacant space in these facilities for Fulkerson as well as facilitating the land sales and other leasing within The Promenade.

“The properties I look for are the premier locations, and this is it,” says Fulkerson. “If you want to own the best of the best, that’s in The Promenade.”

Behind Fulkerson’s current project, a large center is planned to occupy space between Fresh Thyme and Academy. Set to break ground in July, this building will house retailers Marshall’s, Home Centric, and Burke’s Outlet. SVN The Martin Group also is currently in other negotiations with some retailers for space in the center and in two outer buildings nearby. 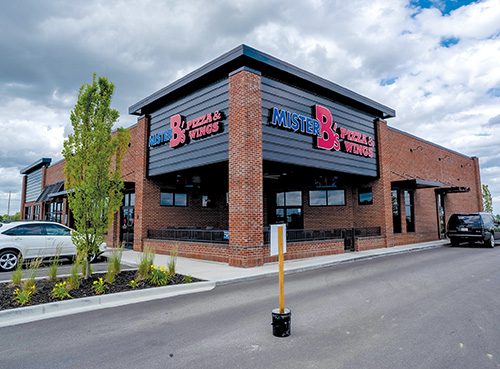 “It’s exciting,” says Fulkerson. “There’s just so many people looking for great locations, and this is so central to Evansville, so convenient to get to.”

While The Promenade is currently primarily occupied by retail and restaurant space, the development team is now looking to see the live and work aspects come into the development. Currently, the two are in discussions with developers about condo and apartment projects. There also is hope for a medical office, general office, and mixed-use buildings, possibly in the area of Vogel Road.

“We also see a night spot developing there at Burkhardt and Vogel. You have Wasabi Evansville there, then you’ll have Drake’s, and Mister B’s is down there with a tremendous following already,” says Martin. “There’s room for hotels as well.”

While 2020 pushes on and work commences on new projects at The Promenade, Stuard and Martin see a bright future for the remaining acreage on the East Side. The unique master plan, the ability to host a variety of businesses, and the location of the development combine for a perfect recipe that will continue to benefit Evansville and the region as a whole.

“We know one thing for sure — what you’re seeing there today on our masterplan map won’t be what it is two years from now,” says Stuard.