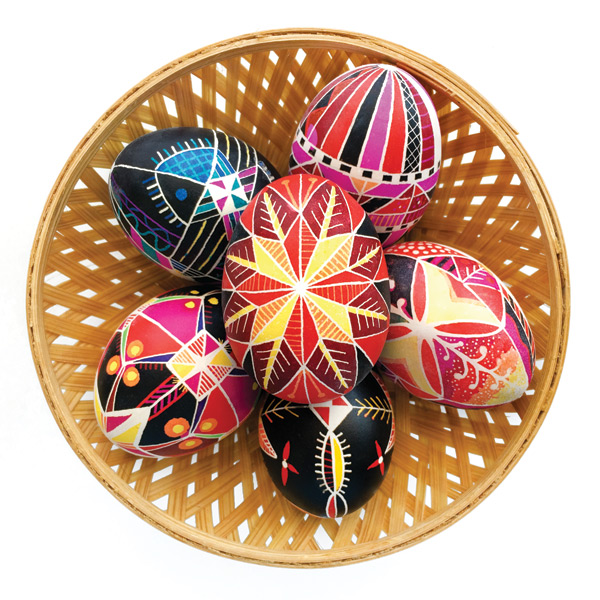 This year finds Ukraine in a state of political and civil unrest, though my recent experience with the country comes in an art form representing hope and life. I don’t remember the first time I saw a Ukrainian Easter egg, but the bright colors, intricate patterns, and pure artistry of the craft stuck with me. I finally decided to order a starter kit and challenge myself to create some of my own pysanky.

Pysanky (pronounced PIH-sahn-kih) is an ancient art handed down through many generations of the Ukrainian people. While it was originally a pagan folk craft, with the introduction of Christianity its symbolism was re-interpreted, and the practice became an important religious ritual. The women of a family traditionally created the eggs during the last week of Lent, then gave them away as gifts. While the eggs themselves are symbolic, their designs and colors can also have significance, and each motif was chosen to match the character of its intended recipient.

The word “pysanka” (the singular form of pysanky) comes from the verb meaning, “to write,” because the eggs are written on with beeswax. The wax is applied using a specialized stylus called a kistka. You might remember the wax crayons that often come with commercial egg dying kits — the wax-resist method used to create pysanky is similar, though more refined. While traditional kistky still are used, technology has allowed for modern versions that allow for better control.

For my eggs, I used what is called delrin kistky, which have plastic, heat-resistant handles and brass funnels. Once the design is lightly drawn on the egg with pencil, the funnel of a kistka is heated over the flame of a candle, dipped into a block of beeswax, and heated again before applying the tip to the egg’s surface to release a stream of wax. This process will seal the white color of the eggshell below where the wax has been applied. The next step is to dye the egg the first color.

Dyes used for pysanky are stronger than your average Easter egg dye and must be applied in a certain sequence, generally from light to dark. The first color is yellow. Beeswax is then applied to the part of the design that should be yellow, and the egg is dyed again. This process is repeated until all the chosen colors are layered. When the dye is completely dry, it is time to remove the beeswax. Several methods can be used, but I chose the traditional way of holding the egg near the candle’s flame, allowing the wax to melt, then wiping it until clean. Finally, apply a coat of polyurethane varnish to give it a glossy, protective finish. Most people wait to blow out the contents of the egg (a handy device is available online) after the varnish is applied, so any liquid that might touch the shell doesn’t affect the dye.

While these are the very basic steps, I’ll admit that pysanky is an advanced craft and it takes practice to learn the proper preparation and technique needed to get a nice result. Pysanky supplies are available at several online stores, including ukrainiangiftshop.com, where I purchased my kit. If you’re interested in creating your own, be sure to visit these sites for tips and design ideas.