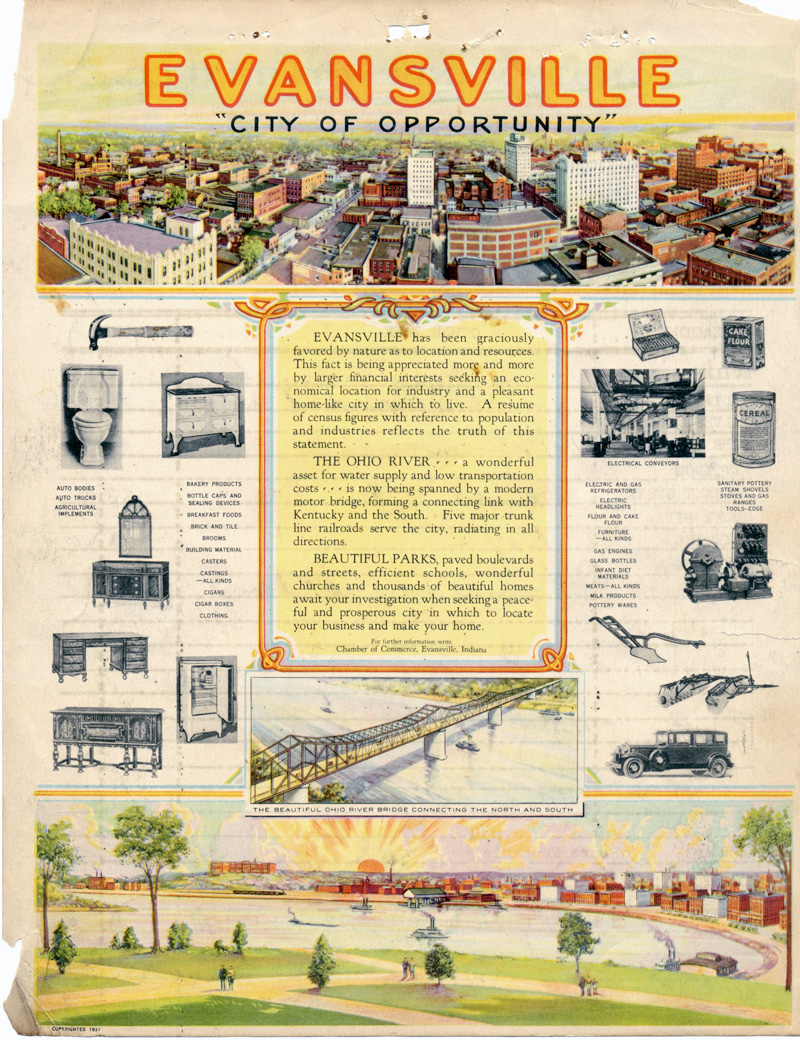 Has Evansville’s bicentennial (celebrated last year) and Evansville Living’s coverage of it inspired you to learn more city history?

The Final Detail in the March/April issue of Evansville Living (last page) features a variety of historical items bearing Evansville’s name. Here we feature more pieces of Evansville’s past, thanks to Dennis and Margaret Haire.

► City of Opportunity: This invoice from Grote Manufacturing Co. included promotional material about Evansville. According to The History of the City of Evansville and Vanderburgh County, Indiana by Frank M. Gilbert, Grote Manufacturing Co. was one of the mammoth industrial companies in Evansville. The company manufactured freight and passenger elevators, steam and water heaters, and machinery for tobacco packing plants.

▼ Cook’s Goldblume Beer sign: F.W. Cook Brewing Co. was located at 11 NW Seventh St., according to Donahue Studios 1940s Photographs. The company was initially established under the name of Cook & Reis, after F.W. Cook and Louis Reis. The History of Vanderburgh County, Indiana: From the Earliest Times to the Present says the pair established and built the City Brewery in 1853. Louis Reis then sold his interest in the brewery to his brother, Jacob Reis, who was Cook’s stepfather. Cook became the sole owner of the business in 1873, and in 1885, the City Brewery was converted into a stock company under the name of F.W. Cook Brewing Co. The company, the book says, brewed a famous Pilsner beer that became a "household word and is the most popular beverage in this part of the country." 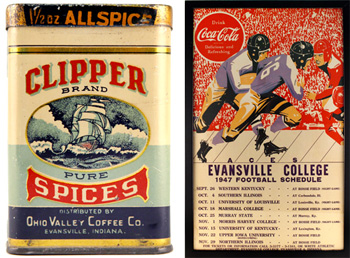 ► Clipper Brand Pure Spices: We don’t know much about this spice container, other than it was distributed by the Ohio Valley Coffee Co. in Evansville.

► Evansville College 1947 Football Schedule: Football was a big deal at Evansville College, now known as the University of Evansville. The university’s football program disbanded after the 1997 season, but as you can see from this 1947 poster, it had the support of one famous beverage — Coca-Cola.