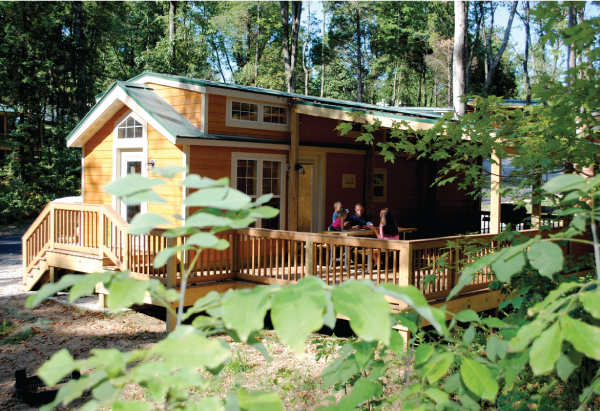 In 1958, 12 years after Santa Claus Land opened, Bill Koch realized the theme park’s guests had nowhere to stay after it closed each night. So Koch, who had assumed control of Santa Claus Land from his father, Louis J. Koch, decided to open a campground.

The result was Lake Rudolph Campsites, a place where visitors could pitch a tent and roast a few marshmallows. It also was located directly behind the Koch family’s home.

Dave Lovell, Lake Rudolph’s director of marketing, says during the summer, the campground will have more than 3,000 guests per night, more than doubling the population in Santa Claus, Indiana.

“There is no doubt that many of our guests go to Holiday World,” says Lovell. “That is still an important relationship. But we are continuing to develop Lake Rudolph Campground and RV Resort in and of itself. We continue to add more family-fun amenities.”

Philip Koch, one of Bill’s sons, took over in 2002 as the campground chief executive officer of HO HO HOldings, which owns Lake Rudolph along with other properties in the Santa Claus area. Holiday World, which often partners with the campground, is owned by a separate company, Koch Development Corp.

Philip Koch died unexpectedly in April 2013, but it was his vision that made Lake Rudolph grow. He added Rental RVs. Family cabins were added next, followed by Rudolph’s Christmas Cabins, the 22 newest of which were put in last summer.

The Christmas Cabins — which Philip Koch helped design — sleep families of eight with one bedroom and a loft. They also have air conditioning, free Wi-Fi, three flat-screen televisions, a refrigerator, microwave, oven, and dishwasher. Lovell says Lake Rudolph is able to offer comfort while still giving families the outdoor experience.