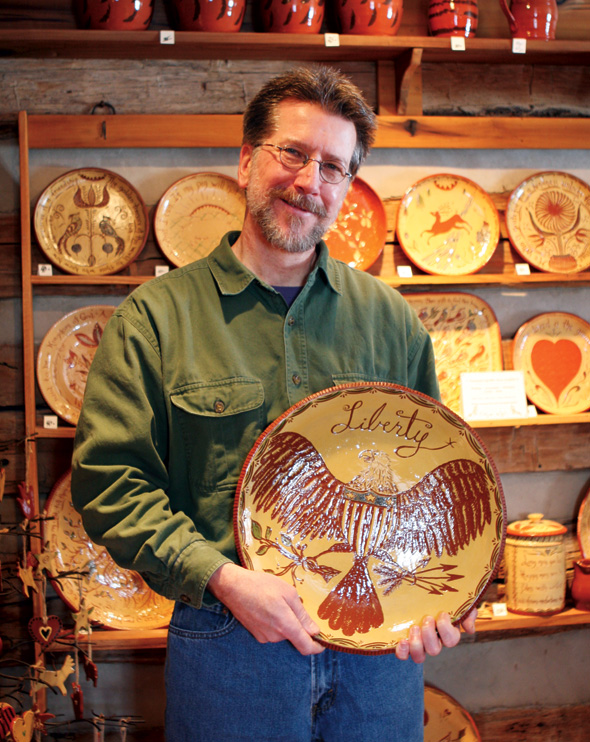 Sixteen years ago, Tom Wintczak was the furthest thing from a trained artist: The Whiting, Ind., native earned a business degree from Indiana State University and managed the Evansville Regional Airport’s Hertz car rental facility for 23 years. But on a whim, he enrolled in a six-night pottery class through the University of Southern Indiana’s continuing education program. The first time Wintczak sat down at a potter’s wheel, “it just kind of stirred something in me,” he recalls. “It felt really right.”

The USI art course in 1994 remains his only formal training, and Wintczak didn’t stop creating when the class ended. In 1997, he formed Bee Tree Pottery, named for the trees on the rural Posey County property he shares with his wife, Ruth. He eventually left his job with Hertz to focus on his art. Wintczak specializes in an early American pottery form called redware. In his studio — an 1850s log cabin near his home — he also creates functional pottery such as tea sets and quirky folk art pieces such as face jars and snake jars.

In January, Wintczak celebrated one year as a full-time potter. “It’s been a great year,” he says. “I love it so much.” He’ll demonstrate the process of making redware at Heritage Artisans Week in New Harmony, Ind. (April 20-24), and he’ll display and sell various types of pottery at the Arts in Harmony art sale (May 1-2). Wintczak’s pottery also is sold at Nance Galleries (662 S. Green River Road) and on his Web site.

People would come to the village potter and ask him to put their family name or a Bible verse on a plate, and they would put it on the mantel … I do pieces that are inspirational because I think that’s what people were looking for in that time period, especially the German potters. Most of them came here escaping religious persecution, so they were part of communities that were heavily involved in religion. One phrase that I love to put on plates is, “Sing, pray, and go on God’s way/Perform what thou hast to do faithfully.” You can imagine if that were on a mantel, they would see that every day. It’s just a reminder, every day, to live.

In contrast, your face jugs and snake jugs are fascinating — and a little scary.
There’s actually a lot of history to the face jugs. Slave potters were making them in the West Indies, putting them by gravesites. We don’t know if it’s a ritual or a voodoo thing that evil repels evil — no one really knows because there’s no written history. They migrated with slave potters into the Appalachian Mountains, and they turned into a storage form to keep poisons and alcohol and medicines in and scare children away. The snake jugs came about later, and they were inspired by the temperance movement. By putting a snake on a jug, it was reminding the person that the whiskey was good for medicinal purposes, but watch out, it can bite.

Do you have any hidden talents?
My wife and I both play instruments. (The style) goes back to our love of history — Appalachian music like old ballads and fiddle tunes. We play a lot of early American music. I play hammer dulcimer; we both play lap dulcimer. I started playing guitar about two years ago.

As a potter, what kind of legacy do you hope to leave?
I’ve thought about that at times. I’ve made thousands of pieces now, and they’re out there. You don’t really think about it when you’re first starting out, but as I visit museums, I start to think, “Pottery is something that doesn’t disintegrate. It breaks, but even when it’s broken, it still doesn’t disintegrate.” These things, good or bad, are always going to be out there. That’s a motivating force now to make good-quality things that are beautiful. I really do believe people a couple hundred years down the road — even if it’s just one person — might have one of my pieces. I do anniversary plates and wedding plates, just like people came to the village potter … and I think, “Gosh, these become family heirlooms.” It gets handed down to someone, and handed down, and handed down. That is kind of a heartwarming thing.