On Dec. 24, 2004, a record-setting 19.3 inches of snow covered the Tri-State in one day, but the snow that fell on Jan. 27, 2009, caused far more damage. The five inches of snow, combined with an inch of solid ice, led to power losses for tens of thousands of Evansvillians, who relied on the warm outreach and homes of their friends, families, and neighbors for support as some outages lasted for a week. More than 100 counties in Indiana, Kentucky, and Illinois declared states of emergency, and more than 30 people died.

This ice storm quickly became one of the most damaging weather events in Evansville’s history. As local weather historian Harold Morgan knows, it wasn’t the first time the Tri-State’s been hit with bad weather, and it won’t be the last. With Morgan’s help, we look back at the major storms that, yes, caused terrible damage, heartache, and loss. But, in the storms’ aftermaths, the community proved it had a compassion for the victims and a determined spirit to endure.

The kingdom Tambora in modern-day Indonesia disappeared in a matter of minutes in 1815, under billions of tons of rock and ash during a violent volcanic eruption from Mount Tambora. The winds pushed the abundant dust particles throughout the world, causing the year without a summer and a big global climate change, which led to the death of tens of thousands. “The year without a summer lasted about five years, but 1816 was the worst,” Morgan says. “It may well have snowed here in September to begin the real winter, which would only have given a growing season of two or three months. The farmers would have planted early and lost the seed to the cold and damp soil.” Droughts, famines, and deaths were common throughout the world.

John Chappelsmith documented the first scientific study on a tornado that crossed three states on a 250-mile path that killed three people in New Harmony, Ind. Hired by the Smithsonian Institute, he sketched what he saw by tracking the destruction of the tornado, which felled 7,000 trees per minute, left. His 12-page account was the first to conclude tornadoes rotate.

In the early months of 1918, nearly 70 inches of snow fell in 30 days — 41 inches in January alone. By Jan. 12, the city was already fed up with the weather as one newspaper headline read “Fifth Blizzard Paralyzes City.” A brief moment of sunshine flashed Jan. 14, and snow-covered citizens seemed ready for a change: “While the sun shone cheerfully, everybody turned out to show King Winter he wasn’t boss,” read a Jan. 15 newspaper lead. The next day, as Evansvillians dug their way out, they piled snow banks as tall as eight feet along Main Street.

After forming in Missouri around 1 p.m. on a March 18 afternoon, the tornado, described by witnesses as an “amorphous rolling fog,” barreled through Illinois, killing hundreds. When it reached Indiana, the tornado hit the muddy, flooded banks of the Wabash River. The funnel sucked up the mud and blew it onto the people of Griffin, Ind. After nearly four hours, the tornado had traveled 219 miles and died out in Petersburg, Ind. This was decades before radars and satellites, so meteorologists are unsure whether it was one tornado or a “family” of tornadoes that came from one storm. What is clear: The Tri-State Tornado killed nearly 700 people, injured more than 2,000, and destroyed 15,000 homes. In Southwest Indiana, the death toll neared 70 people. Recovery efforts cost more than $16.5 million — that price tag would be well into the billions today.

About 5,000 people are estimated to have died from the effects of the heat in the United States during 1936, most of them during this event. On July 13, 1936, temperatures in Evansville reached 108 degrees. During the heat wave, five consecutive days were above 105, and 78 days were above 90. In Evansville, steel workers along the river plaza, surrounded by heat-trapping metal, suffered through 132-degree temperatures for four consecutive days. The hot steel beams easily blistered their hands. Long before air conditioning was a common household fixture, people took refuge in local movie theaters that had adopted the technology.

December of 1936 was one wet month. The new year didn’t bring relief. Rain, snow, and sleet were the norms most January days, and the accumulation of snow and ice prevented rainwater from soaking into soil. By Jan. 10, the river passed flood levels, and 76 million tons of water dumped into Vanderburgh County, not receding until Feb. 19.

As the flood approached its crest at 53.75 feet, “Evansville literally turned into an island, totally surrounded by flood,” says Morgan. “My brother-in-law’s family had to leave the West Side of Evansville and walk the railroad tracks in rain, snow and sleet into southern Illinois.” They were not alone as thousands were evacuated, and water covered 500 blocks in Evansville. Farmers led livestock into their homes.

One leader of the disaster relief, General Robert Leich, reflected on the flood 20 years later: “Not realizing, of course, that World War II was just around the corner, I thought I would never again see this city so united in one effort and purpose as it was during the 1937 flood.” Even Girl and Boy Scouts became important volunteers, setting up cots and carrying boxes of food to feeding stations.

The flood inspired the $55.6 million Evansville Flood Control Project, which took 57 years to complete. The U.S. Army Corps of Engineers designed gates to shut off a rising Ohio River, preventing the waters from sluicing through the city’s drainage system. 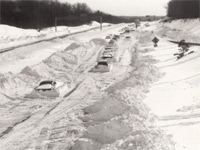 This storm birthed the famous “I’m carrying a blizzard baby” T-shirts (pun intended). The blizzard kept thousands of Indiana residents cooped up for days in late January, and the result was a fall “baby boom.” That was the rumor, anyway, until doctors announced the number of October births was actually below average.

The blizzard was too severe for baby-making, it seemed. In January 1978, nearly 30 inches of snow fell. Roofs caved in. Supplies, groceries, and fuel never made it to Evansville on the snow-covered roads. What’s remembered most was the blast felt on Jan. 26. Winds raging up to 55 mph whipped through snowdrifts 10 feet high and created a wind chill of minus 50 degrees.

On March 1, a fierce storm system dumped more than 10 inches of rain over most of the Tri-State. The Ohio River flood of 1997 affected nearly 25,000 families. For months, automobile tires, plastic containers, and other debris became one of the lasting legacies of the flood. The water-filled tires, which had floated away from a tire dump on Red Bank Road, piled up in ditches and fields, becoming havens for mosquitoes — and a major concern for Vanderburgh County health officials. Vanderburgh County was declared a federal disaster area along with several Indiana counties. 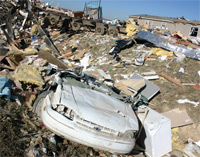 At 2 a.m. on a Sunday morning, a deadly tornado cut a path of destruction for 41 miles, beginning in northern Kentucky in Ellis Park and finally lifting in Degonia Springs, Ind. Winds up to 200 mph struck after an unusually warm November day. The hardest hit area was Eastbrook Mobile Home Park, just outside of Evansville along Interstate 164. Some 2,000 tons of debris from the trailer park filled three area landfills. Since the tornado hit in the middle of the night, thousands of people were caught off guard. Hundreds were injured, some were trapped under debris for hours, and 25 people were killed. More than 300 rescue workers, firefighters, police officers, Indiana National Guard soldiers, and volunteers responded that night, and thousands of others joined in the recovery efforts in the months that followed.

In the first half of September, Ike — the most costly hurricane for the United States in 2008 — struck southern Texas and Louisiana, and surging, 50-foot waves pummeled the coastline. Homes vanished beneath the surf, and disruptions in oil drilling and gas refinery led to gas shortages in the South.

The remnants of the storm blew up to the Tri-State on Sept. 14 when gusts of nearly 80 mph broke tree limbs, ripped off roofs, and caused massive power outages. More than 40,000 in the Evansville area were left without power, and 100 crews worked 16- to 20-hour days to return service to the community.