A Battle with IPF 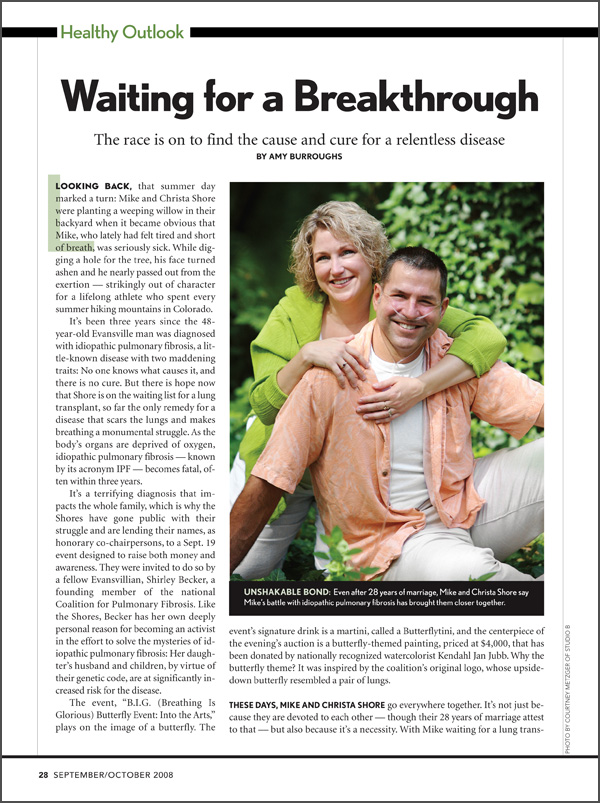 When Evansville Living readers last saw Mike Shore (“New Hope,” September/October 2009), he was recovering from a long-awaited lung transplant, the only effective treatment for the idiopathic pulmonary fibrosis he had been diagnosed with more than three years earlier. IPF, a progressive disease that scars the lungs, has no known cause. The Coalition for Pulmonary Fibrosis estimates there are 128,000 IPF patients in America, and each year, 40,000 people die from the disease — the same as breast cancer.

Mike’s body fought the new lung from the start. Several bouts of “acute rejection” became “chronic rejection,” Christa says, and Mike returned to the transplant waiting list in April 2010. Four months later, he received a double lung transplant. According to Christa, these lungs are “practically a perfect match.”

Their difficult experiences, Christa says, have led to a different life: They recently graduated from Lee University in Cleveland, Tenn., with degrees in pastoral studies, became licensed ministers, and founded a church, Beyond the Veil Fellowship. The small West Side worship center with a coffeehouse vibe began more than a year ago.

They also started an IPF support group. “We’re taking from our experience and using it to share with others,” Christa says. “People don’t know what to do when they get this diagnosis.” The group offers encouragement and advice to both those who have been diagnosed and family members.

And Christa is encouraged by Mike’s improvement. “It’s really awesome to see (Mike) doing as well as he is now,” Christa says. “There have been times when he has not been so functional.” Recently, Mike and Christa were watching TV in bed when Mike reached over and held Christa’s hand. “That’s a big thing,” she says, “because we haven’t had that for so long.”

To learn more about the disease and a public symposium on June 10, click here.