A New Era of Energy 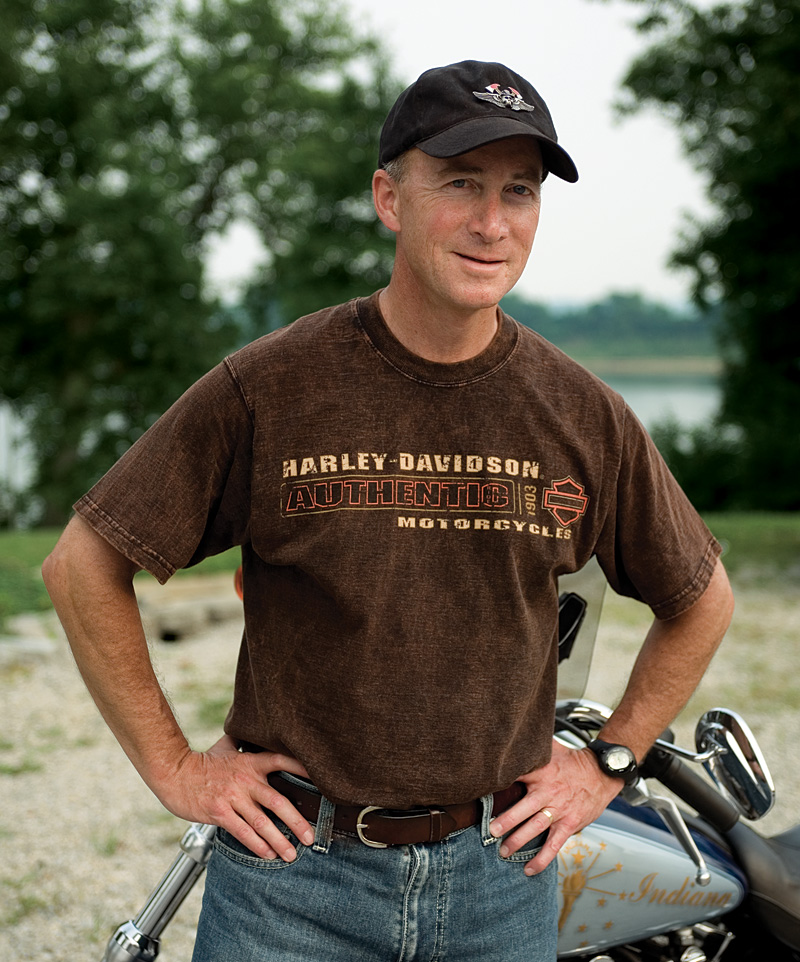 Standing alongside a just-arrived 100-car coal train at Southwind Maritime Centre on a summer’s day, Taylor Kanipe, clad in jeans, T-shirt, and ball cap, could be mistaken for a crewman at the Mount Vernon Transfer Terminal. It takes only a handful of workers to move the entire cargo, from rail car to barge, in four hours.

But Kanipe, only 26, tall and built like a man accustomed to hard work, already has a year as general manager of the Alliance Coal-owned facility. “I don’t know anybody my age doing what I’m doing, to tell the truth,” says Kanipe, in a relaxed drawl that reveals his Western Kentucky roots. “I was fortunate, I guess, growing up around it — I’ve been around the coal business since I was in diapers.” In those days his father, Bruce, now owner-operator of Rockport (Ind.) River Terminal, ran a small coal dock at Union County, Ky.

The younger Kanipe, a Murray State University graduate in business administration, could become a key player in Southwest Indiana’s economic future. When Indiana Gov. Mitch Daniels told Evansville leaders recently that “we sit on more BTUs than OPEC,” he was talking coal. Illinois Basin coal, that is, which runs rich in reserves underneath South-west Indiana and fills the 10,000-ton trainloads that run daily into the terminal Kanipe oversees.

A year ago this month, Daniels unveiled a strategic energy plan with potential to add layers of new muscle to Southwest Indiana’s economy. Dubbed “Hoosier Homegrown Energy,” it would reduce — through more reliance on the state’s resources and conservation — a deficit where Indiana now imports 75 percent of its energy. Daniels sees gains in economic development, environmental quality, and national security by enhancing energy independence.

How will the state fuel what Daniels’ calls  “Indiana’s powerhouse economy” in the 21st century? The plan lays out several solutions, all with major implications for Southwest Indiana. Topping the list is tapping into Southwest Indiana’s abundant reserves of coal, transformed into a cleaner, safer form of fuel than ever seen before. Not far behind is a proposal to return Indiana to its status as a major natural gas producer; a promise to invest significant sums of money into alternative fuels including technology that converts biomass — from animal waste to landfill gases — into electricity; a prediction that farm crops will be turned into “battlefield fuels” for the U.S. Department of Defense; and a daunting challenge to reduce the environmental impact of the state’s rising energy use through an aggressive commitment to energy efficiency and improved infrastructure.

How did Indiana arrive at a place where it has its own strategic energy plan, developed and executed by a new state agency called the Indiana Office of Energy and Defense Development?

It came to pass on the 2004 campaign trail, winding across Southwest Indiana in the well-marked RV that became nearly as recognizable as his own face, that Daniels developed a vision of the state’s energy future.

The Republican governor-to-be “was troubled when he discovered Indiana was a net importer of energy,” recalls his former campaign policy director Jason Barclay. Daniels discovered that sources outside the state were selling Hoosiers 75 percent of their energy. Graphic proof passed within view of Daniels’ and his campaign staff as they navigated sections of U.S. Highway 41. Headed south were unit trains of freight cars bearing markings of a Western railroad, hauling coal mined in the Powder River Basin in Wyoming into Southwest Indiana, a once thriving coal supplier “now clearly left behind,” says Barclay.

Barclay, who would work in Daniels’ administration before joining the Barnes & Thornburg law firm in Indianapolis, says the governor, as a former Bush administration official, also was well aware that reversing the trend — by making Indiana a net energy exporter — was just the kind of move that would capture the attention — and dollars — of Bush officials who had vowed to steer the nation on a course toward greater energy self-reliance.

Daniels was startled, he himself recalled, at predictions by some Purdue University experts that the coal-rich state soon would be importing electricity supplied to the power grid from elsewhere. “I asked them, ‘How is that possible?’” Daniels recalls. “And they said, ‘Well, we haven’t built a generator in Indiana in the last 20 years.’” To add to his irritation, Daniels says he learned that despite Indiana’s status as producer of corn and soybeans, the state had been “AWOL from the bio-diesel revolution.”

Thus seeds were planted, destined to sprout the Office of Energy and Defense Development and its “Hoosier Home-grown Energy” strategy. Says Daniels: “With these things, there’s usually not one moment of epiphany. But a vision finally coalesces.”

The vision capitalizes on Indiana’s multitude of resources, including what Daniels calls “Hoosier ingenuity” found at the state’s research and teaching universities and in the corporate offices of the state’s large industrial energy users who know that it’s good business “to spend a dime to save a dollar” through efficiency — lessons he says that can benefit small business owners as well.

A cleaner version of coal dominates the strategic energy plan, and Daniels is convinced that the state’s scholars, with research and development funding from state and federal sources, will unlock the secrets to clean coal. How? Gasification. Researchers say transforming coal into gas before raking out dangerous pollutants such as mercury, sulfur, and slag is to refine it — as we long have done to crude oil. Result: clean hydrocarbons. What about the by-product carbon dioxide, a greenhouse gas? Those same clean-coal advocates say it can be put away in underground cavities, and that Illinois Basin geology suits that end. It’s not cheap technology. But advocates say it’s a foregone conclusion researchers will convince government policymakers that gasification plants — like the one proposed for Knox County by Duke Energy — are worth the expense. After all, their argument goes, the United States sits on an estimated 258 years of coal reserves at current consumption while dangers multiply from staking so much on foreign petroleum.

Clean coal isn’t Indiana’s only energy hope, but promises big impact in the near term. A July-released Indiana University study shows electricity accounts for half of all energy consumed in the state — 95 percent of it generated from coal. Of the 75 percent of every energy dollar going out of the state to import coal, natural gas and oil, most goes for coal. Half the coal Indiana generators buy is mined elsewhere because air-quality regulations render in-state coal, high in sulfur, a liability when burned in old plants with dinosaur pollution controls. Clean-air technologies — gasification, advanced scrubber systems and new, more sophisticated generating plants — would recharge demand for Southwest Indiana coal from 17 billion tons of reserves. Vincennes University, which launched a mining technology program in tandem with an increasingly high-tech coal industry, is counting on it, as is Duke Energy, which endowed program scholarships with an initial amount of more than $50,000.

The Illinois Basin, stretching from the Mississippi River in northwestern Illinois and comprising the southwestern third of Indiana and the western half of Kentucky, holds riches besides coal. The Tri-State yields some 40,000 barrels of superior crude oil daily from small “stripper” wells, and heightened interest is being paid to natural gas resources of the basin’s New Albany Shale. The region has produced natural gas since the 1850s; new retrieval technologies could propel substantial production far into the future. A National Petroleum Council Committee on Unconventional Sources says New Albany Shale in Indiana, Illinois, and Kentucky might contain 86 trillion cubic feet of gas.

Renewables are important, but with acknowledged limits. A line in a song from Neil Young’s 2005 Prairie Wind release describes a rural scene as “fields of fuel rollin’ on for miles” — possibly suggesting an endless supply of domestically produced energy awaits only the construction of more ethanol plants. But corn supplies are not endless, and won’t be. “We can’t continue to cut into our food supply for fuel—there’s a limit,” says Jon Neufelder, Purdue University Extension instructor in Posey County.

Corn prices are up, whether due to large worldwide grain demand or numbers of ethanol and bio-diesel plants being proposed or built. Either way, “the concern about bio-diesel and corn-based ethanol is the rising cost of feedstock,” says Dave Munz, who’s in charge of business development for CountryMark Co-op, a major Indiana refiner and supplier of both bio-diesel and petroleum-based fuels. (See “CountryMark Black Gold, p. 23.) “The question is: How do (alternative fuels) work in an economically viable and feasible way?” And how to do it swiftly remains a question as well. According to Munz, given current corn-production levels and rates of fuel consumption, converting every kernel of corn to fuel would cover a mere 20 percent of national demand.

There are some inherent environmental challenges with bio-fuels, as well. Neufelder, from the agricultural perspective, sees some farmers abandoning tried-and-true crop rotation practices in favor of more fertilizers and herbicides to boost production, but compromising future soil productivity. Munz thinks there may be techniques allowing higher corn yields without impairing the soil long-term. But that means enough corn for a 10-percent ethanol mix in gasoline. “Beyond that, it’s probably not rational,” Munz says.

Still, renewables are certain to impact the region’s economy. A late-summer groundbreaking is anticipated for an ethanol plant at the Southwind Maritime Centre in Mount Vernon, with at least five other plants proposed throughout the area. Fueling the interest in ethanol, and in a breakthrough technology that converts coal to liquid fuel, is the Clean Fuel Initiative, authorized by Congress, that mandates the Pentagon to work at an urgent pace to significantly reduce its dependence on fossil fuels and foreign oil. Indiana’s energy strategy plan commits the state to becoming a major supplier of new fuel sources to the Defense Department.

Will all the Daniels-touted ideas mesh, eventually bringing forth an energy-independent state that contributes to a national goal of self-sufficiency? Newburgh-based oilman Jim Brooker, in business 22 years, believes it’s a pipe dream: “During the Carter administration, a third of the oil we used was imported. Now, we import twice as much. What’s that tell you?” Kanipe, the young coal terminal manager and already a net-energy exporter to utilities from Florida to the Great Lakes, avoids the independence question, but likes what he sees. His terminal handles 2 million tons annually. That’s up from zero — a depressed coal market shuttered the 25-year-old facility for several years in the 1990s. It reopened in 2001. “The Illinois Basin, in the next five to 10 years, is going to be a big source of energy for the U.S.,” says Kanipe.

This much is certain: When Daniels dropped in at Vectren’s riverfront headquarters in early summer, hoisting high the Southwest Indiana banner over what may be the nearest to coherent energy policy Indiana has seen, business and community leaders were listening.