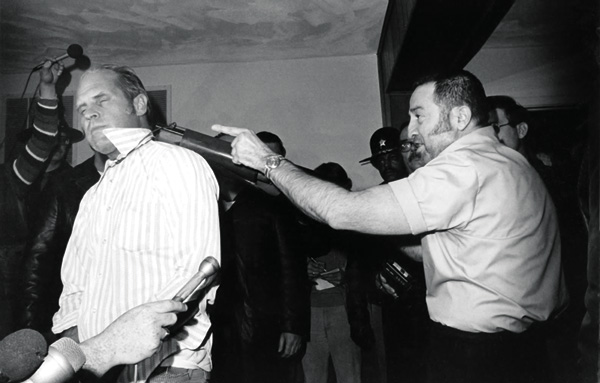 On Feb. 10, 1977, a 30-year-old John Blair was called to Indianapolis by United Press International to cover Anthony Kiritsis’ kidnapping of Indianapolis mortgage executive Richard Hall. Kiritsis had fallen behind on mortgage payments on property he financed with Hall’s company, and Hall refused to extend payment terms.

Kiritsis became convinced that Hall (and his father) wanted the property, which had increased in value, and kidnapped him from his office, where he also called police to tell them what he’d done. Kiritsis wired a sawed-off shotgun to Hall’s neck; the wire was connected to the trigger and then to Kiritsis’ finger — a dead man’s line. If police shot Kiritsis, the shotgun would go off and shoot Hall in the head.

Kiritsis held Hall hostage for 63 hours. During this time, most of which was spent in Kiritsis’ apartment, he called Indianapolis WIBC radio host Fred Heckman, who broadcast what Kiritsis said. Finally, negotiators said Hall had signed a document stating that he had mistreated Kiritsis and would pay him $5 million and that Kiritsis would not be arrested and prosecuted. The obscenity-laced speech Kiritsis gave in front of live television cameras was so emotional media outlets terminated live coverage believing Kiritsis would shoot his hostage, but he released Hall alive. (Video of the kidnapping can be seen on YouTube with the keywords “Anthony Kiritsis.”) To prove the gun had been loaded, he fired it into the air and immediately was arrested. He was found not guilty by reason of insanity in a 1977 trial that helped define Indiana’s insanity defense. Kiritsis was released from a mental institution in January 1988, after the state could not prove he still was a danger to society. He died in 2005.

The picture which won Blair the Pulitzer Prize showed Kiritsis with the sawed-off shotgun at Hall’s neck. That the picture won the prize didn’t surprise Blair, though he was surprised when the UPI mistakenly credited another photographer for the image, an error that still bothers Blair today. A check of negatives cleared up the mistake, and Blair received the Pulitzer in 1978.

In a story on the 10-year anniversary of the incident in the Evansville Press on Feb. 11, 1987, Blair said several pictures taken during the kidnap-hostage situation were possible candidates for the Pulitzer. “But I’ve taken other pictures that have had impact. That’s the important thing to good photography, to have impact,” Blair said in the interview. “From a news photography standpoint, it’s in the top two or three. I had a couple of heavy-duty ones that night.”

Blair says winning the Pulitzer opened doors for him, giving him entry to some of the top photo markets in the country, including Time and Newsweek magazines.