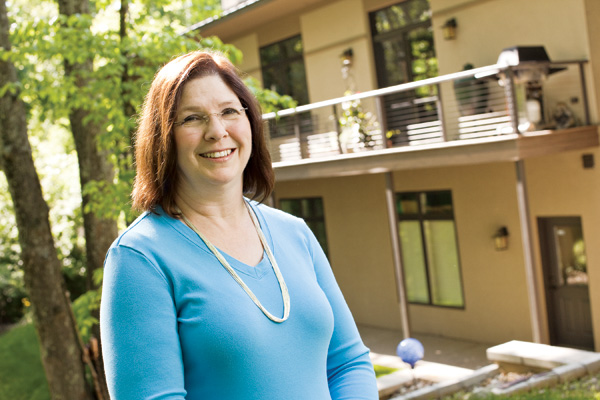 The nine-year director of the Evansville Environmental Protection Agency still sits at the same office at the end of the hall inside the C.K. Newsome Community Center, but since April, Dona Bergman’s daily duties have changed. She’s the first director for the city’s recently created Department of Sustainability, Energy and Environmental Quality (SEEQ). Since 2005, Bergman’s searched for sustainability projects, but she says, “I already had a full-time job, so it was difficult to make much progress.”

The opportunity to use her talents for the position first surfaced in 2008 when the state pulled local contracts from air quality agencies, cutting the EEPA’s budget by a third. In 2009, the federal government told the city it would receive $1.2 million from a grant in the stimulus funds. This money, combined with the budget cut, created SEEQ. The EEPA now falls under the SEEQ umbrella; its new director, Derrick J. Ohning, the former compliance and enforcement manager for the Indiana Department of Environmental Management, gives Bergman more time to think “green.”

Bergman, a University of Southern Indiana graduate with a degree in humanities, says the focus on the city’s energy conservation and green initiatives helps the bottom line. “If we can save money on our utility or fuel bills,” Bergman says, “then we’ve got more money for filling potholes, putting cops on the streets, and keeping the parks nice.”

Environmental regulation is a field that’s grown up in the last 30 to 40 years. For the longest time, there wasn’t a curriculum; there wasn’t a degree. It’s opened up a lot of opportunities. A lot of geologists, engineers, and health professionals ended up involved in it.

I was working at a company doing transportation and logistics. The guy who was doing the air stuff got a promotion and didn’t have time to fool with it anymore. They asked me to take that on. That was about 1989, which was right about the time the Clean Air Act hit. All of a sudden, there were lots of companies that never had to deal with a state regulatory agency.

We’ve had LED stoplights since 2004-2005. Why? Because it saved money. It also reduced our electrical usage and carbon footprint. They last longer, and they’re brighter. We didn’t make a big deal about it. We just did it because it made sense economically and operationally. One of our wastewater treatment plants captures methane and uses it to generate electricity and help power the facility. Why? It made sense. There’s a lot of stuff we’ve done. My job’s to find more.

The first year, I’m going to be focusing 60 to 80 percent of my time on this federal grant. In the meantime, I’ll be looking at other grant opportunities. We’re going to be looking at some solar power and where it makes sense. We could look at wind turbines, although the wind profile isn’t real great around here. But, there are places — sort of an anomaly — where the wind is stronger. There’s opportunity to protect streambeds and habitats to encourage native planting and community gardens.
It’s such a buzzword; you’re going to go “green.” I think it means something different to every person, and I think there’s a lot of organizations and products out there that are just using it to get positive attention or make money. I can sum it up in six words: Reduce, reuse, recycle, replenish, preserve, and protect.

Sometimes, I can carry it to ridiculous extremes: Is it better for me to use a paper or kitchen towel? I do this mental lifecycle analysis. Well, the paper towels come from trees, but the trees are farmed and quick-growing. But, the paper is bleached, and there’s landfill space, so maybe I should use a clean kitchen towel. Well, if I do that, then I have to wash and dry it … so it’s possible to get obsessive about it.