A Slice of Success 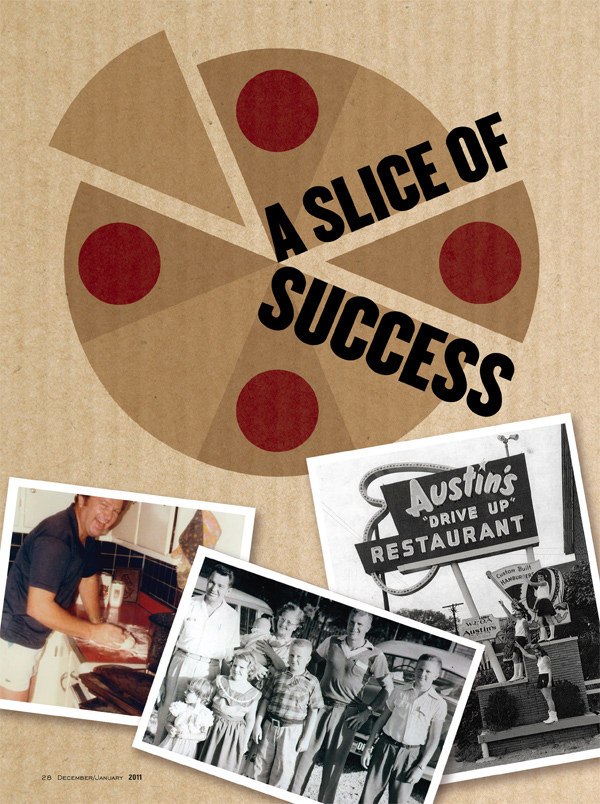 In 1956, weekends at Austin’s Drive-In oozed more retro cool than Johnny Rockets ever could imagine today. When the 80 parking spaces filled up, customers parked down Highway 41 for blocks, much to the chagrin of the Evansville Police Department. Milkshakes, hamburgers, and French fries were ordered on a new electronic system. Curb girls brought patrons their meals in less than three minutes.

Lonesome Larry, a popular radio deejay, broadcasted live from a booth built specifically to play the parent-infuriating rock-n-roll. The whole maddening scene was an example of what a successful restaurant looks like when teenagers run a business. If it wasn’t for the untimely death of their father and original owner, James Austin Hunt, what those teenagers accomplished at Austin’s may never have led to the innovative pizza found in more than 6,500 convenience stores, gas stations, and taverns in America.

After Austin passed away from a heart attack in 1955, he left his wife Matilda and seven children — Don, Lonnie, Jim, Charlie, Mary, Elizabeth Ann, and Theresa — behind. The oldest, Don, was a former Memorial High School football standout on a scholarship at Vanderbilt University two hours south in Nashville, Tenn. Lonnie was barely old enough to drive when the Memorial senior took over the restaurant. He went to school, played football, and ran Austin’s. When Don finished his final semester at Vanderbilt, he returned home and swore Lonnie’s hair was turning white.

Lonnie had help, though. Matilda asked her youngest son Charlie at age 11, “Don’t you think it’s time you went to work?” All Hunt children started in the family business at an early age. At 9, Don peeled potatoes (50 pounds a day), Lonnie sprayed the Dumpster behind the restaurant to kill flies, and Jim and Charlie washed dishes. They grew older, took on new responsibilities, and became intimately familiar with the restaurant business. “I started out at 50 cents an hour,” says Charlie with a laugh. “I worked my way up to 85 cents an hour. Then Lonnie comes to me and says, ‘Our labor cost percentage is too high. I’m going to have to cut you back from 85 cents.’”[pagebreak]

If the task of running a restaurant and finishing high school seemed daunting, Lonnie didn’t know it. Convinced he had discovered the next big restaurant idea in an industry magazine, he spoke to Don about adding the electronic ordering system. They went to a bank, asked for a $40,000 loan, and put their mother’s home down as collateral. Then Lonnie called Larry Aiken, the 16-year-old disc jockey known as Lonesome Larry, to broadcast live from the restaurant every weekend. “I don’t know,” Aiken said at first, recalled Lonnie. “I’ll have to ask my mom.” She agreed, and teenagers soon cruised Highway 41 like it was today’s Green River Road. Within a year, the Hunts paid back the loan.

Decades later, all four would meet by an indoor pool in a Lexington, Ky., hotel surrounded by snow. What they would discuss were the principles they needed to run a business. What they’d find was a new pizza crust that would revolutionize the industry.

In 1962, Don lived in Nashville with his wife when a friend introduced him to a new food craze: pizza. Don thought the market was right in a pizza-less Nashville. He bought an insulated box for the back of his station wagon and took pizzas to taverns, bars, and restaurants.

Three years later, an exhausted Lonnie, 28, was ready to leave the restaurant business. Running a restaurant took hours away from a family man with three young children. As Charlie recalls, after busy Saturday nights, Austin’s closed in the early hours on Sunday, and often Lonnie and his younger brothers worked long after close until 5 a.m. mass. Then, Sunday mornings were for sleeping. Lonnie sold the business and set off on a soul-searching trip through the South. He stopped in Memphis and stayed with Don’s brother-in-law, who showed the second oldest Hunt brother the city where few pizza places existed. Lonnie called Don. “It was the best place in the world to start a pizza business,” Lonnie says.

Lonnie was familiar with food, but he admits he didn’t know how to sell. On his first Monday morning as a salesman, he dressed in a suit, loaded his car with pizzas, and traveled around Memphis. Two days, 35 businesses, and zero sales later, Lonnie popped into a bar at 9 a.m. to sell pizza, but so much rejection left him spent. He sat on a stool, asked for coffee, and never attempted his sales pitch. “I must have looked terrible,” Lonnie says, so the waitress struck up conversation. He told her he sold pizzas. She asked if he put cherries on his pizzas; she thought it was a dessert pie. He brought a tiny oven from his car and baked a pizza pie on her counter. She told him she was the owner and said, “I could sell these like crazy.” Mamma mia!

Jim and Charlie followed into the business. The brothers expanded into more than 20 states selling pizza made by a manufacturer. One by one, each moved into individual business ventures. Don operated from Nashville, Lonnie from Louisville, Jim from Lexington, and Charlie from Evansville. For decades, the thriving businessmen brought pizza to the pie-less. Then came 1990.[pagebreak]

In the 2006 History Channel series American Eats, an episode depicted the evolution of pizza from coast to coast, noting New Yorkers’ omniscient attitude toward pizza, Chicagoans’ love of deep dish, and Californians’ penchant for blending an Italian staple with Asian and Hispanic toppings. The common theme showcased restaurant-centric pizzas requiring big, hot coal ovens. Left out of this history was the every-man’s pizza, a Hunt Brothers pizza.

Sixteen years before the documentary aired, the Hunt brothers looked at their resources. Their businesses combined to cover expansive areas, and what they needed, they thought around that Lexington hotel pool, was a new product. For decades, they’d been selling pizzas with pre-baked crusts. The product was good but tended to dry out quickly. At the time, no one distributed fresh-baked pizza with dough that rose in the oven. Crusts “would be made in a plant because they had to be pre-baked,” says Don. “You couldn’t ship raw dough. It would get rancid. The yeast would work its way out, it wouldn’t rise, and it would be as tough as shoe leather.”

The brothers contacted numerous crust manufacturers and asked for samples of pre-baked crusts. They popped them in small-draw ovens to watch the crusts brown. Finally, “one swelled up,” Don says, “and we couldn’t figure out why.” Don called the manufacturer and learned the wrong crust — a test product — was sent, but for the Hunt brothers, it was the right crust. With the manufacturer, the brothers developed a fresh-dough pizza, the staple of what would become their business, Hunt Brothers Pizza. They wore suits and hit the sales routes they knew well. There was fresh-dough pizza to sell.

Twenty years later, these kinds of crusts such as Kraft-owned Digiorno are found in grocery aisles, but in 1990, this was a novelty. The demand increased. Today, their pizza is available in 6,500 convenience stores, quick stops, gas stations, and taverns in 28 states. Though the brothers — now septuagenarians — enjoy retirement, Hunt Brothers Pizza remains family-oriented: The chief executive officer is Scott Hunt, Don’s son, and Bryan Meng, the son of Hunt sister Elizabeth Meng, is the chief operating officer. He joined the fledgling company in 1994. The excitement surrounding the new product intrigued Meng. Now, more than 20 Hunt family members are part of the 500-person company.

The brothers certainly thought the company would be successful, but none admit they envisioned the reach Hunt Brothers Pizza would have. “We went into stores to be a blessing for the people, the employees, and the store owners,” Jim says. That attitude developed, Don says, over years in the Catholic school system and decades in business. Their philosophy comes honestly, and without it, the Hunt brothers — four non-Italian Catholics from Evansville — wouldn’t have made pizza history.

To find a Hunt Brothers Pizza location, go to www.huntbrotherspizza.com.