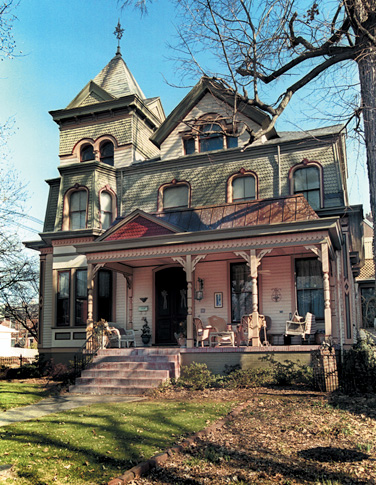 Don’t tell Robin Church Wolf that the only time homeowners run into trouble with the Historic Preservation Commission is when approval is sought after the fact.

Church Wolf, who is treasurer of the Preservation Alliance of Evansville, a not-for-profit group dedicated to historic preservation, thought she was doing everything right when she and her husband, Michael, moved into their home at Southeast First and Mulberry streets in March 1998.

The first year was spent upgrading the wiring, plumbing, heating and air conditioning, patching minor leaks, and doing interior cosmetic work. None of that had to be approved by the Preservation Commission, which has no jurisdiction over interior work.

By the end of their first year in the home, built in 1869, Robin, a special education assistant at Glenwood School, and Michael, a golf pro, were able to lease the second floor as an apartment for visiting executives. Soon they had saved enough money to replace a front porch that had been removed more than 50 years earlier. For the porch, they needed a Certificate of Appropriate-ness from the Preservation Commission.

“We had heard rumors from various downtown people that going before the Commission could be a horrendous experience. We didn’t want to do anything inappropriate,” said Church Wolf, who had a photograph of their home and its porch as it appeared in an Evansville newspaper on Feb. 4, 1906. When the Wolfs took their proposal to the Preservation Commission in early 1999, they thought they had filled every requirement. They had the photograph taken in 1906, a blueprint of the proposed porch by a respected local preservation construction company, and what they thought might be the original porch posts and brackets in their cellar.

“Everyone was very friendly and encouraging, with the exception of Tim Crowley who grilled us on every teeny detail in great degree,” Church Wolf said. When she told the commissioners she had discovered old porch posts and brackets that looked like those in the newspaper photo in her cellar, Crowley expressed doubt that they were from the original porch. He said he could not agree to approve the porch until an expert had inspected the posts.

City Preservation Officer Dennis Au and then-Commission member Rick Tremont volunteered to look at the posts. They did so the following day and pronounced the posts “fine, more than fine.”

“So we ended up getting the porch built, but I understood why people warned us about the meetings. You feel as if you’re at an inquisition, as if you are being interrogated for a crime,” Church Wolf said.

The Wolfs’ second encounter with the Preservation Commission didn’t end as happily. A month or two after the porch incident, a small house at 512 S.E. Second St. was put up for sale. The couple had done so well leasing their second floor that they decided to purchase the little house to fix up as rental property. They had the house inspected and learned that the more-than-a-century-old slate roof had major leakage.

“I couldn’t make an offer on the house until I found out what the Historic Preservation Commission’s policy is on replacing slate roofs, so I called the City Preservation Officer, Dennis Au,” Church Wolf said.

Au told her that while the commissioners would prefer that the slate roof be replaced with slate, they could not force her to do so because of the expense involved. He said the only requirement was that she replace the slate with shingles of the same color. The Wolfs signed a contract to buy the house. [pagebreak]

A couple of days before Church Wolf was scheduled to appear before the Preservation Commission in the spring of 1999, Au called to warn her that the Commission planned to “try to set a precedent” concerning her roof. It wasn’t until she arrived at the meeting that she fully understood what he meant.Crowley, who chaired the meeting, announced that because so many commissioners were absent, every proposal would have to be unanimously approved. When it came time for a vote on the Wolfs’ Certificate of Appropriateness, only Crowley voted against it.

Church Wolf protested that the City Preservation Officer had told her all she had to do was replace the slate shingles with shingles of the same color, that she would not have purchased the house if he had said otherwise. Au remained silent, and Crowley remained adamant, describing the loss of slate roofs in the preservation area as a travesty and compromising only to the extent of insisting upon dimensional slate line shingles, less expensive than slate but double or triple the cost of the roof the Wolfs’ budget allowed for.

“Other people on the commission pleaded my case for me,” said Church Wolf, who was being held to a higher standard than owners of much more expensive homes on the same block. She was left with the choice of replacing the slate shingles with shingles she couldn’t afford or “letting the house rot.”

“I had to bite the bullet and put on the slate line roof,” said Church Wolf, who “barely broke even” when she sold the Second Street house last fall.

She said she hesitated to speak out after hearing about the slander suit with which Kathy Oliver was threatened.

“I decided I had to speak out to support Kathy. Nothing will change if people are afraid to get involved,” she said.

Church Wolf wrote to the mayor’s office last November, complaining of the Preservation Commission’s treatment of homeowners and its negative effect on the preservation area and Evansville’s downtown. After more than two months, she hadn’t received a response from Mayor Russell Lloyd, Jr.

However, the mayor told Evansville Living he was going to make a point of seeing if the Preservation Commission had been acting “in keeping with its mission.”

“I think it has, but I will see what others have to say,” he said.

The mayor emphasized the need for “balance,” adding that “You often can’t use the same building materials – such as slate roofs.”

Church Wolf said that as long as the Commission continues to function as it has, she will buy no more property downtown.

“I would like to put a back porch on our home, but I’m not going to touch that with a 10-foot-pole,” she said.