Ahead of the Curve

No matter the location or size of a project, there is one philosophy that ties together the architects, designers, and engineers of Hafer — passion for their community.

“We, on purpose, have stayed focused here,” says company president Jeff Justice. “We do projects seven or eight hours away, but the ones that really get us excited are the ones helping this community.”

Evansville and the surrounding areas are dotted with work from the architectural, interior design, and engineering firm. From the Griffin Center, a recent addition to the University of Southern Indiana campus, to the office space at 21 S.E. Third St., which Hafer calls home, the influence of the firm is seen and well-known throughout the Tri-State.

Hafer’s beginning is a story not too different from many small businesses in the southern Indiana area. Ed Hafer laid the groundwork in 1978 when he opened Edmund L. Hafer Architect, Inc. and hired fellow architect Steve Pugh. The team would grow by one with the addition of David Wills three months later.

Since that time, Justice says the company has spent the last 39 years growing organically. Today, Hafer boasts 44 employees across its disciplines. When he thinks about it, Justice says he’s not surprised by the outcome at all.

Part of that growth included expanding the firm from solely architects to include engineers and interior designers as well. It was a move Justice says changed how Hafer was able to approach projects.

“Having all services in house enhances collaboration making our solutions better,” he says.

Hafer vice president Ron Steinhart most likely would not have a position at most architectural firms. As a mechanical engineer by trade, it would be more common for him to be at a separate firm brought into a project to work with an architect.

At Hafer, however, things are a bit different.

“In other cases, you may hire a consultant who has other priorities or other goals,” he says. “Now, those goals all are Hafer goals. It makes for a much better project.”

A graduate of Rose-Hulman Institute of Technology, Terre Haute, Indiana, Steinhart has worked at Hafer since 1994. He along with Justice make up the eight principals of the business. These eight owners of Hafer represent both the architectural and engineering branches of the company.

“Therefore, we have a balanced perspective on the direction of the firm,” says Justice. 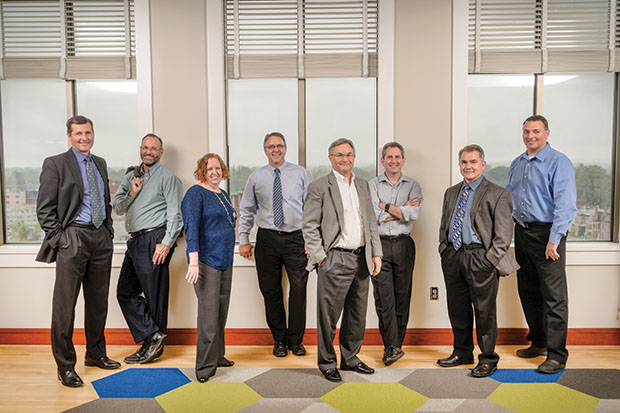 Over the last four decades, Hafer has had their hands and solutions in many projects. Evansville airport’s move to Highway 57 north of the city; the Vectren headquarters along the riverfront; work on the Deaconess Gateway campus; the USI Rice Library; and the new Linda E. White Hospice House all tout the design of Hafer. Both Justice and Steinhart attribute the diverse background of Hafer employees to the achievements of their projects.

“We have experts in health care, education, corporate, and civic work. I’m looking forward to how that’s going to continue to help our clients in the future,” says Steinhart.

Success for Hafer has not only been attributed to the employees, however, but also to the fact the firm is willing to take on projects of all sizes.

“We do the small, the dirty, the tough,” says Steinhart. “It’s great to have the big projects — they are prominent in the communities we live in. But we tackle all kinds, all sizes.”

Not limiting the firm to certain size projects has helped maintain client relationships as well, adds Justice. Because not every project is large for a client, working on smaller needs helps Hafer learn more about what is important to a client, how they keep their business going, and keeps the lines of communication open.

“So when the big projects come, they continue to trust us and there is not a learning curve because we understand,” says Justice. “There is a number we use all the time and that’s the fact that about 90 percent of our business comes from repeat clients on an annual basis.” 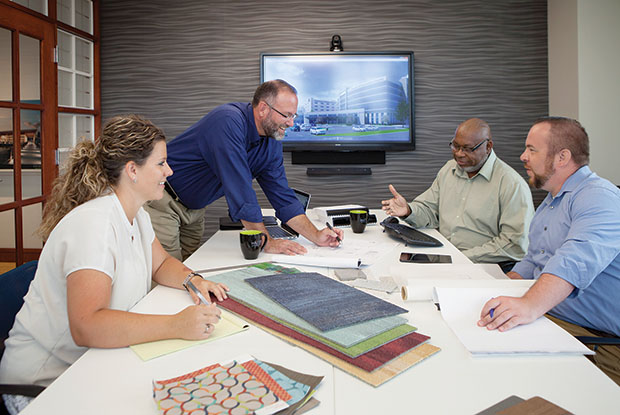 Jeff Justice has built his career at Hafer.

“I was born here,” he jokes with a broad smile.

The statement is not far from the truth. Justice has built his career at the firm, starting in 1981 when he took on an internship during his freshman year at the University of Cincinnati. Through a co-op program, he worked at Hafer doing a little bit of everything from running prints to completing errands.

“I came back after graduation (with a bachelor’s degree in architecture) just to kind of get my feet on the ground and figure out where in the country I wanted to go,” he says. In the end, he never left.

“At the time we were working on great projects. My first project out of college was the State Office Building in Indianapolis. I also worked on the Swonder Ice Arena and Victory Theatre restoration. I was excited about those,” explains Justice. “The firm offered great opportunities for me. I got to wear lots of different hats, got to understand all aspects of the business, and those experiences never stopped.”

A native of Evansville, Justice would capitalize on those opportunities over the years and build his career. He and his wife Nona and their two children continued to grow in Evansville as well. Eventually, Justice was named president of Hafer in 2004. Along with offering perspective on the firm’s many diverse projects, he was given the responsibility of shaping the strategic vision of the company.

Though he was excited to be given the opportunity to lead the firm where he had made his career, he says his first thought was about sustaining the culture of Hafer.

“I soon realized it was going to be very easy because of all the people around me,” he says.

So Justice began to look at ways Hafer could take what the firm had learned and build it into the next generation — taking advantage of the creative talents of a younger generation of employees, combining it with the well-established practices, and furthering that growth even more.

“When you give people opportunities, it’s surprising what we can accomplish,” says Justice. 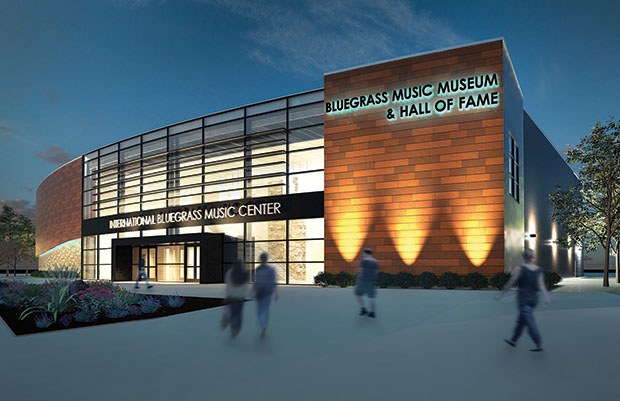 ▲ By working on a variety of projects, Hafer president Jeff Justice says the firm keeps relationships going with clients. Above, Hafer has a hand in the design of the new Bluegrass Music Museum & Hall of Fame.

People who come in to work at hafer are not there by chance, says Steinhart.

When a designer, an architect, an engineer, or marketing coordinator is hired to the Evansville or Owensboro, Kentucky, office, it is because they not only bring in a special skillset, but they fit into the firm’s culture as well.

“We have a fun atmosphere and a hard-working group — one that takes a lot of pride in what we do,” says Steinhart.

For marketing director Jill Rawley, that fun culture manifests in telling Hafer’s story to the community and prospective clients.

“It’s an easy story to tell because we have such great people and such great projects,” she says. “Everyone is driven with a passion to help other people. I think that’s the basis of what we do — designing to make this a better world.”

The firm doesn’t shy away from a family-like, close atmosphere. Celebrations for milestone birthdays, a viewing party for the recent solar eclipse, and office-style Olympic competitions are just some of the activities held to keep things light at the office.

“We do a lot of things that get people together, to spend time together, not just all work,” says Rawley. “I think that helps build the team.”

“You have to be able to laugh at yourself to work here at Hafer. Nobody is immune from a joke. Although I am getting a little tired of the short jokes,” adds Justice with a smile.

Jokes aside, the employees and associates at Hafer strive to use their skills for the betterment of local business and community. Justice, Steinhart, and Rawley all agree the philosophy of putting clients first not only pays off on current projects but future projects as well.

“Our goal is to make everyone around us — the people who we work for or the team — be successful,” says Justice. “If they are successful, then that success comes back to us in a great measure.”

It’s a belief among Justice and the others that success for all parties comes through trust. Clients trust Hafer because employees go above and beyond without question, says Rawley.

“They work so hard. They are not just going to quit at 5 p.m.,” she adds. “They are accessible around the clock.”

“Once a client or organization understands we really are motivated by being good stewards of their resources, they look at us in a different light,” says Justice. “That’s part of the trust.”

The legacy of Hafer’s commitment continues to pay off as projects near and far are awarded to the firm. Current construction projects like the Bluegrass Museum in Owensboro, Kentucky, the new McCutchanville Elementary school, and Tropicana’s land-based casino will give way to new work at the Evansville Regional Airport, Jasper Parklands, a new urban park in Jasper, Indiana, and more. The team at the firm believes from those relationships, even more projects are sure to come.

“For us, we’re just excited for the next wave,” says Justice. “And with everything happening in Evansville, we’re confident it’s coming.”