All in This Together 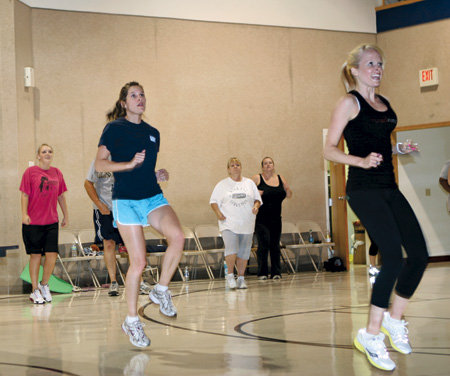 Inside the Memorial Baptist Church gym on a Monday night, the lights dimmed, and a glow from the projector heightened my anxiety. Someone pushed “Play” on the DVD player, and the Beachbody workout ChaLean Extreme — a nonstop, cardio-heavy, fat burner — appeared on a giant screen. I had a hard time keeping up. These exercises were not the basic squat and push-up variety. The moves had names such as “Heels to Heaven,” but there was nothing heavenly about them.

The Scoop
A recent Gallup survey showed 37.8 percent of Evansville’s population is obese, compared to the national average of 26.6 percent. We’re the fattest city in the United States (ranked the third most obese country in the world). Crystal Paul, an employee of a natural gas provider, is disappointed. “We are such a strong country,” she says. “You’d think we’d be able to figure this out.”

Since early June 2011, Paul has been doing her part by leading an exercise program at Memorial Baptist Church. Known as “Monday Night Fit Club,” the concept is a grassroots effort pumped out by Paul’s friend and co-host Tiko Blane, a certified personal trainer.

It began in late 2010 from a small living room at a West Side apartment when a group of friends popped in an exercise DVD and made each other accountable for their fitness. Word of mouth spurred interest in the group activity, and less than a year later, nearly 50 people regularly gather at the church gym Monday evenings for cardio and weight training workouts designed by Beachbody, a company of fitness programs that include P90X, Insanity, ChaLean Extreme, and TurboFire.
The best part: It’s free for anyone in the community. “We are focused on helping other people to get motivated,” Paul says. “We’re all trying to shoot for the same goals.”

The Verdict
It wasn’t just the workout that got my attention. I loved the camaraderie of the people who had suffered through it with me.