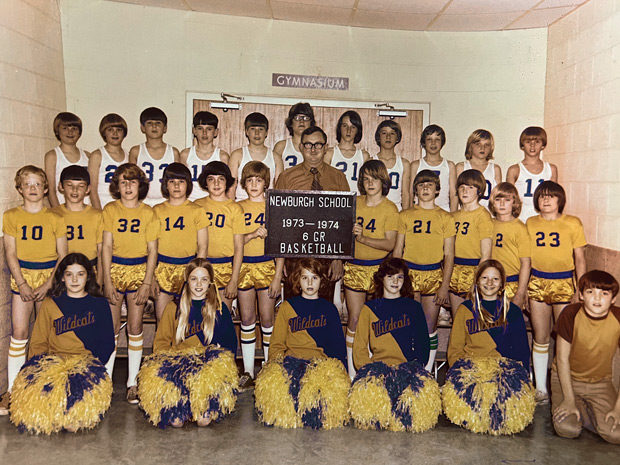 On a recent cold and snowy morning, while taking a rare day off at home, I received a text from Dr. Chris Gilkey, a Newburgh, Indiana, chiropractor and friend of more than 50 years. Glad to drop what I was doing (decluttering my son’s walk-in closet … yep, that’s a day off), I stared at my phone and was very pleasantly surprised. There staring back at me was a photo I had not seen in decades: my Newburgh Elementary School Wildcats sixth grade basketball team and cheerleaders.

I started at Newburgh Elementary School in first grade with almost all of the people in the circa-1974 photo, and we graduated from Castle High School together. Unfortunately, a few are now deceased, and three in the photo moved away and did not complete high school with us; I still wonder about them on occasion. Still, I am confident this photo is held in the highest esteem by all pictured. It’s from the year we won the sixth grade basketball championship after constantly being beaten by our rival John H. Castle Elementary School at seemingly every turn over the years. They had our number, but not this time.

We played the game of our lives and pulled it off. I know I am not the only one who still has their piece of net after we cut them down. I would imagine that no matter what some of my teammates in the photo have accomplished in their lives, this remains a can’t-forget, major moment. In two short years, Castle Junior High School (now named Castle North Middle School) would open, and rivals no more, we would all become classmates. But not then; not that day.

I was reminded recently of the mentality our sixth grade team had … even if it only was for one game.

Anyone watching the Buffalo Bills-Kansas City Chiefs NFL divisional playoff game on Jan. 23 saw the Chiefs’ refuse-to-lose mentality. Two nights prior, my alma mater, the University of Evansville, had lost by 38 points to Illinois State University in a men’s basketball road game, only to play the same team at home on Jan. 23 and win by three. This is part of the reason I love athletics: They are ripe with life lessons that go far beyond the playing field. And in that tiny Newburgh Elementary gym, with tile flooring and cafeteria tables that folded into the walls, we too were up on top of the ladder, each claiming our piece of the net in victory. It was and is no less special to me.

After a few more texts from Old Man Gilkey, he challenged me to name everyone in the picture, now 48 years in the past. I thought, are you kidding? That was child’s play. All these years later, a texted photo invoked a flood of terrific memories and served as a reminder of what is really important: Lessons learned, sixth grade and today. And don’t be dissing the photo; we rocked those uniforms.

As always, I look forward to hearing from most
of you.