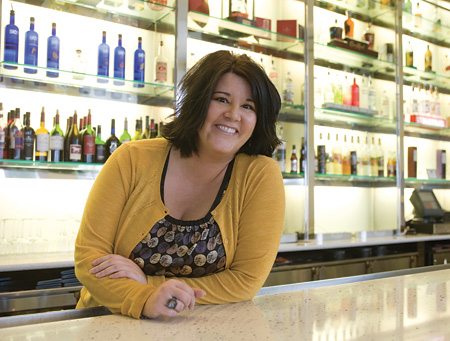 On New Year’s Eve 2006, officials from Casino Aztar ushered in a new resolution: to attract visitors to Le Merigot, their new boutique hotel. They wanted their second hotel to offer more than comfort to visitors. It was to inspire relaxation. Ninety-six rooms came stocked with amenities: Italian bed linens, goose-down duvets, thin-screen televisions (including one in the bathroom), and a shower with multiple body sprays and a rainforest showerhead. Advertisements for the ultramodern venture used phrases such as “lavish whisper” to describe the experience.

In reality, the quiet could have been from the lack of customers. “I had never seen something like this small, boutique hotel. I wondered, ‘Is it going to be the right fit for Evansville?’” says Amy Harrelson, Casino Aztar’s director of hotel services. The Mount Carmel, Ill., native and University of Southern Indiana alumnus took the gig one month before Le Merigot was set to open. She had returned to the River City after years with an international hotel chain in Indianapolis. Harrelson’s temporary home upon her return was Le Merigot. She worked and lived at the hotel.

A year after its opening, Harrelson notes the hotel stopped feeling new and started feeling established. People, she says, started giving it a chance. Five years later, corporate travelers call the hotel home from Sunday through Thursday, and the weekend brings a more party-ready, casino crowd. The latter inspired a second pedestrian bridge at the casino’s complex connecting Le Merigot to the riverboat (scheduled to be completed by year’s end). “The week is completely different from the weekends,” Harrelson says. “It’s like we transform on a Friday.”

The only jobs I’ve ever had have been in the hotel industry.

My first job was when I was 19 years old. The Marriott on Highway 41, which is now a Holiday Inn, was looking for a front desk clerk. I thought, “I’ll try this out. I think it will be a lot of fun.”

I’m an out-going, people person. In the hotel industry, every day is something different, but I will always be meeting new people.

A lot of our customers weren’t familiar with this concept. They felt a little more comfortable at the Casino Aztar Hotel.

We hear people rant and rave about the shower.

The menu for Blush (the hotel’s bar) included tapas in the beginning, and we had a sushi bar. It was a nice concept, but it just didn’t hit here. With our corporate travelers during the week, we now have a happy hour for anybody from 5-7 p.m., and free hors d’oeuvres. That’s what our customers during the week want. On the weekend, it serves a little bit of a younger crowd. It serves the nice martinis, but the idea was originally to do bottle service. That just wasn’t a big hit.

I was a judge at our Halloween contest at (the casino), and as I was driving home, I saw that there was a line wrapped all the way around Stoney’s Rockin’ Country (a club across from Le Merigot). It was definitely crazy. I will say that Stoney’s brings more people in, and it’s harder to find parking, especially on a Saturday.

I spend most of my time in a hotel, and when my friends and family want to go away for the weekend, I think, “I’m always in a hotel. Let’s do something else.”