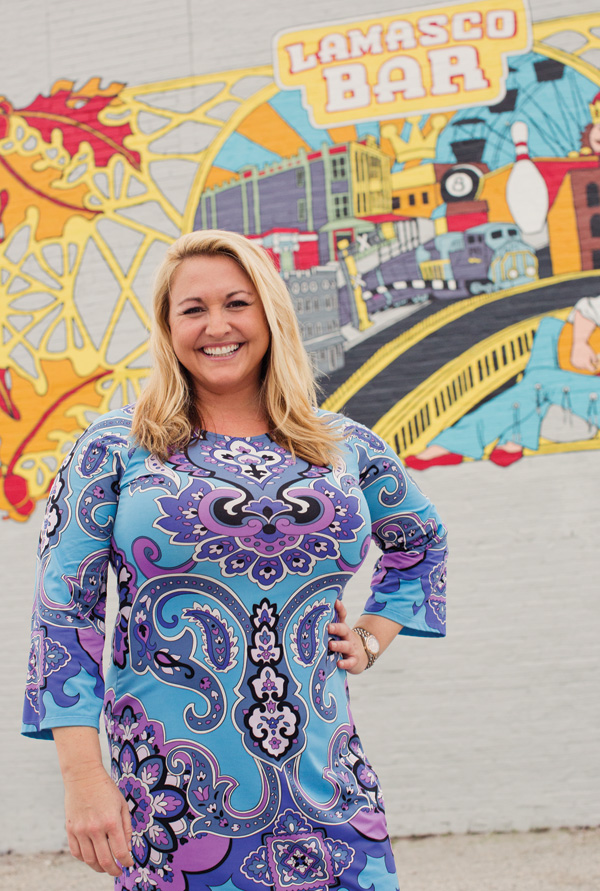 Job: Proprietress at Lamasco Bar and Grill, co-owner of Let The Good Times Roll Pedal Bar, co-owner of the soon-to-open The Dapper Pig, and president of the Franklin Street Events Association.

It would be safe to say that Amy Rivers-Word is ubiquitous on the Evansville social scene. Her Lamasco Bar is one of the premiere music and drinking establishments in the region. Her relentless work promoting Franklin Street through the Franklin Street Events Association has helped make the West Side a destination for the entire Tri-State. Her next projects include the human-powered Let The Good Times Roll and The Dapper Pig, a Haynie’s Corner restaurant with former Farmer’s Daughter (Princeton, Indiana) owner Sarah Wolfe. This daughter of teachers has learned a lot on her journey. One chat with this driven woman tells you there’s a lot more to come.

You are an Evansville native. Tell us about growing up here.
I went to Memorial. I grew up in the Lincolnshire neighborhood which is right by Reitz Memorial High School. My mother is a Vezzoso, which is a deep West Side family. My grandfather’s business, Allied Erection, was right here on Franklin Street, which is kind of cool.

It was fun. I’m the oldest of seven brothers and sisters; that in and of itself was constant entertainment. It was a great childhood. There was always adventure. My Italian roots means fabulous food and we absolutely embrace family.

When did you start to think you could be an entrepreneur?
I became a teacher and worked seven years in Evansville Vanderburgh School Corp. I thought that was my only life path. But in college I bought a duplex to help get me through school with renters upstairs, so that spirit was there.

My aunt called me one day to tell me she was selling Lamasco — not in any way, shape, or form to sell it to me — she just wanted me to help spread the word. This was August of 2009. I had a dream that night that I bought Lamasco and turned it into a music venue and changed all the things. I thought, “My parents are going to absolutely kill me.” I told them that I wanted to quit teaching and buy a bar. I asked my entire family to give me 24 hours before they gave an answer. Everyone was absolutely supportive.
It was mine four weeks later.

Well I didn’t know that buying a restaurant during the greatest economic collapse since the 1920s was probably not the greatest fiscal decision. Having no hospitality experience, having no restaurant management experience, except I waited tables at the Ponderosa when I was 15. I didn’t know how epically it shouldn’t have worked. That really worked to my advantage. I’m a good problem solver and a good people person. When you put those things together that’s a huge part of what this industry is. I make tons of mistakes, but I try to never make the same mistake twice. Obviously, luck is a huge part of it.
And hard work.

What is your vision for your community?
The West Side was originally Independence, Indiana. That goes to the German roots and the self-sufficient nature and taking care of each other. People talk about “West Side Pride” and it’s been here for 150 or 160 years. It’s not somebody’s “vision.”

I had someone say, “We don’t even know what you’re excited and cheering about but we are jumping on your team!” You can become a champion for something very quickly and I think that’s what I’ve been able to do. Now we’re telling our story in a much better way than we have before. I love being able to be our No. 1 storyteller. We are all little beacons of light out there on Franklin Street. We put those lights together and there’s a shining mass you can’t help but see.