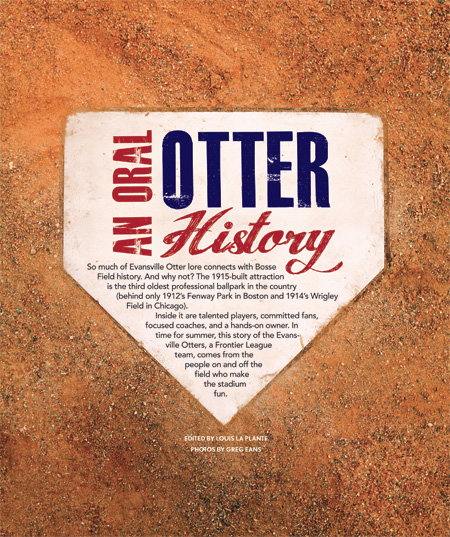 So much of Evansville Otter lore connects with Bosse Field history. And why not? The 1915-built attraction is the third oldest professional ballpark in the country (behind only 1912’s Fenway Park in Boston and 1914’s Wrigley Field in Chicago).

Inside it are talented players, committed fans, focused coaches, and a hands-on owner. In time for summer, this story of the Evansville Otters, a Frontier League team, comes from the people on and off the field who make the stadium fun.

Bill Bussing, owner: I am terrible at baseball. Really! I’m slow. I’m uncoordinated. But I love the game.

Brenda  and John Brazelton, host family for Otter players since 1995: The Otters didn’t ask us many questions. I thought, “We could be axe murderers,” but we’ve done it ever since. They come from Canada, Hawaii, Texas, California, all over. We’ve had maybe 60 to 65 guys come through here, but we lose track.

Gregory Alexander, outfielder: I went to a try out for the (Philadelphia) Phillies, and I guess they called the Evansville Otters to have me on this team. I’ve been here ever since.

Billy Killian, catcher: As far back as I can remember, my dad had a bat in my hand and a wiffle ball. I was originally drafted by the San Diego Padres in the third round in 2004. I got traded to Texas (Rangers) at the end of ’05, traded to the (Chicago) White Sox after ’06, went to the (Baltimore) Orioles after that, and was with the (Pittsburgh) Pirates last spring. I’ve made the rounds.

Mike Radomski, Otter broadcaster: If this organization doesn’t take a chance on someone who was 22 last year, I don’t get to do what I love. I live the dream. I’m at this amazing ballpark every day.

Andy McCauley, manager: I came in (to Bosse Field) to try and hopefully salvage something from last year and hit the ground running this year.

Preparation
Bussing: We bought the team in 2001, and I have not missed a game yet.

Killian: When I first got here last year, I drove down, and there was a high school game going on. I just came out to the park because I wanted to see where we played. I had heard things about it with A League of Their Own (filmed at Bosse Field in 1991) and the Detroit Tigers had a Triple-A team here with a lot of historically good players. I just sat in a seat back here with quiet time when the kids were getting off the field and the lights were still on. I could feel the history of it, and for me, that’s an important thing because I miss that kind of older type of baseball that was played back in the ’40s and ’50s, when it was purely about the game.

Bussing: I have seats behind the plate. I try to sit there particularly when my wife comes. Often, I’m up and talking to people. It’s really a big production, and if I see something wrong, then I must fix it before anyone else notices. I’m all over the place. I should be sitting down. People sometimes think I’m the custodian.

McCauley: This is a 12-month thing, trying to put this team together. In October, the release list comes down, so in October, I’m going through lists and lists of names trying to see who would fit. I’m also making contact with players from last year to see who’s coming back and who’s not.

Bussing: To try to field a competitive team — that’s proven to be a real challenge lately because the league has improved so much. We were in the finals three out of four years. Since then, we have struggled through no lack of effort, but I think the other teams in the league have gotten better. All those factors play in — the record, the weather…

Killian: We only get about two days off a month. People ask, “So every day you get off the bus and play?” Yes, we get off the bus after 10 hours and play. We’re in there every day for nine innings — rain, shine, bus ride or not. I get here at 1:30 and don’t usually leave until 11.

McCauley: Well, I try and take a kid that’s going to be successful not only in this league but also could have a chance of moving on. So, that’s kind of what I look for, and first and foremost is the success.

Killian: I’m trying to get the best out of every guy every time I get on this field. When I was younger, it was more about me and what I wanted to do. But now, I get a lot more joy if a guy goes out on the mound and he pitches a great game. I feel good about that knowing I just had a part in that.

Bussing: There’s so much baseball on television, too, that people easily can stay home. So we have to make a compelling case for people to come to Bosse Field. That’s a challenge, but it’s fun to try to think of ways to get people here and to keep them. It just requires constant innovation and listening to fans and trying to respond to their remarks.

Radomski: My days start around 6 a.m. every morning. I have to make sure everyone has a stat pack, roster, or game notes. These stats — such as how a player has done against a left-handed pitcher — aren’t written out somewhere. I have to dig, and if I keep digging in that hole and I find it, that’s like finding gold.

John Brazelton: The last three guys that were here (in the Brazelton home) went through about a dozen eggs every day. Maybe a pound of bacon, a half loaf of bread.

Killian: I’m usually in here between 1:30 and 2 with lunch. I like to take my time, so I’ll slowly get changed, eat lunch, go out to the cage and hit a little bit, come out, take my time.

Alexander: I just sit in the locker room, listen to some music a little bit, just try to get my mind ready for the game.

John Brazelton: We give them road trip meals.

Brenda Brazelton: We don’t. The Booster Club does.

Bussing: We have the playground over across the street and the swimming pools over there (Garvin Park). It’s just a terrific setting. It’s baseball like it should be. If you go to some of the newer stadiums, they are out in the suburbs; you have all parking lot around. This is a real urban setting where people actually walk to the games. We have people on Sunday afternoon games ride their bikes and hook them up front.

Alexander: I had a home run last year on my birthday (on June 29). That was pretty cool. I had turned 25.

McCauley: Greg Alexander really had the knack for walk-off runs (a game-ending score) last year. There were a couple games where we walked off here at home, which really adds the excitement.

Bussing: There’s so many people here every game who we know — friends, former classmates, clients, people from church, neighbors. That’s one of the fun parts about coming to a game. It’s more of a social function than just an athletic event. More than half the people are here, not just for the baseball, but because it’s an entertainment experience, not an athletic event.

Alexander: Fans get very excited. They make me happy. I don’t mind signing autographs. We had some kid one time saying that he was going to college to be an Evansville Otter. I thought that was pretty cool.

John Brazelton: All these years, we’ve never had a bad player.

Bussing: We haven’t won (a championship) since 2006, which is very disappointing. But, on big nights when there are a lot of people here and we are playing well and the weather is nice, it’s just a great place to be.

Killian: Mr. Bussing’s gone out of his way to make life good for the players, the fans, the people in this city. We’re really trying our best to pull some wins through for him because if anyone deserves a winning team, it’s him.