As the race for mayor nears the general election on Nov. 3, Evansville citizens work to more closely examine the candidates for the position. Those on the ticket this year include Republican and Incumbent Mayor Lloyd Winnecke, Democrat Gail Riecken, and Independent Steve Wozniak. To help prepare voters before casting their ballots, the staff of Evansville Business Magazine asked each of the three mayoral contenders the same five questions.

What is the biggest problem facing Evansville that not enough people are talking about?
The city is facing unfunded federal mandates from the U.S. Environmental Protection Agency to upgrade our water and sewer system. The current systems in place were constructed decades ago, and the city has kicked the can down the road for years when it comes to upgrading the outdated infrastructure. We’ve begun taking steps to make these improvements, while at the same time limiting the burden on ratepayers and holding the line on government spending.

What is Evansville’s greatest opportunity in the next four years?
Our greatest opportunity over the next four years lies on the same forward moving path we’re on today. Jobs are growing, our streets are cleaner and safer, and we’re experiencing revitalization all across Evansville. There’s no question we’re heading in the right direction, but with continued growth, and completion of the development and revitalization projects already in progress, I know the best is yet to come.

Describe, with specific examples, how you would improve the city’s economy?
We’ve partnered with local businesses, while advertising our city as a landing spot to companies looking to relocate. Our economic climate has been nationally recognized three times over the past year as a top 10 city for business.

I’m committed to staying on the current course, which has led to 2,400 new and retained jobs, millions in new investments, and the lowest unemployment rate in five years.

What is your vision for Downtown Evansville once the Indiana University medical school and research center has been built?
The medical center, along with our new convention hotel, will transform the look and feel of Downtown for decades. The hotel will generate thousands of new visitors and the medical school will create a new pipeline of healthcare professionals. Going forward, we need to leverage these two great assets to attract even more visitors and businesses to Downtown.

Just for fun, tell us what your favorite Evansville “hidden gem” is.
There are many hidden gems throughout Evansville. Some are nonprofit organizations which provide badly needed services; others are little known attractions that serve our community; and there are scores of restaurants that service taste buds all over the city. To pick just one … I’d have to say the Wesselman Park Nature Center. 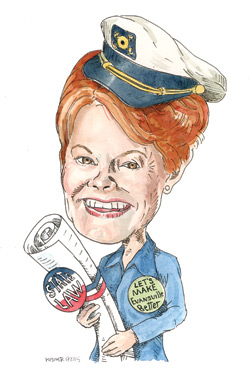 What is the biggest problem facing Evansville that not enough people are talking about?
Our city’s debt has grown to more than half a billion dollars. He (Mayor Lloyd Winnecke) spends money the city doesn’t have, tapping into the city’s reserve funds with no plan to increase revenue or reduce expenses. This debt eventually can have a negative effect on the city’s finances.

What is Evansville’s greatest opportunity in the next four years?
Economic development from the new Indiana University medical school and research center.

Describe, with specific examples, how you would improve the city’s economy?
I would do this with an Evansville First policy, which would help local small businesses compete for city contracts
by stressing contracting with local businesses for goods and services. I would work to attract new businesses to Evansville by offering tax incentives to businesses that want to locate to Evansville and incentives that are published and fairly applied without personal likes and dislikes.

What is your vision for Downtown Evansville once the Indiana University medical school and research center has been built?
I want to promote the new Indiana University medical school complex to businesses interested in medical research and device manufacturing, work to develop lodging for students and staff at the facility, and keep fighting in Indianapolis for the inclusion of Ivy Tech Community College of Indiana in the next state budget.

Just for fun, tell us what your favorite Evansville “hidden gem” is.
Wesselman Park Nature Center 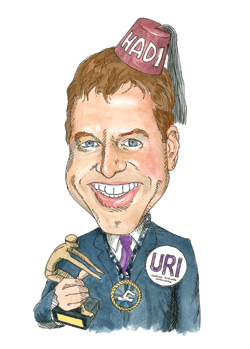 What is the biggest problem facing Evansville that not enough people are talking about?
The City of Evansville has become stagnant and is not progressing with a comprehensive plan. There are many needs of the city that need to be addressed to solve problems that currently strangle our city, with no plan of action to resolve these issues. There is a concerted effort by surrounding cities to progress with new ideas and developments that provide opportunities to their residents and visitors that the City of Evansville is not addressing.

What is Evansville’s greatest opportunity in the next four years?
The implementation of a comprehensive Urban Renewal Initiative, URI, will give rise to our greatest opportunity. First, the building of a new port will open the entire bend in the riverfront for commercial and residential development. Second, a new civic center built with industrial agriculture will alleviate our blocked Main Street. This proactive movement will help to “woo” Google Fiber to choose Evansville as one of its next Google Fiber Cities.

Describe, with specific examples, how you would improve the city’s economy?
Updating the city’s communication infrastructure with FTTH, Fiber to the Home, would attract innovative businesses to start new ventures or expand existing businesses to meet the demands of technology. Case in point, proven industrial agriculture is a soon emerging economy and I, as the next Mayor of Evansville, will attract these innovative start-ups to suit the needs of processing raw materials into finished goods to create jobs for the people.

What is your vision for Downtown Evansville once the Indiana University medical school and research center has been built?
Through the implementation of the URI, Downtown Evansville will be a thriving urban setting that will complement the new urban campus to the City of Evansville. Indiana University School of Medicine is one piece of the puzzle that will be flanked by large-scale residential and commercial development, a new civic center, a new riverfront, and a gateway creating the Soldiers and Sailors Memorial Coliseum into the icon of the City of Evansville.

Just for fun, tell us what your favorite Evansville “hidden gem” is.
The “hidden gem” of Evansville is the magnificent Bosse Field. Bosse Field is the third oldest baseball park in the U.S. and has the potential to be the catalyst that will prove to revitalize the neighborhood surrounding Garvin Park. This new development will come to be known as Bosseville. Bosseville, being very unique and well planned, is not to be mistaken with Wrigleyville, which surrounds the second oldest baseball park in the country.