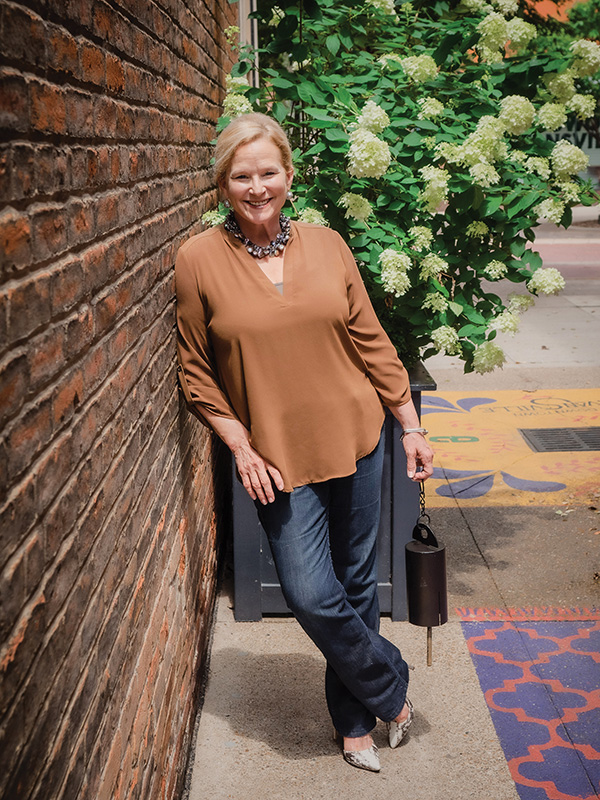 When you ask Lynn Miller Pease the secret to her more than 20 years of success with Leadership Everyone, she’ll say it’s all about having fun.

Serving as CEO since 2003, Miller Pease has led the nonprofit through new programs, such as the community visioning process VOICE and rebranding from Leadership Evansville to Leadership Everyone in 2019.

“I think what was happening — at least in my past and what I would see other people doing — they were afraid that if they were having fun, it wasn’t work,” she says. “I’m saying it’s the opposite of that.”

A 1988 leadership training class alumna, Miller Pease’s passion for LE is in her blood. She is the daughter of Sara Davies, a member of LE’s inaugural 1977 class and former executive director who died in 2003. Mother and daughter have even both received the Governor’s Sagamore of the Wabash award.

“My mother asked all of my siblings and I to go through Leadership Evansville at the time,” says Miller Pease. “I took her up on it. Now I will say I paid my tuition in full; it was no free ride with my mom. And I got the experience and I loved it. It was such a game changer for me.”

How did it feel to win the Sagamore of the Wabash award in 2021, especially since your mother was a past recipient? Does it feel like you’ve followed in her footsteps?
Mother was really independent and decidedly who she was: very active, very forward-thinking, not a reflective person. We were in such a partnership by the time I took over. I don’t think she thought of it as footsteps; she thought of it as how to keep LE going. Everything was about, how do you advance the game of leadership?

She was very supportive and was also really good at letting me do things in my style. And I admired that, but I still feel very close to her. And it’s neat that some of our work is entwined so that keeps her memory alive too.

But what was so lovely is Lu Porter nominated me for (the award) — she’s a past president of Leadership Evansville but also one of my mom’s dearest friends. So, the beauty of it is that Lu made this happen. I was so surprised and so honored. And it was just such a cool thing to share with my mom.

What is your favorite part about LE?
I like seeing the lights come on in people’s eyes, whether they come into a retreat and they’re not sure they want to be there, they don’t know what it’s about, but by the end they’re just on fire; that’s so wonderful.

It’s what happens when we get to share. So, we get to share resources, credit, responsibility, ideas, visions, hope, love, servant leadership. I think maybe my favorite part is that we just get to share. There’s not a lot of “no” in my organization.

You make the job fun, but what does passion have to do with productivity?
If we know what we’re good at and we care about it and we’ve made a commitment, work itself feels right. It doesn’t feel like the struggle. It’s more about, “Wow, I can do this. What else can I do?” And in that, if you can enjoy yourself and have a little fun when it’s appropriate, even better.