A little slice of heaven — that’s how Jane Hayden describes her garden.

Encompassing the backyard of the large ranch-style home she and her husband Gary have lived in for 35 years, the garden is a simple, quiet sanctuary for the couple on the East Side of Evansville, along Mulberry Street.

“It’s my retreat before I get my day started,” says Jane. “I picture heaven like this someday for me.”

The space centers on a large pin oak tree that sits directly in the middle of the quiet oasis. The massive tree is well over 100 years old, Jane says, and survived a lightning strike 15 years ago.

“The lightning went all the way down it, but I don’t even think you can see where it hit much anymore,” she says. “They said it would never last after it was struck, but it’s still here.”

Jane has been the primary caretaker of both her back and front yard landscaping. Though she originally received help from Landscapes by Dallas Foster on the design of her landscaping in the front of her home and some in the back — and from Kraft Landscaping later on with setting up the patio area which is covered in flagstone — she now handles the trimming, planting, and maintenance herself.

“It’s just been something that has been a project for me every year, to go out there and do something else. Add a little bit of something,” says Jane. 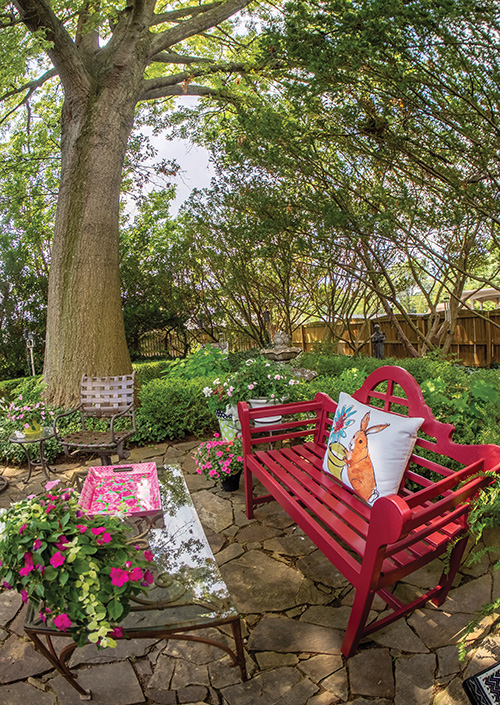 The Hayden garden is filled with vines of ivy and pots of various annuals including petunias, impatiens, hyacinths, and more. Boxwood shrubs line the small pathways that cut through the back portion of the garden, and young yew trees guard the property’s fence line, offering even more shade and privacy to the retreat. Ivy covers much of the landscaping near the paths, and nestled throughout are various wild ferns and plants Jane has found through the years.

Near the paths, Jane has placed various statues of different small figures. A water fountain babbles near the patio under the large pin oak. There also is a bronze statue of Saint Francis, the patron saint of animals and nature.

“My children gave it to me, and it’s special to me. They put it back there one Mother’s Day,” she says.

Entering the garden from the back of the house, guests are immediately greeted by a courtyard perfect for an evening gathering with friends or a reflective morning with a cup of coffee. Jane and Gary also have outfitted their garden with many lights in the trees and oil-burning torches for perfectly lit night scenes. It creates a perfect, beautiful area to entertain in, says Jane, and the couple takes advantage of the space during the spring, summer, and fall. 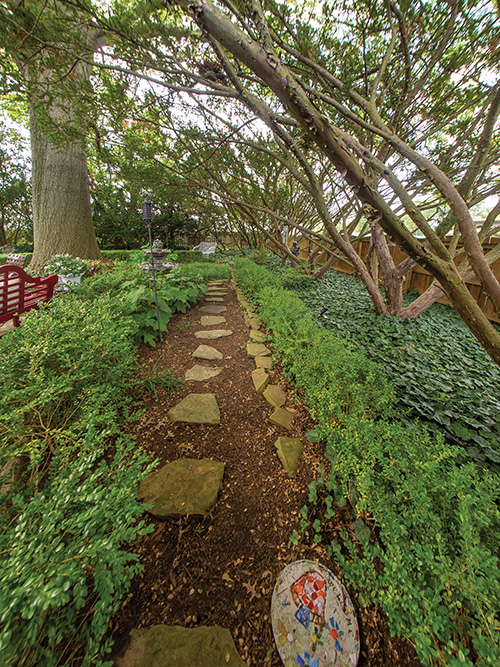 “I put round tables with long tablecloths out. We light all our torches. Everyone loves to come here when we’re entertaining,” she says.

Jane also has drawn on her background as an interior designer to further decorate and style her backyard area. The space is accented with fun pillows and various pieces an artist friend painted for her. Most pieces she has collected have stayed constant in the garden over the years, but if something catches her eye, it may find a new home in her backyard.

Jane often refers to the area as her prayer garden. Through the years, she has spent many hours planting and pulling weeds, or simply sitting and reflecting. The work in the garden is therapeutic for her — being outside always has been something she’s enjoyed and continues to do.

“It relaxes you after a hard day’s work,” she says. “It’s just a sweet garden.”