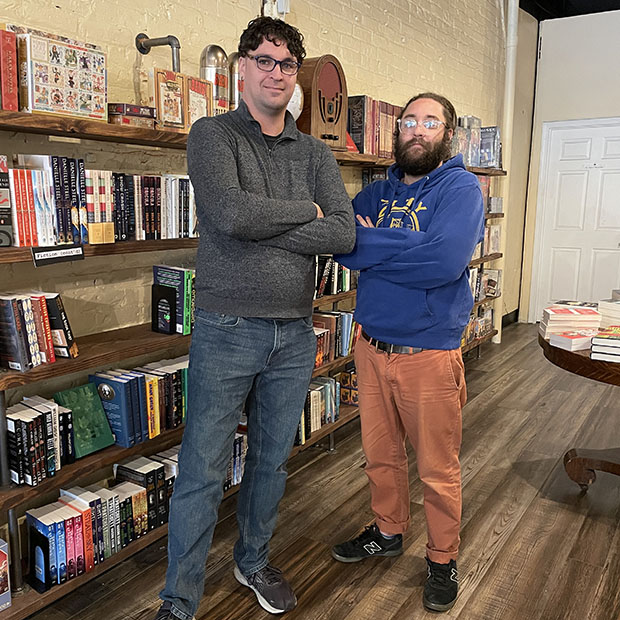 Built into the handmade rows of shelves filled with books, board games, and artwork inside Your Brother’s Bookstore is the vision of two passionate book lovers who just so happen to be brothers.

Sam and Adam Morris opened Your Brother’s Bookstore in Downtown Evansville on Oct. 1. The two Evansville natives moved backed to the River City after years living in different parts of the country — Adam working on Wall Street in New York City, and Sam spending time across the nation while serving in the Air Force.

While living away from their hometown, both found solace in small, independent bookstores.

“Through our adventures, bookstores are where we always ended up, and we would find these little community bookstores, these little places that could only work in one place with certain people. We knew that was what we wanted,” says Adam, who previously worked at Borders and Barnes & Noble bookstores. “We would go on vacation to go to bookstores.”

Finding themselves homesick, Sam and Adam, by complete coincidence, recently returned home to Evansville within a month of each other. They’ve since opened Your Brother’s Bookstore, hoping to capture the same experience they found in those small bookstores while traveling.

“When I was a kid and Adam (worked) at Borders, I used to go sit for his entire shift in the café and read,” says Sam. “That was a thing we did together a lot. Bookstores have always felt like home no matter where I go.”

The small, cozy shop at 504 Main St. offers new books, board games, gaming gear, and rare and signed books, as well as works from local authors and artists that are available for purchase. The bookstore is also host to book clubs, signings, board game nights, and poetry readings.

The Morris brothers say their store will specialize in science fiction, fantasy, and “nerd culture” selections, but they hope to expand their nonfiction and history sections.

“We’re literally in between cMoe and Lic’s, which Sam is calling ‘The Pilgrimage,’ because every parent has walked with their child from cMoe to Lic’s,” says Adam. 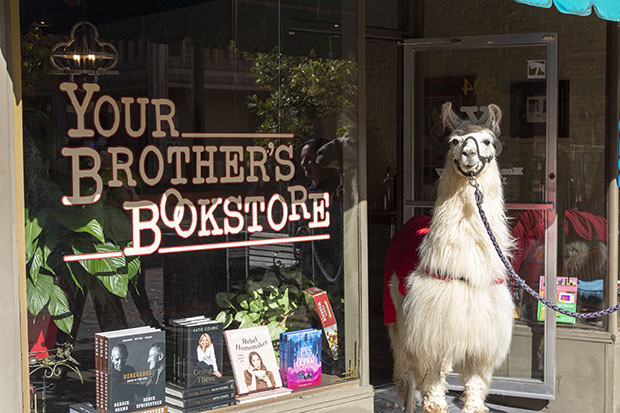 On Nov. 2, Your Brother’s Bookstore celebrated one month in business with a day full of events, including a reading from the “Llama Llama” book series, an appearance by Chronos the Llama from Lil’ Rexings’ Pony Express in eastern Posey County, coffee from Joe Brewski, pizza from Milanos, and a ribbon cutting with Mayor Lloyd Winnecke.

“We can’t have a dog and pony show within two feet of our store, per an ordinance from 1916, so we settled on having a llama come out,” says Adam.

The brothers are currently renovating the upstairs space they hope to make a workshop for Friday night painting classes, book clubs, figure drawing, and friendly board game battles. Sam and Adam also pride themselves on their handpicked collection of rare board games such as Gloomhaven and Mysterium, some of which are worth upward of $250.

“We are in the golden age of board games,” says Adam. “We are ahead of the game. We focus on only the best sellers and ones that are hard to find.”

Your Brother’s Bookstore is the latest business to open in an increasingly developed area of Downtown, with the store being on the same block of Main Street as the recently opened cold brew coffee shop Joe Brewski and arcade bar Arcademie.

“The community area of business owners, especially with Joe Brewski just coming in, us being here, and then Rafic (Hachem) being here for 20 years with Milanos, we have come together to build something here,” says Adam.