There is no other product made in the region that is steeped in legend and lore quite like bourbon. With its roots beginning in Kentucky and the surrounding area in the late 18th century, even the name itself is a mystery. Many claim the spirit is named after Bourbon County, Kentucky, although others believe the name comes from Bourbon Street in New Orleans, where the popular liquor was shipped via the Ohio River.

Elijah Craig, a Baptist minister from Virginia (later Kentucky), often is credited as being the “father of bourbon.” However, lack of evidence proves this story to be more tall tale than fact.

While its history and origin may be up for debate, there is no question of what makes bourbon a bourbon — after all, it is law. According to federal regulation passed in 1964, a bourbon is whiskey produced in the United States; made from a fermented grain mash that is at least 51 percent corn; distilled to no more than 160 proof; aged in new, charred oak containers at no more than 125 proof; and bottled at 80 proof or more.

Like most areas of Kentucky, Owensboro has its own long history with bourbon. According to Jacob Call, master distiller for O.Z. Tyler in Owensboro, there were 20 distilleries in Daviess County before Prohibition eventually shut them all down. Today, O.Z. Tyler is the lone bourbon distillery in the county, continuing the bourbon tradition that began on the site in 1885. 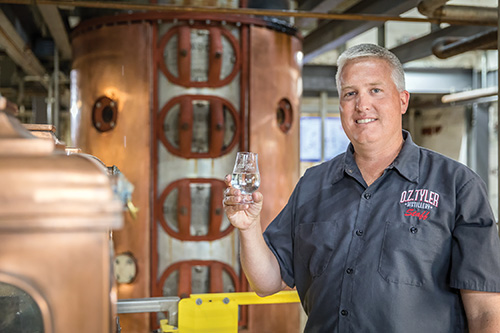 ▲ Masters of the Craft – O.Z. Tyler master distiller Jacob Call, above, says not much has changed in the industry since bourbon distilling began. O.Z. Tyler makes its Kentucky Bourbon Whiskey traditionally in its historic facility with modern equipment upgrades.

The distillery produces around 225 barrels of bourbon a day, using about 750,000 bushels of Kentucky corn annually (or two semi-trucks each day). The company’s first bourbon was produced in September 2016 and is the most popular spirit distilled.

“Bourbon is still king in the bluegrass,” says Call.

O.Z. Tyler is split into three parts. There is the private label business, a bulk business to ship tankers of bourbon all over the world, and new filled barrels of bourbon for other large distilleries as well as for O.Z. Tyler and its brands. In June, the distillery will be added to the Kentucky Bourbon Trail, joining the ranks of 10 other distilleries like Maker’s Mark, Wild Turkey, Four Roses, and Jim Beam. 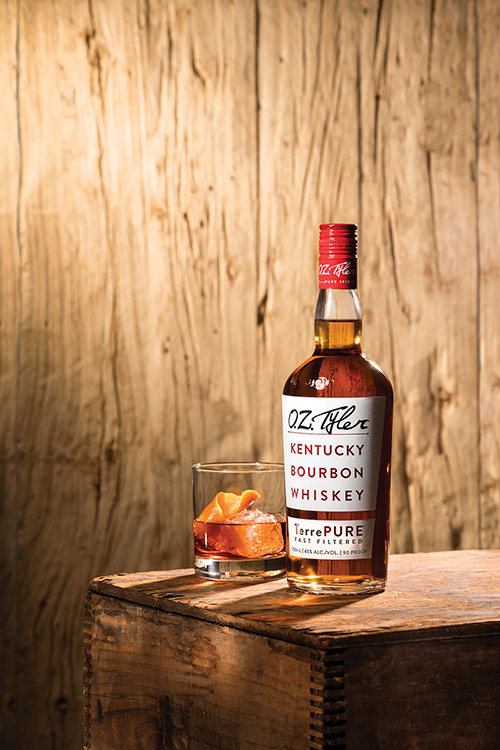 “They had 1.2 million visitors last year on the bourbon trail,” says Call. “Hopefully we’ll capture some of that this year and help with tourism in the area. I feel like everyone in Owensboro had kind of been sitting on the sidelines watching all this bourbon boom going on, and I feel like they’re really excited to be a part of that again by having their own distillery.”

Southern Indiana and the greater region lend themselves perfectly to the bourbon industry with the abundance of grain and high-quality water. Wild temperature swings throughout the seasons with hot summer days and cool summer nights allow the bourbon to move in and out of the wood, which filters the spirit and helps it age well.

“The weather is awesome, but I don’t think it could count for everything,” says Jesse Kuhlenschmidt of Dusty Barn distillery in Mount Vernon, Indiana. “There’s just a lot of history here and a lot of tradition.”

“I think it’s a direct spinoff of the microbrewery boom,” he says. “All the guys who wanted to be the next Sam Adams, they started making beer at home again. They started trying to actually make a business of it. It’s just a natural spinoff, and it goes hand in hand with the farm-to-table movement.”

With about 1,200 acres scattered throughout Posey and Vanderburgh counties, most of Dusty Barn’s grain comes from Point Township. Every grain used in the distillery’s spirits — from corn to rye and barley — comes from Dusty Barn’s land.

“We are probably one of the only dirt to bottle distillers,” says Charlie McPherson, managing distiller at Dusty Barn. “There are very few of them.” 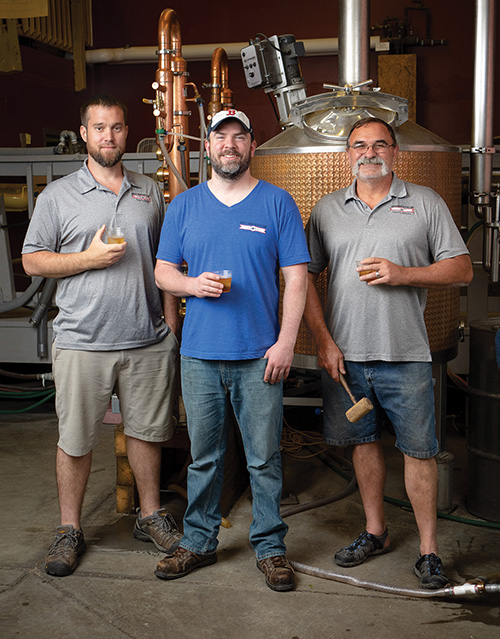 Before 2013, small craft distilleries like Dusty Barn couldn’t even exist in Indiana. Then on Jan. 1, 2013, the Indiana Artisan Distiller’s Permit was created, which allowed craft distillers in the state to sell directly to consumers and serve samples in tasting rooms.

After the law was passed, applicants for the state permit were required to have been a distillery for at least three years prior and had to file applications between July 1, 2013, and December 31, 2013. The only loophole was for businesses that had gotten a federal license before the state law went into effect. Dusty Barn made it in just under the wire. 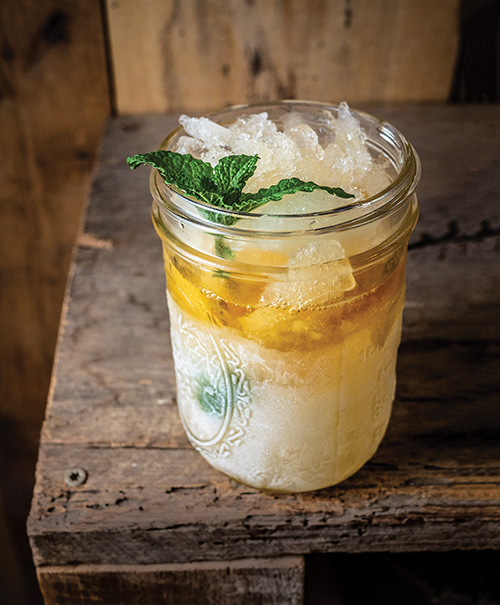 “I’m a nurse and my dad is a doctor, so we really drug our feet doing anything in terms of business,” says Kuhlenschmidt. “But we got in and got our federal license. That law went into effect Jan. 1, 2013. We got our license Dec. 23, 2012, so we barely got in and grandfathered into that law.”

Much of the bourbon boom in Indiana can be attributed to the creation of the Indiana Artisan Distiller’s Permit, which led to a rise in small craft distilleries throughout the state.

Fischer, an Evansville native, has made an entire career out of bourbon, running his bourbon-based blog and traveling around the world to educate connoisseurs on the spirit and train experts to become “whiskey sommeliers.”

“I just kept doing what I loved, and everything else followed,” he says. “This is the best time for bourbon, because there’s so many different kinds being made.”

At the same time as the Indiana Artisan Distiller’s Permit was taking effect, more evidence of the bourbon boom in Evansville was popping up through a gathering of local bourbon aficionados. The group would later come to be known as the Evansville Bourbon Society, beginning in February 2013, with a Facebook group of about 50 people.

“The goal is to educate people,” says Lisa Stinson, president of the group. “We try to bring in speakers from the distilleries or in the industry to come talk to us to help people further understand and learn new things about bourbon and the industry.” 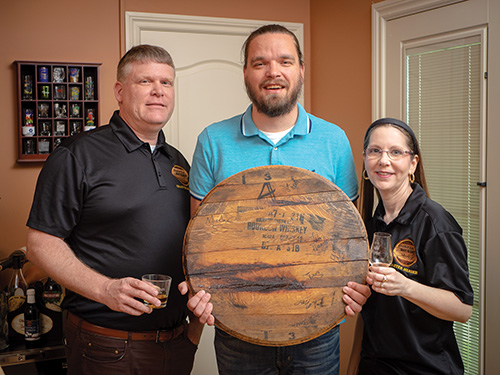 ▲ Join the Club – Evansville Bourbon Society president emeritus Michael Erwin, vice president Joshua Case, and president Lisa Stinson hold the head of a barrel from a private barrel purchase made by the club. The group has purchased six private barrels, with plans for the seventh and eighth barrels to come from Limestone Branch and a ninth barrel from Maker’s Mark.

Today, the Evansville Bourbon Society Facebook group has more than 600 members, with more than 100 actively participating at monthly meetings and paying dues. The group also plans annual trips to distilleries, hosts tastings, and purchases private barrels for members. As individual bourbon fans, they could not request to meet one-on-one with a master distiller. As a group of 100, however, they have been able to meet at least nine master distillers, including Jimmy Russell of Wild Turkey.

“There’s some strength in numbers there, and that’s part of the beauty of it,” says Michael Erwin, president emeritus of the Evansville Bourbon Society. “We’re also influencers, and I think that’s a big deal. Up until two years ago Barton [1792 Distillery] only produced at 94.7 proof. We went over there to do a single barrel and we begged them to do a cask strength. They said, ‘No, we don’t do that. We do 94.7.’ But you know what they did 6 months later? Full proof.”

As many stories circulate and pass down about the heritage of bourbon, there are as many reasons as to why the spirit has seen a rebirth in recent years.

“It tastes good. There’s no other reason I can think of,” says Kuhlenschmidt. “It’s the only truly American whiskey.”

For many in southern Indiana and the greater region, the ties to the local land, economy, and history are what keep bourbon at the forefront. 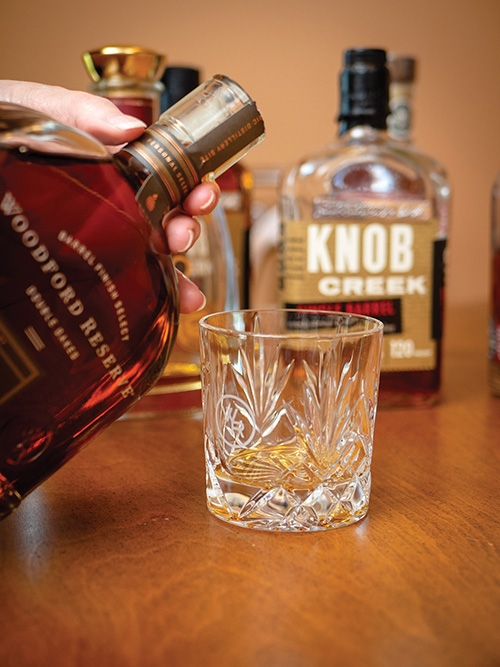 “Not a lot has really changed,” says Call. “If you were to go on a tour here, you would see a very historic facility with some very modern equipment upgrades.”

Part of these modern equipment upgrades include a new patented process the distillery calls the TerrePURE® technology, which works off of an ultrasonic filtration process. The technology allows the distillery to replicate in 12 hours what normally happens in a barrel over four years. However, at the heart of the company is its 163-year history with bourbon.

“What I tell people is we still make bourbon very traditionally here,” says Call. “Getting to put your stamp on something is pretty cool in the bourbon world. I kind of took it as a once-in-a-lifetime opportunity to get to take something and help bring it back to life.” 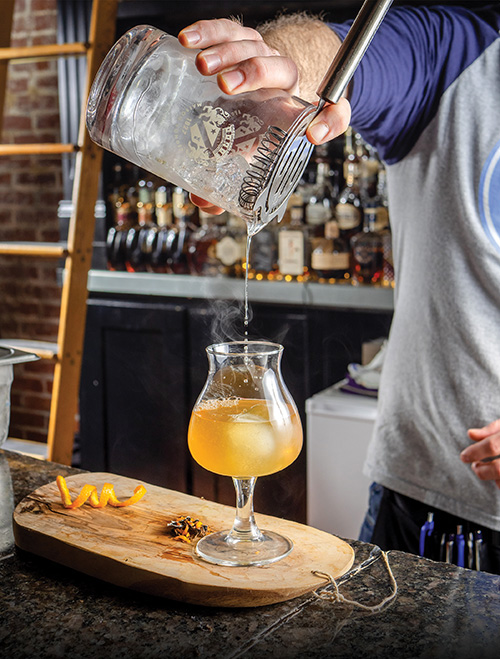 There is no denying bourbon is having its moment, and the trend has even permeated business in Evansville. In November 2016, chef Tim Mills opened Fidel’s Bourbon Bar and Cigar Lounge above Walton’s International Comfort Food, offering a prohibition-style atmosphere and cocktails from a selection of 196 whiskeys and bourbons.

“Evansville didn’t really have a spirit-focused bar,” says general manager Maxwell King. “I think Fidel’s was an important step in both the bar community and the cocktail industry.”

A major goal at Fidel’s is making bourbon approachable for the average drinker, so the next time you stop by the bourbon joint, try a flight or order an Evansville Business Members Only for a fruity twist on a bourbon cocktail.

Using a torch, light cigar trimmings and orange zest until smoke appears. Flip the glass on top of the trimmings to trap smoke inside. This will infuse the glass and drink with a smoky flavor. Shake the bourbon, elderflower liqueur, rosewater bitter, and sour mix over ice. Turn the glass over, add ice, and pour the drink on top. Garnish with an orange twist.