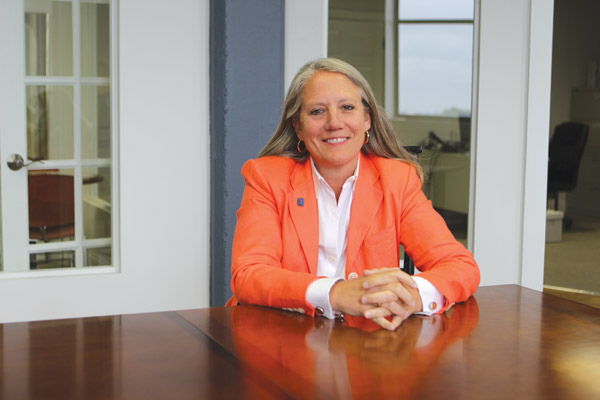 When Evansville native Stacy Stevens became the third owner of the well-known Main Street structure known as the Curtis Building, she planned to change its name. But when the time came, she says it just wasn’t right.

Stevens, the broker/owner of Landmark Realty & Development, purchased the 75,900-square-foot building, which was constructed in 1908 as a wholesale grocery warehouse for Parsons & Scoville Co. (commonly referred to as Pasco), in September 2012. The building received its name from its second owner, Ed Curtis, an entrepreneurial St. Louis-based businessman and owner of several Evansville properties, in 1995, becoming office spaces for businesses such as the American Association of Retired Persons (AARP), insurance companies, attorneys, and even an apartment.

In August, the Curtis Building celebrated its new sign in place of the old neon sign. The new sign, created by Custom Sign & Engineering, Inc. in Newburgh, Indiana, took around two months and is LED, which is much brighter, more energy efficient, and more visible. Stevens has improved the building’s landscaping, carpets, and painted the exterior.

The Curtis Building is currently looking for more tenants to occupy the office spaces, which also can house a fitness or athletic studio on the first floor. With more tenants Stevens says she will be able to make more renovations such as improving the parking lot and finish the carpeting.

“I’m proud to be Downtown,” says Stevens. “I love this old building. The people and tenants here love it, too. We are maintaining it and keeping it up and we hope everyone Downtown does the same thing.”

For more information about the Curtis Building, call 812-474-9814 or visit landmarkrealtyinc.com.