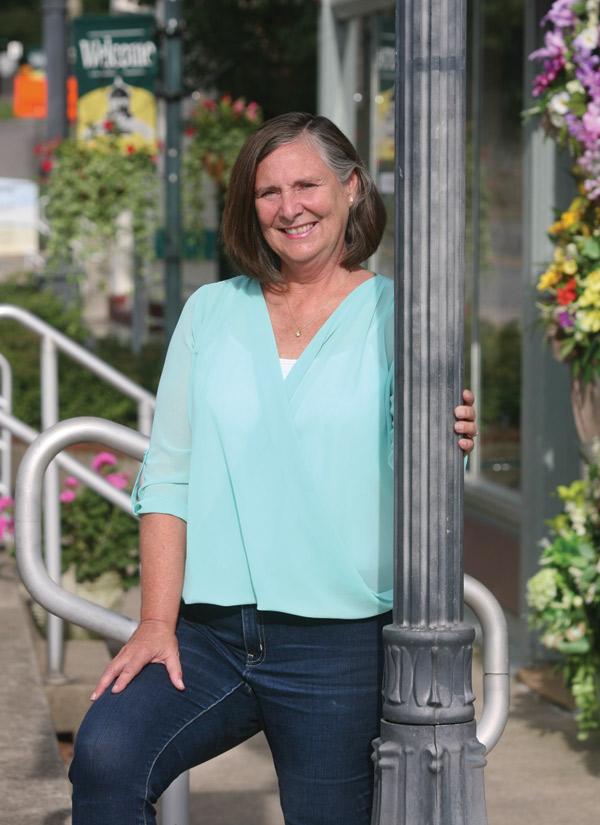 After 25 years serving Johnson & Johnson, Newburgh resident Carol Schaefer joined Historic Newburgh, Inc. as its executive director. The William H. Harrison High School and University of Tennessee, in Knoxville, Tennessee, alumna says the transition meant returning “where my heart has always been.” Schaefer, who has served as executive director for the past five years, studied interior design with a focus in historic preservation. Today, Historic Newburgh has around 300 people who volunteer at its various events.

How does Historic Newburgh, Inc. work to impact the locally owned shops and restaurants in Newburgh?

We are dedicated to historic preservation, but we also are dedicated to economic revitalization and sustainability of downtown businesses. We do that a number of different ways. One of the ways is through the events. They bring people to town. They may not go in the shops that day, but they see that we’ve got wonderful shops, cool restaurants, a Rivertown Trail that can be a destination; we have a museum that is a wonderful snapshot into the development of the whole U.S., but it’s all about Newburgh.

When you joined Historic Newburgh in 2010, what did you hope to accomplish in the community?
My philosophy is we are here to help make things happen. Historic Newburgh helps to be a catalyst. That’s how we ended up with a farmer’s market. (The farmer’s market is held every Saturday until Sept. 26, and every Wednesday until Oct. 28.) Someone simply came by the office — Jim Arnold — and said ‘What do you think about us having a farmer’s market?’ And I said, ‘We’ll do everything we can to promote it.’ That’s how we ended up with theater. Brenda Bender (producer) took it and ran with it. (“Murder’s in the Heir,” an audience interactive murder mystery comedy, is scheduled for Oct. 2-4.) Movie night is coming up and it’s because someone stood up at our annual meeting and said, ‘I think we should do movies out on the lawn.’ (There are three movie nights scheduled — “The Lego Movie” on Aug. 15, “Paddington” on Sept. 19, and “Hocus Pocus” on Oct. 24.)

What event are you most proud of during your time with Historic Newburgh, Inc.?
The Historic Newburgh Farmer’s Market is in its fifth year. This year has taken us to an entirely different level. We are at the point where we have expanded the number of vendors and we have events within the event. We’ve had an environmental day, we’ve had our fireworks rally, and recently had a children’s day with more than 20 nonprofit and profit organizations.

Describe Newburgh as a community.
People who live in Newburgh love to share their community with others. The town of Newburgh is only 3,000 people, then there’s the 47630 Newburgh that is 40,000 people. I think people see Newburgh as a backdrop to their events and activities. Any spring day you can see people doing photographs — senior pictures, weddings, and anniversaries — or runs. There are so many runs and activities throughout the year. There is always something going on.