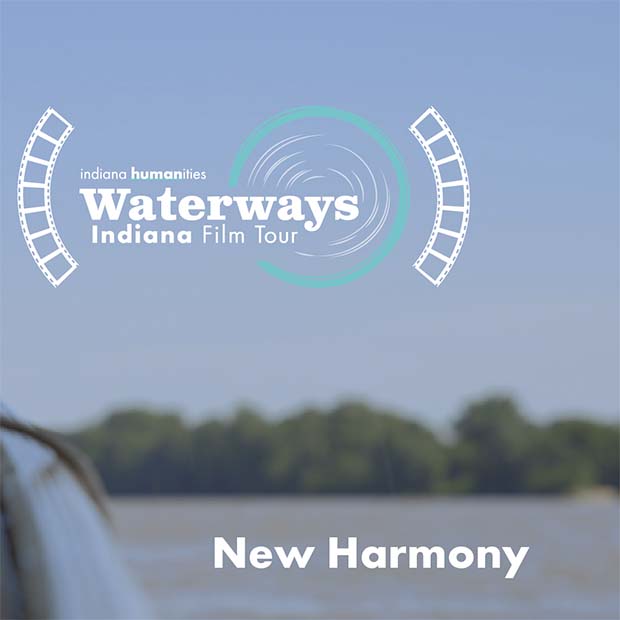 Indiana’s strength and vitality emanate from, among several places, our many waterways. Hoosiers have diverse relationships with water, and Indiana Humanities’ Waterways Film Tour is highlighting stories of access and conservation, as well as the unique cultures that spring up around Indiana’s waterways.

The Waterways Film Tour is a nine-city tour featuring six short documentaries by a variety of Hoosier filmmakers, and will be making a stop in Historic New Harmony, Indiana, on March 31.

Each of the documentaries takes a look at one aspect of Indiana’s waterways, such as the efforts to protect the hellbender salamander, a Girl Scout troop’s efforts to create a nature preserve, or the consequences for communities located on the Camulet River System. The film series includes stories from the Blue, White, Wabash, Ohio, and Calumet rivers and Big Pine Creek and displays the diversity of Indiana environments and Hoosiers’ interactions with water sources.

“I think there’s so much to be learned from the stories that are being told about our waterways and, again, how we’re impacting the environment and those bodies of water, and then the impact they have on us on our families, our community, and our ways of life,” she says.

The film series is part of the larger Indiana Humanities initiative “Unearthed,” which encourages Hoosiers to discover and discuss their relationships with the natural world.

“This is a really cool opportunity to not only give local filmmakers the opportunity to get funds to create the documentaries and films, but to also expose Hoosiers to the talent that is in the state and the stories that people have to share,” says Rodriguez.

Filmmakers were asked to submit a film proposal about Hoosiers and their interactions with water, which were reviewed by an outside committee including filmmakers, curators, and film and media studies educators and scholars.

One of these films brings the focus down to Southern Indiana, where two men are working to keep the tradition of hoopnet fishing from being lost to time. The film, titled “The Net Makers,” was produced by Indiana filmmaker and Ball State University graduate Hannah Lindgren.

It examines the craft of commercial fishermen Larry Haycraft and Danny Cain, who catch fish using traditional hoopnets in the White and Wabash rivers in nearby Pike and Posey counties. Netmaking is a tedious and time-consuming technique, as the netmaker must spend hours hand-tying thousands of small knots to create the intricate hoopnets.

The film explains the precarious state of this tradition, as netmaking has been passed down from generation to generation since the Great Depression. With few left who have been taught this craft, the art of netmaking is in danger of being lost.

“I think it lends itself to the greater lens of the humanities: Why should we care about the past? In a lot of ways, it’s a way for us to look at our future,” Rodriguez says. “I think it’s really important for these stories to be told and these legacies and crafts to be preserved because it gives us insight into the past and to the ways of life that our waterways have supported.”

With films like “The Net Makers” and art shows around the state taking an interest in Haycraft’s and Cain’s craft, there is hope that future generations will take an interest and save the art of traditional net making from becoming extinct.

“The Net Makers” and the other five Waterways films will be shown at New Harmony’s Atheneum at 401 Arthur St. on Thursday, March 31. The two fishermen will be present with their nets and demonstrate knot-making. There will be a Q&A portion with the filmmaker after the documentary is shown. Doors will open at 5:30pm, and admission is free. Register here: https://www.eventbrite.com/e/waterways-film-tour-historic-new-harmony-atheneum-tickets-247355235167