As your out-of-town guests are arriving for a long weekend, they’re asking for a taste of Evansville — literally. You want to offer them top-notch customer service, to-die-for dishes, and a flair of history unique to our area. So what’ll it be? Here’s a short list of can’t- miss restaurants while you’re visiting the area or living here already and need a reminder of what this city is all about.

Shing-Lee Chinese Restaurant Owner Foo Fhung Jung opened the family-owned business at its present location in 1971. Jung says its longevity is a result of cooking to the changing preferences of his customers. “People’s taste buds change and we cook whatever the people prefer. We cook to the taste of the people. They tell us what to cook,” says Jung. The restaurant serves Cantonese cuisine, which comes from the Guangdong province, the most populous province in China. He says their consistency makes them a can’t-miss dining experience. Jung cites Shing-Lee’s sesame chicken as a top seller. 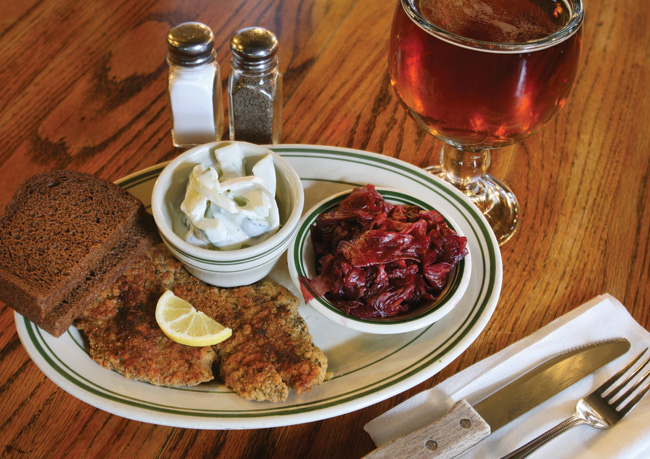 ▲ Wiener Schnitzel from the Gerst Haus. Photo by Jerry Butts

Evansville’s German roots run deep in its culture and its food. While the Gerst Haus is famous for its German cuisine, its history and uniqueness make it one not to miss. The original owners of the building were German and it was known as the Heldt & Voelker hardware store. Much of the 1890 building has stayed the same — the ceiling, floors, ladder along the east wall, and stage area are original. The same owners of Evansville’s Gerst Haus, which opened in 1999, also own the Gerst Haus in Nashville. The Nashville’s restaurant original owner, William Gerst, owned the 1910 Kentucky Derby winner Donau. “It is a can’t-miss restaurant because of the charm, history, and uniqueness,” says Manager Cindy Reitz. “Of course, for its great food and an award-winning beer selection, too. Hardly a week goes by that someone doesn’t tell us ‘I used to come in here with my grandfather when it was a hardware store.’” 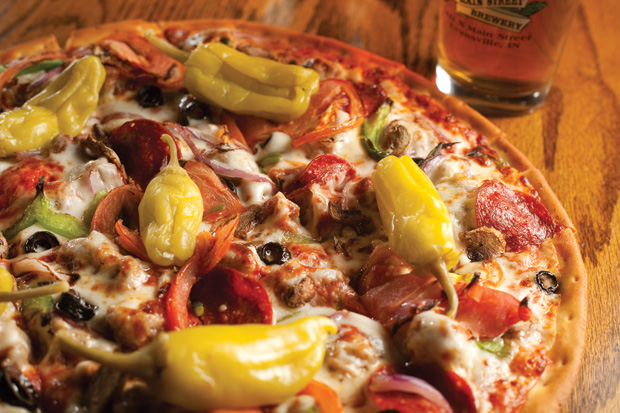 Turoni’s is Evansville and Evansville is Turoni’s — two places synonymous with each other. The restaurant first opened in 1963 before expanding to two more locations (Turoni’s Forget-Me-Not Inn in the early 1990s and Turoni’s Newburgh in 2010). The restaurant’s signature thin-crust only style pizza, which has been voted best pizza in the state in past polls, makes Turoni’s a must-eat destination. What goes good with pizza? Beer! Turoni’s Main Street location is Evansville’s oldest microbrewery in continuous operation since 1996. Turoni’s brews can be purchased at each of the three restaurants, but it does not have any bottling or packaging services. Customers can buy a half-gallon glass jug to take home at the bar. “We want to make a good product and we want people to be satisfied, and if they aren’t, we find a way to make sure they are,” says Manager Jeff Seeber. 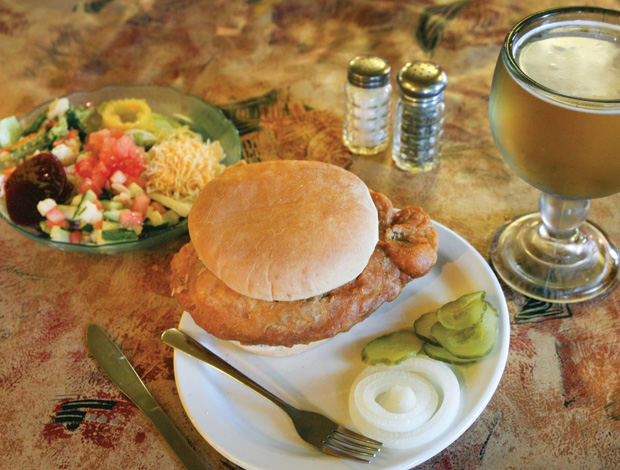 ▲ Brain Sandwich from the Hilltop Inn. Photo by Jerry Butts

Don Synder grew up around Lynnville, Indiana, and his wife Lanette Synder grew up on the West Side of Evansville. The two were gone from the area for nearly 30 years until the Hilltop Inn called them back. “It was a long time dream,” says Don, who purchased the Hilltop Inn in 1999. “We were in the chain restaurant business for 20 years and had opportunities to buy in, but in the back of my mind I thought that I had been in contact with the owners of the Hilltop and told them if one day they ever wanted to go fishing to keep me in mind.” Best known for its brain sandwiches, Don says they sell about seven to eight cases of pork brains a week in the tavern-style restaurant. Both the fried fish and chicken also are big sellers. While the majority of its business is locals, he says he serves many travelers who “are looking for different and unique experiences that they can’t get anywhere. There’s only one Hilltop Inn.”

▲ Mediterranean Salad and Arabian Bread from House of Como. Photo by Jerry Butts

House of Como is often referred as one of Evansville’s best-kept secrets and Owner Martha Hage sees this every day in the restaurant started in 1969 by her late husband George. She says that when people come in for the first time to the Evansville staple that serves Lebanese, Arabic, and Italian unique foods, they often don’t know what to order. “They’ll order from the menu, try it, and they don’t want to change to anything else. They stick to the item. We’ve encouraged people to eat lamb that have never eaten it before, or they’ve had it somewhere else, but haven’t tried ours,” says Hage. Known for its year-round Christmas décor, Hage says House of Como is a can’t-miss because customers are treated like family. “Our customers are like relatives,” she says. 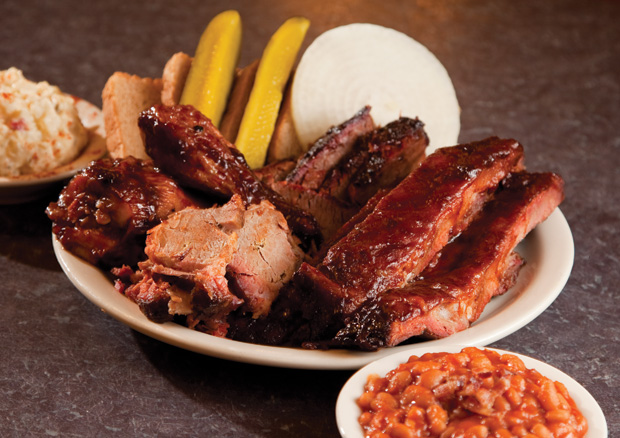 When they say family-owned, they mean family-owned. Nicholas C. Wolf established Wolf’s Bar-B-Q in 1925, originally as a wholesale meat distributor specializing in barbeque. Wolf’s sons, Nicholas Wolf II and Charles Wolf rebuilt the operation after a fire destroyed the entire facility in 1946, and in 1952, the two sons operated the first Wolf’s Bar-B-Q Restaurant. When Charles died tragically in a boating accident, his brother became the sole owner and operator and made the decision to expand the restaurant. His children, Terry and Kim Wolf, took over as co-owners 25 years ago and attribute Wolf’s as a can’t-miss to their choice to use the highest-quality ingredients regardless of the cost. “There are different kinds of barbecues all over the country,” says Terry. “I like to think that we have one of the best barbecues that is at the top of the list. I don’t think we would have been able to sustain and stay in business as long as we have if we didn’t serve a quality product.” Terry says it’s Wolf’s signature barbecue sauce that sets the restaurant apart from others. 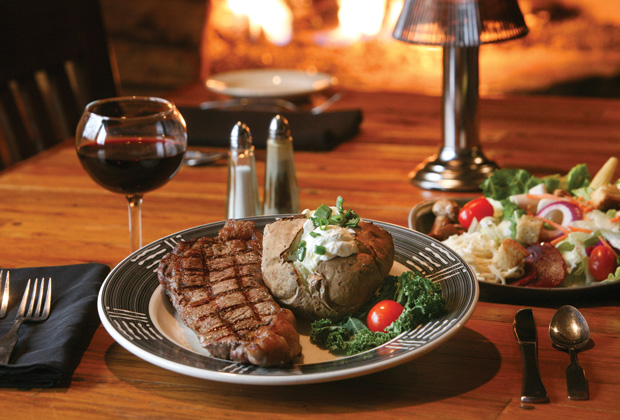 Cork ’n Cleaver began as a chain in the early 1970s before becoming locally owned in 2001, and Manager Steve Bennett says the city of Evansville has embraced it as their own ever since. “It is an Evansville classic,” says Bennett, who is originally a St. Louis native who studied at the University of Southern Indiana and decided to stay. “It is rustic with four fireplaces, booths, and comfy lounge areas. We do a lot of celebrations — if you have an anniversary, or if you want to impress a date, you come here. Once you get in here, you relax and don’t want to leave.” In addition to the relaxing atmosphere, Bennett credits Cork ’n Cleaver as a can’t-miss stop because of its quality ingredients, hand-cut steaks, and fresh seafood.