Mike Reeder can remember the moment he fell in love with food. He was at his childhood friend Denny’s house watching him make an egg sandwich. The sandwich itself was nothing fancy — fried egg, white bread, a little mayo — but he was hooked.

“It was the first time I had ever had olive oil. He cracks this egg, mixes it up, throws it in there, and sizzles it. It was beautiful,” says Mike. “That’s how I got started loving food, because of Denny and his fried egg sandwich.”

Today Mike is fulfilling his childhood fantasy with his restaurant Commander’s Grill in Boonville, Indiana, located at 118 W. Locust St. on the square. He and his wife Julie opened the restaurant in March 2016 after spending a year at the Boonville Country Club to test the waters in the local restaurant industry.

While he says he’s studied food since he was 6 years old, he never had the opportunity to get involved in the food business until deciding to open Commander’s Grill. He previously owned a home improvement warehouse in Evansville before getting into the real estate industry, but knew restaurants were where he wanted to be.

The namesake of Commander’s Grill is Julie’s great uncle, Commander Ralph Downs Weyerbacher, whose image hangs on the wall behind the hostess stand. The Boonville native was appointed to the Naval Academy in Annapolis, Maryland, in 1905, and would continue on to directly plan and supervise the construction of the first rigid airship built in the United States, the Zeppelin Rigid No.1.

In October 1923, Commander Weyerbacher set off on the first official trek of the ZR-1, carrying a crew of 34 men and making sure to fly over his hometown of Boonville where the town was waiting throughout the square and on rooftops to catch a glimpse of the ship as it passed over.
The restaurant as a whole is a collection of Mike’s and Julie’s histories and memories, from family stories to long-loved recipes. Of all the family favorites offered at Commander’s Grill, Mike and Julie say the house salad is what they are best known for. A mix of romaine lettuce; red onion; tomatoes; pepperoni; pepperoncini; house Italian dressing; and Provel, Romano, and Parmesan cheeses, the salad is a recipe the couple has made with friends for years.

“We’ve been making that salad forever and ever and ever,” says Mike. “It’s addictive and people love it.”

“When we opened here, we said why don’t we bring the salad here and see if people crave it as much as we did,” says Julie.

While the Provel gives the salad a distinct St. Louis flavor, the house-made Italian dressing is what truly makes the dish special and a popular choice among diners.

“If there was ever a recipe that cannot get out of this place, it’s that one,” says Mike. 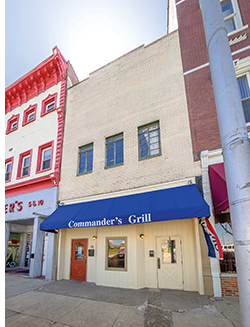 Aside from the salad, Commander’s Grill also offers up classic favorites like the commander burger, breaded pork tenderloin, steak sandwich, and fried chicken. In the evening, customers can get a taste of different dishes added to the menu including pork tenderloin medallions, 16 oz. rib eyes, and lasagna made from scratch. Mike says every item on the menu is well liked by customers, and he couldn’t take a dish off without it being missed.

“It’s like picking your favorite child. You can’t do it,” says Mike. “There’s not a thing on that menu I would take off because it’s not good.”

Through Commander’s Grill, Mike and Julie have brought something to Boonville the town didn’t have before, and it shows in the community’s enthusiasm and support for the restaurant. Already, they have regulars who come in every day, if not twice a day on occasion.

“The people of Boonville are awesome and really receptive, and they’ve supported us from the beginning,” says Mike.

Even the surrounding area outside of Boonville has shown its excitement for the home-style restaurant. Mike says 60 to 70 percent of dinner customers come from outside of Boonville, with diners even traveling from other towns like Jasper, Indiana, to get a taste of Commander’s Grill.

“It’s a gathering place for people,” says Mike. “We feel like we have a duty to the community to be good stewards of our business and give everyone a great product.”