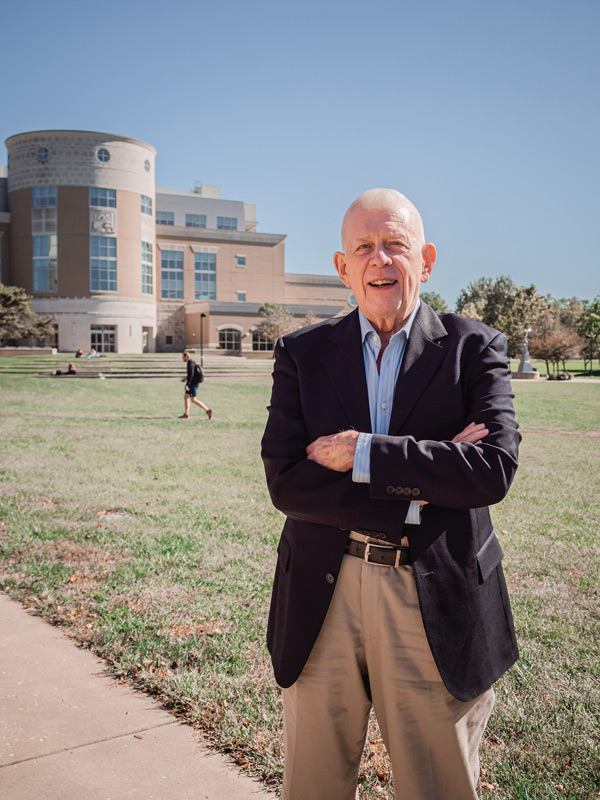 In 1939, before the University of Southern Indiana existed, 7-year-old Philip Hagemann took his first piano lessons in his native Mount Vernon, Indiana. More than 80 years later, the renowned composer and conductor visited USI with Murray Rosenthal, his longtime friend and co-owner of the Broadway production organization Hagemann Rosenthal Associates, to reveal a major local investment.

Formally debuted Oct. 19 prior to a concert of Hagemann’s works at USI, the $2 million award established the Philip H. Hagemann Music Program Fund, which will remain open for future community donations. While USI’s Performing Arts department within the College of Liberal Arts currently offers a music minor, Hagemann hopes the gift will aid the establishment of a full music degree.

“I think everybody should have the opportunity to experience music. If I can do something to increase those opportunities, I’m happy to do it,” says Hagemann.

The fund will spur the development of music courses, classroom spaces, scholarships, and more. USI is also naming its art department after Hagemann; archiving all of his published compositions; and continuing sponsorship of the Hagemann Award for Musical Performance, an annual high school competition in New Harmony, Indiana.

Hagemann received an honorary doctorate of humanities from USI in 2016, but when it was founded as Indiana State University-Evansville in 1965, Hagemann was 32 years old and had long since left Evansville.

Attending Mount Vernon High School, Hagemann drove into Evansville for further piano lessons at the University of Evansville. He also played the alto saxophone in his high school’s marching band, an experience that led him to study music at Northwestern University in Evanston, Illinois. He was drafted into the U.S. Army toward the end of World War II; his first permanent assignment after completing basic training was in Salzburg, Austria, as part of the band training unit.

After the war, Hagemann attended Columbia University Teachers College in New York City for his master’s degree. Teaching led Hagemann to Rockland County, New York, where he taught high school choral music and conducted the local adult community chorus for the next 50 years.

Retiring from the position in 2020, Hagemann’s work won him honors from the Council of Arts in Rockland and acted as the spark for a lifetime of composing.

“It was a fabulous experience,” he says. “I conducted many choral masterpieces while I was there. And I grew as a composer from the experience of conducting that chorus and those works.”

His first composition was a humorous piece based on Ogden Nash’s poem, “Christopher Columbus.” Hagemann has since published more than 75 choral compositions, 10 one-act operas, and two full-length operas, including “The King Who Saved Himself from Being Saved.”

At 88 years old, Hagemann still resides in Manhattan and prefers listening to symphonic music over contemporary rock, though he can’t choose a favorite piece of music or composer — an act he likens to “asking a parent to choose a favorite child” — and visits the Tri-State about once a year.

Hagemann is working on a new short opera based off of a New York Times op-ed story, “Date with a Neanderthal” by Teddy Wayne, and, with gestures like his gift to USI, creating opportunities for young musicians.

“I don’t have children and I was able to make a considerable donation to the school, and it’s a mutually agreeable thing,” he says. “I think it’s already showing some signs of progress.”