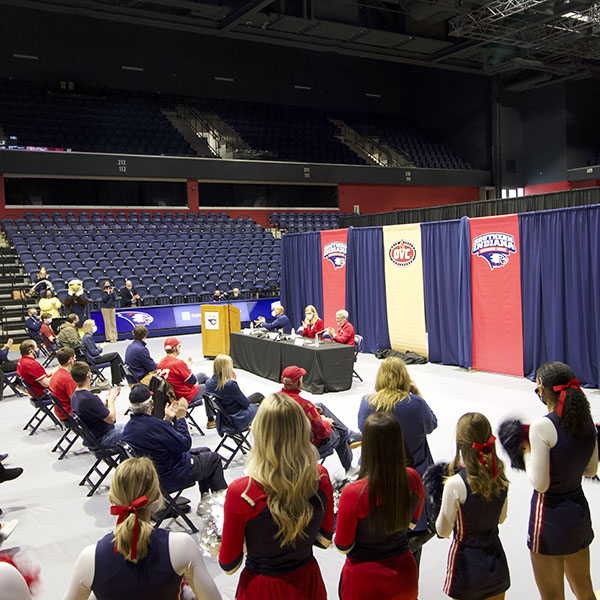 Downtown Evansville has once again been transformed for one of the region’s most anticipated tournaments. The Main Street archway is adorned with basketballs by Wilde Horticulture and visiting teams’ banners line the walkway for the 2022 Ohio Valley Conference Basketball Championships. This year marks a transition of sorts, as Murray State and Belmont universities depart for the Missouri Valley Conference after this season, and Evansville’s own University of Southern Indiana joins the OVC.

The tournament kicked off Wednesday with 16 men’s and women’ basketball teams from 10 different schools competing in the NCAA event through March 5. In women’s matches on opening day, No. 8 Tennessee State topped No. 5 Eastern Illinois 72-61 and will meet No. 4 Austin Peay in the women’s quarterfinals at 1 p.m. today. No. 7 Southern Illinois University-Edwardsville bounced past No. 6 University of Tennessee-Martin 86-84 and will face No. 3 Murray State at 3:30 p.m. today.

In men’s first-round games Wednesday, No. 5 Tennessee State overcame No. 8 Southern Illinois University-Carbondale 77-62 and will play No. 4 Southeast Missouri at 6:30 p.m. today. No. 7 Tennessee Tech downed No. 6 Austin Peay 78-51 and will face No. 3 Morehead State at 9 p.m. today.

Winners of today’s women’s games will face No. 1 Belmont at 1 p.m. and No. 2 Tennessee Tech at 3:30 p.m. in the semifinals Friday, while men’s quarterfinals winners will advance to semi games against No. 1 Murray State at 7 p.m. and No. 2 Belmont at 9:30 p.m. Friday, respectively. The women’s championship game is slated for 2 p.m. Saturday; the men’s title game will be played at 7:30 p.m.

Local celebrations along Main Street will take place through the weekend. Hotels are expected to be full, and Murray State’s alumni party will be headquartered at Tiki on Main (formerly Backstage Bar and Grill) for a unique block party that will shut down the section of Main Street around the Ford Center for the duration of the tournament.

Murray State’s Racer Band and Dunker and the Spirit Squad will be on sight to help the No. 1 seed and tournament favorite go out of the OVC with a bang. The team’s head coach Matt McMahon — who led the team to the OVC’s first 18-0 conference-play record this year — was named the OVC coach of the year. Murray snagged both the women’s and men’s player of the year as well, with forwards KJ Williams and Katelyn Young earning honors.

While Murray State won’t be a member of the OVC next year, it won’t be a stranger to Evansville. The Racers, along with the Belmont Bruins, are leaving the OVC for the Missouri Valley Conference and will subsequently play the University of Evansville in conference games.

With this OVC gap, the University of Southern Indiana has made the move to Division I sports. Following the USI Board of Trustees’ unanimous decision on Feb. 7 to move the school’s athletics to Division I, the university announced on Feb. 9 that it had accepted an invitation — excluding men’s soccer and swimming and diving — to join the OVC.

“We believe (the OVC) is the right spot for us,” says USI Athletic Director Jon Mark Hall. “This launch into DI will give us brand exposure all across the country.”

OVC representatives have said that the tournament is still expected to continue at the Ford Center each year.