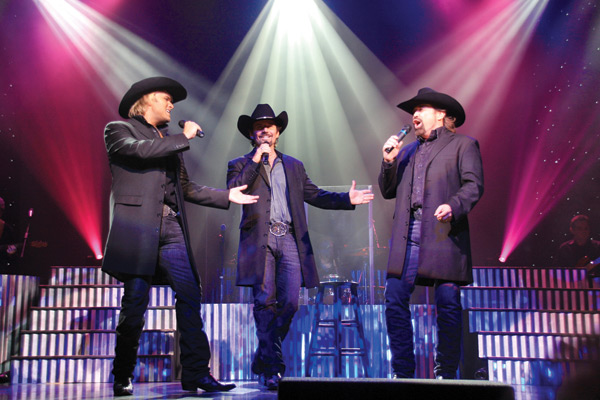 Becoming the highest-ranking vocal group in the history of America’s Got Talent in 2009 was just the beginning for The Texas Tenors. Marcus Collins, John Hagen, and JC Fisher have entertained audiences at more than 500 concerts around the globe with their country, gospel, classical, and Broadway styles. Although The Texas Tenors did not win the grand prize — they finished fourth — the crooning cowboys made an impression.

Each member of the group is uniquely talented, but they come together as a trio known for its humor, country charm, and beautiful vocals. The Texas Tenors often partner with large orchestras, including The Houston Symphony, the Cleveland Pops, The Phoenix Symphony, and the Prague Philharmonic — and for 60 shows a year, the musicians make The Starlite Theatre in Branson, Mo., their home.

The Texas Tenors bring their Deep in the Heart of Christmas Live show to Jasper, Ind., on Dec. 8, when the Jasper Community Arts Commission hosts the trio in its Performers Series at the Jasper Arts Center. Two days later, the trio will release its second album, “You Should Dream.” The album’s title track was written by a Fayetteville, Ga., school teacher Dana Lamb, who told her hometown newspaper, The Citizen: “They (The Texas Tenors) have a soft spot for educators because all of their parents were teachers. They thought the song was so inspirational because teachers encourage their students to dream; that is what teachers do,” she says.