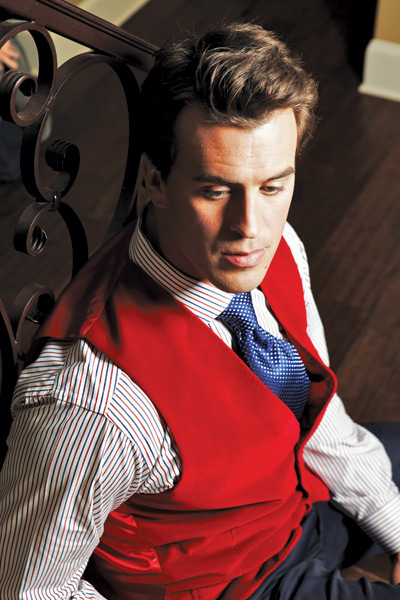 From catching passes from football legend Peyton Manning to entertaining thousands alongside Grammy-nominated Jim Brickman, Ben Utecht has achieved both of his childhood dreams in the last decade.

Often referred to as a real-life “Glee” character, the 32-year-old Rochester, Minn., native has excelled both on the football field and in the arts. On Dec. 15, Utecht will perform as part of the Owensboro Symphony Orchestra’s Holiday Pops-Masterworks Series from 3 p.m. to 4:30 p.m. at RiverPark Center.

Utecht played tight end football for the Division 1 University of Minnesota Gophers from 2000 to 2003. He become acquainted with Tony Dungy, former head coach for the Indianapolis Colts and an alumnus of the University of Minnesota. “He was a Gopher just like I was,” Utecht says of Dungy, who played there from 1973 to 1976. Utecht had the honor of introducing Dungy as a speaker at the Athletes in Action banquet just a couple of months before the NFL draft. Utecht laughs at the memory, as he had lightheartedly joked to the crowd that he expected Dungy to pick him up in the draft. “Us alumni have to stick together,” Utecht recalls having said to Dungy.

Despite being one of the top tight ends in the 2003 draft, Utecht’s chances were reduced after an injury his senior year. But when the free agent market opened up, he got a call from Dungy and was off to Indiana to don the Indianapolis Colts blue.

Utecht was a member of the 2007 team to take the Super Bowl XLI title. He says life in the NFL was somewhat normal, as he continued to play the sport he had been familiar with since the third grade. “On the other hand, you have to pinch yourself realizing how blessed you are to play with such great talents,” he says. In 2008, Utecht signed an offer with the Cincinnati Bengals. This was an exciting transition for him and his wife, Karyn, who were married in 2006. But Utecht unfortunately suffered his fifth concussion in training camp. The injury was so serious he was forced to end his football career. Yet Utecht knew there were brighter roads ahead.

As a pastor’s son, Utecht says he grew up in a diverse home with a strong emphasis on religion, athletics, and the arts. His mother is a vocalist who would sing at church. Utecht excelled in football, hockey, and track as a three-sport athlete, but he participated in even more choirs than sports teams. That made for a trying high school experience, he says. “It’s difficult for kids trying to bridge the gap between athletics and the arts,” Utecht says.

“The rushes are so incredibly similar and different, but collectively they have one thing in common, and that is that I love to do them both,” Utecht says. “As a man, one thing I truly long for is to have a purpose and to be relevant in this life."

He offers this advice to students struggling to balance their interests: “Never compromise your heart. Sink your heels into what you truly love and run after what you believe in. You will be successful in those areas and you will gain respect from others.”

After releasing his first self-titled album in 2006 under Stylos Records, Utecht had many opportunities to advance his singing career even while he was continuing to play professional football. After moving to Nashville in 2009, he landed a spot on tour with songwriter and pianist Jim Brickman in 2011. Utecht says the 32-city tour allowed him to mature on stage. His new album, which includes personal songs revealing the “true Ben,” is expected to be completed by the end of this year. In the future, Utecht hopes to apply his passion for music to his advocacy for the American Brain Foundation. The brain injuries he suffered from his concussions drive Utecht to share his story and to make more people aware of traumatic brain injuries.

According to Nicholas Palmer, music director of the Owensboro Symphony, the Holiday Pops is one of the symphony’s most popular concerts of the year and will include traditional and popular holiday music as well as a sing-along.

“Ben has a lot of charisma and is an excellent singer, so he was the natural choice to perform in Owensboro,” Palmer says. He believes Utecht, who lives in Minneapolis, Minn., with his wife and three daughters, will have a rapport with the audience. “I am hoping he will bring his Super Bowl ring as well,” he says.