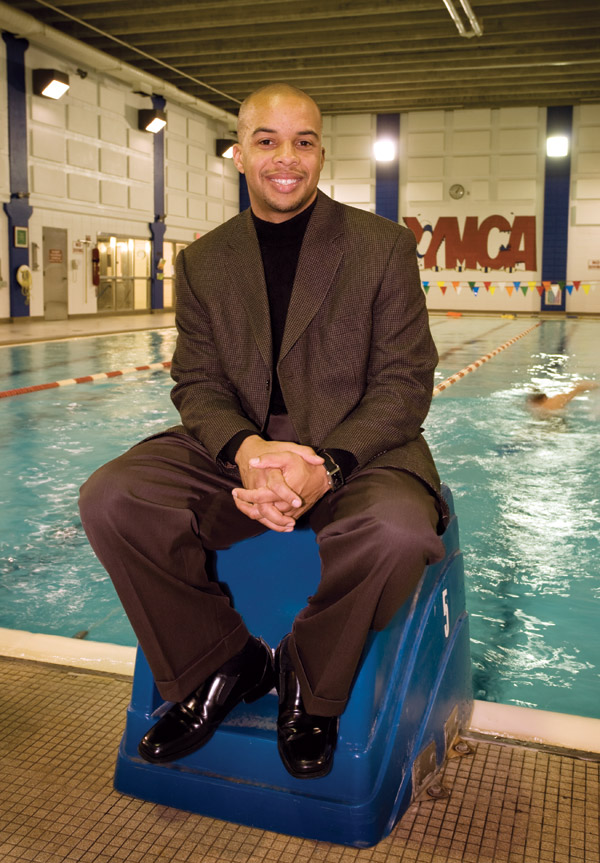 Derrick Stewart has come a long way from his first job at the YMCA of Southwestern Indiana: teaching computer lessons to kids at age 17. Now 31, Stewart is one of the youngest CEOs — and the first African-American one — ever to lead the local organization in its 150-year history. The Evansville native, who attended Evansville Christian School and Bosse High School, graduated from Indiana University in 1999 with a business/finance degree. After a stint at a Chicago consulting firm, he returned home and began to ascend the ranks at the YMCA, beginning as a community outreach program director. Most recently, he worked as chief operating officer; he was promoted to CEO to succeed the retiring Ron Edele. Among Stewart’s main goals for the organization: continuing the YMCA’s Christian mission and expanding its existing programs that build stronger children, families, and communities.

As a child, what did you want to be when you grew up? What was your first paid job?
As a kid, I loved to watch the television show Matlock, so of course, I always dreamed of being an attorney. In high school, I did an internship in the prosecutor’s office and decided that attorneys have to read way too much. My first job was at Little Caesars pizza. It only took being assigned to take pizzas out of the oven and cut them on a busy Friday night to realize that I definitely needed to go to college.

Tell us a little about your family.
My wife, Chotsani, and I have been married for seven and a half years, and interestingly, we met at the YMCA. We have a beautiful 4-year-old daughter named Cheyenne. More than anything, we enjoy spending time together as a family and keeping life as simple as possible.

You started your career at a Chicago consulting firm and returned home to work for the YMCA. How do the corporate and nonprofit worlds overlap?
The two worlds are more similar than they are different. Success is just measured in different ways. In corporate America, success is often measured in terms of profit; in the nonprofit sector, success is measured in terms of impact. But the operating principles required to achieve success in both sectors are largely the same. The biggest lesson I learned is that success — in both types of organizations — begins with a clear and compelling mission.

What is the first major change you hope to accomplish as CEO?
My focus is not so much on changing, but instead on positioning the YMCA of Southwestern Indiana to continue to respond to the ever-changing needs of our community … That requires that we proactively assess the needs of our community and remain on the cutting edge of identifying and implementing programs that meet those emerging needs.

What do you believe to be the most urgent community needs that the YMCA can address?
Youth and adult obesity. For the first time in our history, the life expectancy of today’s children is shorter than that of their parents. Despite the certain advances in medicine and technology, our children are still expected to live shorter lives. We must take better care of ourselves and teach our children the importance of making a lifelong commitment to wellness.

You’ve said your only regret about your new job is that your grandmother, community activist Jeanette Benton, isn’t around to see you lead the YMCA. What does her legacy of service mean to you?
My grandmother served for many years as a commissioner on the board of the Evansville Housing Authority. Having lived in the old Lincoln Gardens, she brought to that position a unique perspective on the challenges that many public housing residents face … Her legacy of service always reminds me that we make a living by what we get, but we make a life by what we give. At her funeral (last August), I told the audience that I have never seen a person who had so little, by the world’s standards, give so much.