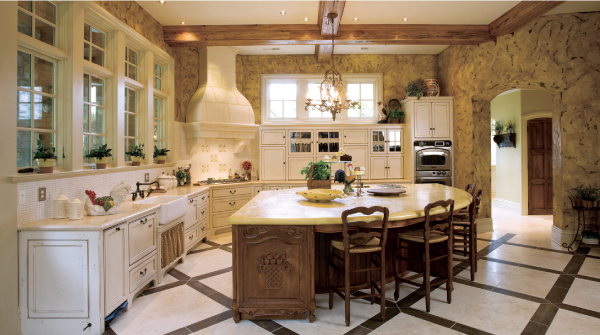 A dream home is not complete without a dream kitchen.

In the WNIN TV series, Owen interviewed homeowners from around the Tri-State, including Evansville, Jasper, Indiana, Henderson, Kentucky, and Owensboro, Kentucky. The program premiered in June.

“Anne’s kitchen and entire home is a dream home in the truest sense,” says Owen. “Once again, as with all the dream homes featured, the attention to detail is tremendous. You really feel transported to the French countryside from the moment you walk in the door.”

The Heinrichs’ kitchen is a part of the family room making one large great room. The Heinrichs’ home also was featured in “French Twist” in the November/December 2009 issue of Evansville Living. The island’s size of 13.5 feet by 9 feet allows for hosting parties and guests. It has a beautiful hand carving on it, done by a classmate of Anne’s who learned woodcarving from Karges Furniture and now has his own business in Cincinnati.

The countertops and range hood are made out of Arcus Stone, a crushed limestone mixture that was applied and formed on site. The floors are travertine with a wood tile plank to form a pattern and the walls are all Venetian plaster, giving an antique feel. The ceiling has large beams made out of pecky cypress, a beautiful textural wood full of oblong holes.

“I had asked for the most worm-eaten pieces they could find which gave access to having more darkened areas full of stain,” says Anne. “The fireplace front is limestone carved to resemble a French design. All of the light fixtures are antique pieces.”

The fourth episode first aired July 3 and the entire program series will replay until the end of the year.