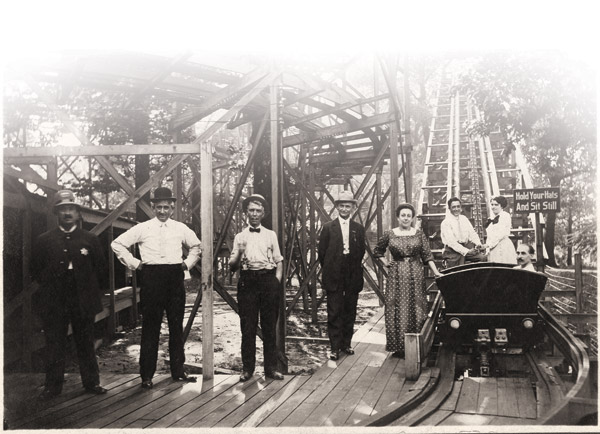 For almost 100 years, land along Pigeon Creek below Maryland Street was the site for recreation and entertainment for Evansville. Over time, the site served as a resort, amusement park, exposition center, picnic ground, civil war hospital and training camp, theater, and meeting place. Best remembered as Cook’s Park, the area also was known as the Salt Well, Pigeon Springs, Camp Scott, Convalescent Hospital No. 2, Crescent Springs, and Exposition Park and Pleasure Park.

All of this activity was the result of a saltwater well drilled in 1824. The resulting water was useless for making salt, but people began to come to the well for its perceived medicinal properties.

In 1842, Nathan Rowley and Thomas Gifford opened the Pigeon Springs resort. A hotel and baths were constructed in a park-like setting along the creek. Over time the resort was enlarged to include entertainment and became the picnic ground for Evansville.

Fourth of July fireworks, political rallies, and extravaganzas such as balloon ascensions were held at the park. The popularity of the site increased after William Heilman constructed a trolley line to the park entrance. The golden age of the location came in 1890, when F.W. Cook (Cook’s Brewery) acquired the property. The resulting makeover made Cook’s Park the place to go.

With the construction of newer parks, pollution in Pigeon Creek, and finally prohibition, the park declined. In 1919, Mayor Benjamin Bosse bought the property as a site for expositions to promote Evansville. As Exposition Park and Pleasure Park, the area became a true amusement park. Additional rides, such as a carousel and a Ferris wheel, were brought to the site. As Pleasure Park, the area seemed to have found its niche.

In 1925, more than 300,000 people visited the park. But within five years, the site was closed, a victim of the Depression. In 1931, the rides were moved to Mesker Park. After the buildings were razed, the city bought the property for a future park. Interest was briefly revived when the city, with Public Works Administration funds, proposed the construction of a large pool complex. In 1942, the wartime housing shortage saw the site being used as a trailer park for defense workers.

After the war, the terrain of the area was changed and the Wallace Field was built. Today, the Nut Club Park and Pigeon Creek Greenway occupy the area that was once Evansville’s Pigeon Creek Coney Island.