Eyes in the Sky

Travelers familiar with the Evansville Regional Airport of years past now might think they have landed in the wrong city when disembarking a flight into the terminal. Extensive renovations and improvements to the terminal, airport exterior, and building infrastructure completed at the beginning of the year have given passengers an entirely new experience when flying in and out of the region.

The $20-million project is just one of many changes the Evansville Regional Airport has seen throughout the past seven years. In 2012, four jet bridges were installed and a project to relocate the airport’s runway began, which was completed in 2014. Three years later, in 2017, renovations on the terminal started. Then, in January, Nate Hahn took over as executive director, replacing previous executive director Doug Joest.

“Someone coming from a different airport, they would not know all this history and all these improvements that have been made,” says Hahn. “It’s nice that I’ve been here for that process. I was here for the runway relocation. From that point forward, we’ve seen that growth.” 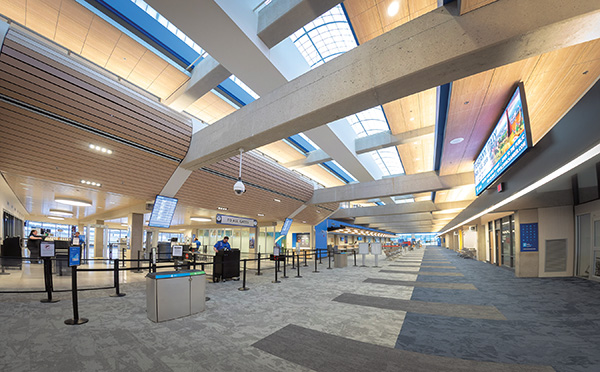 ▲ Among the many recent renovations to the Evansville Regional Airport, the biggest change was consolidating the two previous security checkpoints into one centralized screening area with two lanes, above. The change completely transformed the footprint of the airport.

“Adding Allegiant was instrumental in helping us further grow our leisure passenger base, which has occurred across the board on all four airlines,” says Leslie Fella, director of marketing and air service development for the airport.

The growth in service and upgrades to larger aircrafts over the last few years meant it was impossible to ignore the significant infrastructure improvements needed. Built in 1928, the original terminal was replaced in 1988 with the William H. Dress Terminal designed by Hafer. For the most recent terminal project, Hafer again took the lead. 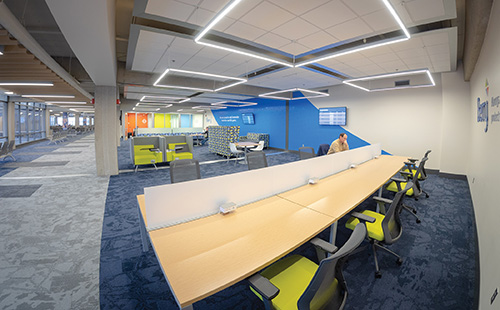 The gate areas were reconfigured with new seating, work spaces, and nearly 300 charging points. A new restaurant and bar was added post security, allowing travelers to relax before their flights or grab food to go. Covered walkways were installed from the terminal building to the rental car and passenger parking lots with a raised, baggage-friendly walkway into the main airport entrance. The curbs along the terminal loop also were dropped to accommodate roller luggage and be ADA friendly. New lighting and skylights were installed, along with other energy efficient improvements.

“I think those are small things you overlook when you’re thinking about it, but in reality those are things that affect us the most as a passenger,” says Hahn. “We’ve done little things the average person may not pay as much attention to but I think are really key for long-term viability of the airport and to create a better passenger experience.”

The most significant change was the consolidation of the two previous security checkpoints into a centralized screening area in the middle of the terminal with two lanes, the first a general passenger lane and the second dedicated to TSA Precheck. The centralized security completely changed the footprint of the terminal and allowed more amenities to be added post security.

A big portion of the renovations were completed through partnerships with local organizations and businesses. The new Berry Business Lounge was created with help from Berry Global and includes three private offices where travelers can hold meetings or take phone calls.

Next to the business lounge is the children’s play area developed alongside the Koch Family Children’s Museum of Evansville and the Evansville Vanderburgh Public Library. The play space includes an animated picture of Downtown Evansville on one of the walls with magnetic stickers of people, planes, cars, and iconic Evansville buildings that can be moved. On the other side of the children’s area are nursing rooms created in partnership with Deaconess’ The Women’s Hospital, and farther down the terminal is a pet relief area developed with help from Midwestern Pet Food, Inc. 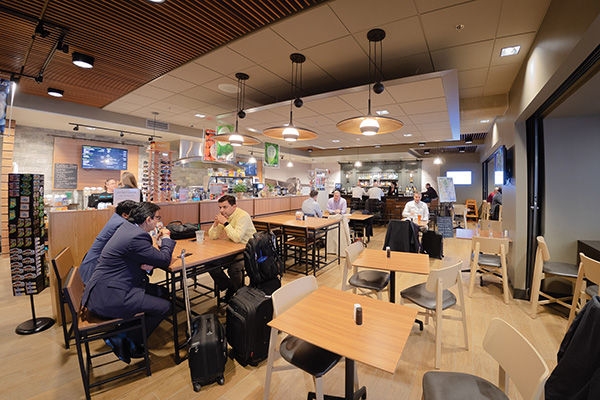 Most of the funding for the project came through local airport financing, however, the project also received a $5-million grant through the state’s Regional Cities Initiative, which helps communities transform their regions into nationally recognized destinations to live, work, and play.

“With Regional Cities, it ignited this project and allowed us to have the support we needed to remain competitive to the airlines,” says Fella.

Since 2009, the airport has increased passenger traffic 36 percent and continues to lower fares. The Evansville Regional Airport also is growing twice as fast as the national average. Planes flying out of Evansville consistently are full, which spreads the cost of travel over more people and reduces ticket costs.

Like the partnerships with area organizations during the terminal renovations, the project as a whole would not have been possible without support from the community. As more people realize the economic impact the airport has on the region, says Hahn, the airport will continue to grow and offer more competitive and better service.

“An airport cannot exist and thrive without having a community to support it,” he says. “I think that’s a good example of what the building is. They were growing with us, and now it’s our turn to grow with them and give back.”