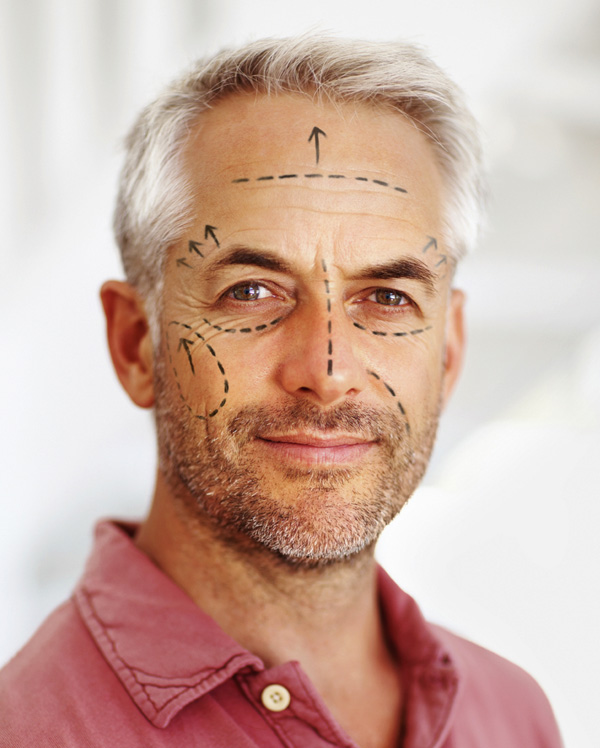 After losing a substantial amount of weight, Tim Holt had more energy, felt better, and was healthier. But something was nagging at him. The more weight he lost, the older he looked. As he slimmed down, his face began to show wrinkles. His cheeks appeared hollowed, and the fine lines were more pronounced. Holt wanted his outward appearance to match the way he felt on the inside. “There was no light bulb moment when I decided to get some work done,” says Holt, an oral surgeon in Henderson, Ky. “I just knew that I wanted to look how I felt.”

Holt (not pictured) is not alone. These days many men are seeking ways to look youthful, more energetic, and for some, to get an edge in the workplace.

Not that long ago, those wrinkles and lines on a man’s face were considered to be masculine and distinguished. For men, “aging gracefully” no longer is a popular option, says Dr. Alina Sholar, an Evansville plastic surgeon specializing in surgical and non-surgical cosmetic procedures. She’s seen a dramatic increase in the number of men seeking Botox or other cosmetic procedures — more this year than ever before.

“No question there’s been an increase in men seeking cosmetic procedures,” says Sholar. “In my practice alone, men account for 20 percent of my patients.” She has a section of her Web site dedicated to men and directly markets toward potential male patients at Evansville-area gyms. “We market differently to men because their concerns differ from women. Men do not want it to look overly obvious,” says Sholar.

According to the American Society for Aesthetic Plastic Surgery (ASAPS), men had more than 900,000 cosmetic procedures (250,000 of which were Botox injections, a procedure that freezes the facial muscles that produce wrinkles and fine lines). That accounts for more than 9 percent of the total in 2009. The number of all cosmetic procedures for men increased more than 8 percent from 2008.

Also of interest in the latest ASAPS report is the male approval rating of cosmetic surgery. Seventeen percent of men are more favorable toward cosmetic surgery compared to only five years ago, indicating a possible continued increase in future years.

Sholar says that the most popular outpatient procedures among her male patients are Botox injections, followed by microdermabrasion, Juvéderm, and chemical peels. These stats also mirror nationwide trends. The reasons men tell Sholar they want cosmetic procedures include wanting to look more youthful, appease a wife’s suggestion, and maintain a competitive edge in the workplace. Those especially interested in regaining their once youthful appearance are businessmen.

“The two professions I see the most are CEOs and salesman,” says Sholar. “For the CEO, they’ve made it to the top and want to stay young-looking. If employees perceive they are working for a fresh, energetic boss, it has a positive effect.”

Just as the reasons differ of why men and women elect to get cosmetic procedures, Sholar says that she also administers Botox differently to a man. A man’s facial anatomy differs from a woman’s and should be factored in when injecting Botox. While men need higher doses of Botox because of denser muscle tone, Sholar is careful not to overdo it. “Men are definitely more cautious,” she says. “Typically, men take more steps than women. Women are a lot more educated about procedures than they used to be, so they come in knowing what they want. Initially, men come to my office to seek more information, to be educated; then they pick and choose what’s right for them.”

To maintain the youthful glow, it’s recommended that men come back for injections every three to four months. Once the muscles have relaxed, it’s okay to push it back to a couple of visits a year (which average a cost of $300-$600 per visit nationwide).

Sholar says many of her male patients, like Holt, start off in her practice’s age management program. Patients first discuss concerns about their overall well-being. After a full lab work-up of things such as blood pressure and hormone levels, a fitness and nutrition plan is recommended. Once patients start seeing the benefits of the program, many begin to explore cosmetic procedures to match how they feel on the inside. Not surprisingly, men are a large percentage of this group.