Outside of the front entrance of Tom Wilson’s West Side home, a restored sign reading “Long Haven” greets visitors. When Wilson first discovered the sign in a crawl space of the cellar, it was bent and missing letters after being hit by a truck years ago. Many would have cast the sign aside and considered it trash left over from a previous owner, but Wilson was different. He reconstructed the sign, restored the 1934-built home on S. Red Bank Road, and kept its historic name. As a result, Wilson discovered his own haven.

He purchased Long Haven, which has a gravel driveway sitting off of the winding S. Red Bank Road and is shaded by beautiful forest trees, from Jack Baker in July 2013 and has lived there for about a year and a half. The home is constructed of 2-inch Northern Pine siding made to resemble natural logs.

Built for $15,000 in 1934 by Louis E. Long, the home was his and wife Catherine’s haven for two short years until Louis’ death. Their daughter Mildred married Dr. Herman Combs, a former Vanderburgh County coroner, and the couple resided in the home until Combs’ death in 1981. His wife and her sister Aurelia resided on the property until they passed away. At one time, the two-story home with a basement sat on 16.6 acres and had horse stables and an 88-foot-long grape arbor leading to a picturesque gazebo (torn down in the early 1990s). The home was auctioned in 1983, and then subdivided, leaving the 1.7 acres which it occupies today. 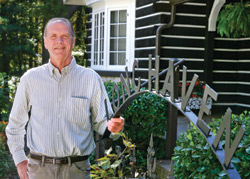 Since the Long family’s ownership, there have been four owners including Wilson. Before Wilson purchased it, the home was for sale for nearly two years and deteriorated without proper maintenance. Wilson retired from AT&T after 35 years in 2009. He continued to work construction jobs until 2011 when he retired full time. An avid antique collector and woodworker, he has made it his mission to restore the home to the way it once was.

“I always wanted an old house to restore,” says Wilson, who grew up near Angel Mounds State Historic Site in Newburgh, Indiana, and later lived on the East Side of Evansville for most of his life. “This one was in definite need of restoring. It was in really bad shape. The guy who owned it before me had moved to South America and he was here very little for two to three years and it fell into disrepair. There was some solid growth and you couldn’t see the house from the road. There were a lot of things to fix, and I’m still fixing.”

“I’ve worked on it just about everyday since I bought it,” he says. “I try to do just a little something to improve it every day. The several owners did some good things for the house, but it just needed so much more.”

Evidence of Wilson’s restoration — completed with help from his brothers — can be seen throughout the property of the two-story home beginning with the outside. His brother Ernie Wilson is a retired teacher from Caze Elementary and Dayne Wilson is retired from Lensing Building Specialties and has spent many hours helping Tom with projects and providing guidance. One of the first projects they tackled was removing brush that occupied the front yard, which made it nearly impossible to see the house from the road. He also worked feverously to remove the invasive kudzu plant from his backyard and planted wildflowers, added a swing, and removed several cisterns hidden on the property for water storage. The property has 24 different varieties of trees, including the largest known Canadian Hemlock and the only European Larch tree in Vanderburgh County.

One of the many things that attracted Wilson to the home was the workshop in the backyard, which has an adjacent deck and brick oven and grill for entertaining. Wilson is continuously working on projects, whether it is for the house’s restoration or on antiques he finds that need attention. This year he plans to remove the remaining cisterns, replace the concrete off the basement, and run some drainage lines. Wilson uses the basement/garage as another work area and jokes that he is a valued customer at the nearby hardware stores for the amount of supplies he purchases, including the many gallons of paint he used to paint the basement and the other rooms of the house.

Much of the work involved in the restoration of Long Haven has been painting each room (except for the kitchen), with extensive renovation work done in the dining room, front and rear bedrooms, and the bathroom off the rear bedroom. He also added a new stairway to the basement.

▲ Wilson, an avid antique collector and woodworker, decorates his home with many of his special finds including a Victrola with an oak horn he’s had for 20 years and a collection of carved wood bottlestoppers.

Nearly all of Long Haven’s 3,460 square feet are furnished with antiques that Wilson has collected over the many years. The collectible items range from antique furniture, clocks, telephones to vintage toys, baking good boxes and supplies, and games.

“I’ve accumulated a lot of antiques over the years and this house works really well for the type of decorating I’m doing,” says Wilson of his three-bedroom home. “If I hadn’t been retired and been able to work on it like I have, I’m not sure when all of this would have gotten done. I love antiques and that period of time — it has a unique look to it. I would like to keep it the way that it was.”