When Edward Mead Johnson Sr.’s oldest son Ted was not expected to survive infancy because of a heart condition, the family consulted Dr. Abraham Jacobi, recognized today as the father of pediatrics, who prescribed a mixture that was yet to be commercially produced. Ted thrived on what would later become Dextri-Maltose, a specialty carbohydrate powder designed to be mixed with milk and Mead Johnson & Company’s first major product.

On the banks of the Ohio River in Evansville at a once-bustling cotton mill that had sat vacant for five years, Edward Mead Johnson Sr. found a new home for his New Jersey business in 1915 after the potato starch used to make Dextri-Maltose could no longer be imported from Germany because of World War I. Evansville’s location allowed for an abundant supply of corn, an alternative source of carbohydrate, rail access, affordable utilities, and a willing workforce. Today in Evansville, Mead Johnson Nutrition sits on 52 acres, occupies 47 buildings, employs nearly 1,000 people, and impacts the lives of millions of children and mothers around the world. This year, the company celebrates its centennial anniversary in the River City. 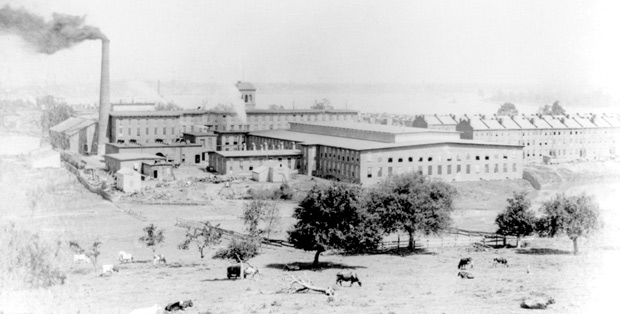 ▲ The Evansville Cotton Mill had been vacant for five years in 1915 when Edward Mead Johnson Sr. first visited the site.

“When I was young, I walked past Mead Johnson every day going to and from school — first Centennial Grade School and then Reitz High — and always wanted to work here,” says Norwanda Macke of Evansville, who has been a Mead Johnson employee for 44 years. “The company was so well respected and being employed here opened a lot of doors for you. I’ve been with the company 44 years now and am proud of the part I’ve had in nourishing babies around the world.”

Over the last century in Evansville, Mead Johnson, which was founded on Nov. 29, 1905, in Jersey City, New Jersey, has transformed from a small business into a Global Operations Center supporting the company’s locations around the world in North America, Latin America, Europe, and Asia-Pacific. The Evansville site produces more than 140 different formulations and ships them to more than 30 countries. These products are designed for preterm, low birth weight babies; term infants; children; and those born with allergies or metabolic disorders. Although today Mead Johnson is an international success, the company had humble beginnings.

After moving to Evansville in 1915, it took almost a year of renovation before the company began producing Dextri-Maltose the following spring. Mechanical problems and startup costs made the first few years difficult but by 1920, the business was poised once again for growth. A year later, Johnson’s three sons each helped operate the company, including Lambert, his second son, who had developed the process for making Dextri-Maltose and also readied the Evansville facility for production.

Because scientific breakthroughs in milk-based products were happening quickly in the U.S., Mead Johnson & Company, a forerunner in modern infant formula, worked to deconstruct cow milk and recombine it with other nutrients to create an appropriate infant feeding product. To further its milk-based production capabilities, the company purchased a cream cheese factory in the heart of dairy country in Zeeland, Michigan in 1924.

During the next decade, Mead Johnson went through a series of changes with the death of Johnson’s oldest son Ted at 42, succumbing to the heart condition he had been born with.

Four years after Ted’s death, Johnson died suddenly of a heart attack at 81. Lambert took over as president in 1934. He would serve as president for 21 years until 1955 when he retired and passed away a few months later. Lambert’s nephew Daniel Mead Johnson became the third generation of his family to serve as CEO and held the reins when the company introduced its most well-known product — Enfamil.

The enhancements to Mead Johnson’s Enfa products occur every day as scientists work to learn more about nutrition needed for both mothers and infants. The Mead Johnson Pediatric Nutrition Institute, a 43,000-square-foot building located in Evansville, is a $26 million facility built in 2010 and allows scientific technology and research to be paired with manufacturing, making product development more efficient. Evansville’s technology center is one of four around the world; the other three are in Mexico, Singapore, and China.

“Experts agree that good nutrition early in life supports lifelong health, so our greatest accomplishment has been the creation of more than 50 high-quality, science-based feeding products that have made such a positive difference in the nutrition, health, and development of millions of infants and children around the world,” says Carol Lynn Berseth, MD, director of Global Clinical Innovation at Mead Johnson. “Included among those are our 17 specialty metabolic products that address a variety of dietary conditions and diseases and save lives every day. We know that most mothers use formula at some stage of their children’s lives, and we are honored to have earned their trust.”

Over the past four decades, Mead Johnson has conducted more than 500 studies on various aspects of infant nutrition and development. Shay Phillips, Ph.D., associate director of analytical sciences at the Mead Johnson Pediatric Nutrition Institute, helps research and develop methods that are used to test the company’s products. Other research focuses on human milk as part of the Global Exploration of Human Milk (GEHM) Study, a collaborative effort between Mead Johnson and the Cincinnati Children’s Hospital Medical Center. The study examines data from breastfeeding mother-infant pairs in the U.S., China, and Mexico.

“We’re finding as we work through accurate methods, and understanding and measuring these samples, we’re being approached by several different universities and groups that are also doing work in human milk to tap into our expertise and we’re tapping into theirs,” says Phillips. “We are working in a more collaborative manner in the whole body of human milk research.”

Phillips says the advancements in technology and instrumentation are revealing information about vitamins, minerals, and other data that would have remained hidden 20 years ago.

“That’s where it is really important for us, being a science-base company, to stay in front of technology,” says Phillips. “As these instruments come out, we need to understand how to use them so we can continue to build these insights.”

As data is generated, Sarah Maria, Ph.D., a research scientist in discovery and analytical sciences at Mead Johnson, analyzes it as a whole. Often these findings are shared at scientific conferences.

“The benefit of taking part in conferences is we don’t realize how powerful our results are until we get there,” says Maria. “For us our analysis is a very normal day at the office, but when you see the incredible enthusiasm for what we are presenting, it is really exciting and very motivating.”

“We are proud of the medical and nutritional scientific research we have supported that has resulted in countless nutritional breakthroughs and innovations,” says Berseth.

“Importantly, we appropriately share our factual, science-based information with researchers, health care professionals, and parents because we understand that shared facts and knowledge result in better decisions and increase the probability of additional discoveries.”

In addition to the research and collaborative efforts Mead Johnson performs, the company’s level of care for its customers is evident in its customer service. Lisa Barclay-Sebree works as a manager at the call center at Mead Johnson and says the center receives 1,200 calls a day and 260,000 calls a year.

“A lot of time mom’s first introduction to Mead Johnson is by looking at promotional materials or our products’ toll free number and calling us,” says Barclay-Sebree. “We take every call very seriously. We are supporting mom at one of the most wonderful but most vulnerable times in her life.”

“The reason why we use these technologies is because we know most of our moms at the child-bearing age are using them. Moms are very active in these media channels and we want to be there to support them,” says Barclay-Sebree.

Employees at the call center undergo an extensive training program for six to eight weeks and are provided legally approved answers, so there’s never any “winging it,” she says.

The company has a long heritage of corporate citizenship, which is why on June 12 Mead Johnson announced the donation of $100,000 to the City of Evansville Parks Foundation to upgrade playgrounds at four local parks throughout the city with equipment specially designed for toddlers and young children. The gift makes it possible to install new playground equipment in Garvin, Akin, Fulton, and Eleventh Avenue parks. Jeff Jobe, senior vice president of Global Technical Operations at Mead Johnson, says the donation of new play spaces will help improve the overall health, well-being, and development of local children in Evansville. 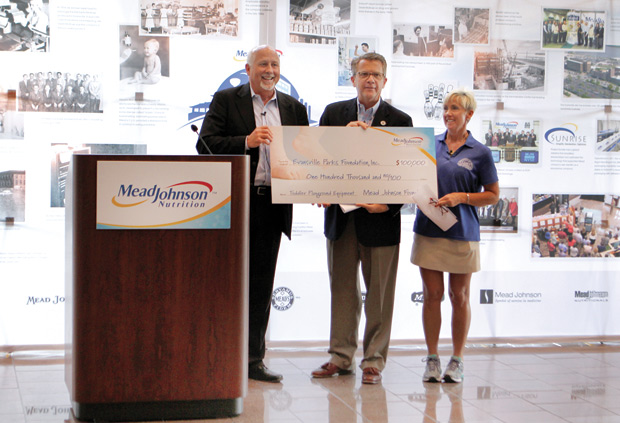 ▲ Jeff Jobe, senior vice president of the Global Technical Operations at Mead Johnson, presents a check for $100,000 to the City of Evansville Parks Foundation. Mayor Lloyd Winnecke and Denise Johnson, executive director for Parks and Recreation, accepted the donation.

“Mead Johnson has helped shape our city for the past 100 years, and this donation to the Evansville Parks Foundations is yet another example of the important role Mead Johnson plays in our community,” says Mayor Lloyd Winnecke. “This donation allows us to provide much-needed new equipment that will benefit children around the city. I am pleased that Mead Johnson has chosen to invest in our youth through this project.”

In addition to improving the health of the community, Mead Johnson also has invested in using cleaner energy.

In 1999, natural gas replaced coal as the primary energy source to generate steam for the Evansville facility. Ten years later after a multi-million dollar steam plant upgrade, landfill gas, a renewable resource, replaced the use of natural gas. Over the last 15 years, the company has decreased the amount of C02 from fossil fuels by 70 percent — improving the environment for generations to come.

In addition to helping the environment, Mead Johnson aids the Evansville community as an economic driver for the area, says Jobe.

“As a global, science-based company, we attract a diverse and highly educated workforce that contributes to our community’s cultural enrichment,” says Jobe. “We also have a long track record as one of the city’s larger private-sector employers and a leading economic driver for the area.”

As Mead Johnson celebrates its 100th year in Evansville, the company looks forward to future milestones and what that means for its mission to nourish the world’s children.

“Throughout our 100 year history in Evansville, the city has supported Mead Johnson’s growth and success,” says Rick Baumgart, vice president of the North America Supply Chain at Mead Johnson. “Likewise, our company and employees have proven themselves to be good corporate citizens through community volunteerism and philanthropic donations. We will continue our legacy of developing and providing innovative high-quality products in support of our mission to nourish the world’s children for the best start in life — and Mead Johnson and our employees will also continue our legacy of being good citizens of this great community.”