Ask an Evansville resident what foods make them think of home and one dish prevails — the tenderloin. A quick Wikipedia search of “pork tenderloin sandwich” specifically calls out Hoosiers’ love of the dish — “popular in the Midwest region of the United States, especially in the state of Indiana.” In Evansville, customers would be hard pressed to find a local tavern, diner, or family-style restaurant that doesn’t have tenderloin on the menu.

Whether looking for home-style, deep-fried cooking or unique and fresh cuisines, Evansville is proving its food identity never tasted so good.

Father-son duo and Knob Hill Tavern owners Dan and Karson Kollker list “giant tenderloins” among the most classic Evansville dishes along with thin-crust pizza and catfish fiddlers — all of which are served at the Newburgh, Indiana, tavern.

The supposed birthplace of the breaded pork tenderloin is up in Huntington, Indiana, created by Nick Freienstein in 1908 at his diner Nick’s Kitchen, which still is serving customers today. Evansville, however, has its own collection of tenderloin aficionados.

“I think that’s always been the hook for this place,” says Dan. “We have a great grilled and breaded tenderloin. Our sandwiches are quite good, and we have a very good pizza — thin-crust pizza. We also serve fried chicken.” 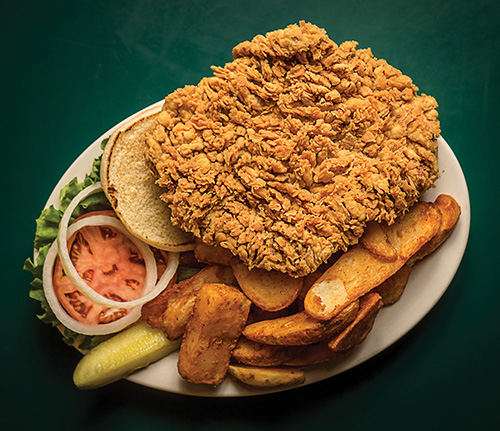 While the menu sticks to the well-loved classics, Knob Hill has rooted itself in the Newburgh community by being the oldest restaurant serving up these favorite dishes.

“I just think it’s a place that’s easy to fit quite well in Newburgh,” says Dan. “Personally, I think it’s a pretty neat place in an awfully nice town. There’s nothing else like it in Newburgh.”

While many tavern restaurants may seem similar on the surface, the key to success in Evansville is understanding the nuances of the city’s culture and people. No other restaurant in Evansville does this quite like Gerst Haus.

“There was, maybe still is, a lot of German heritage around this area, especially this side of town — the West Side,” says Paul Ankenbrand, general manager of Gerst Haus. “We kind of try to hold true to that. I just think it was the perfect fit.” 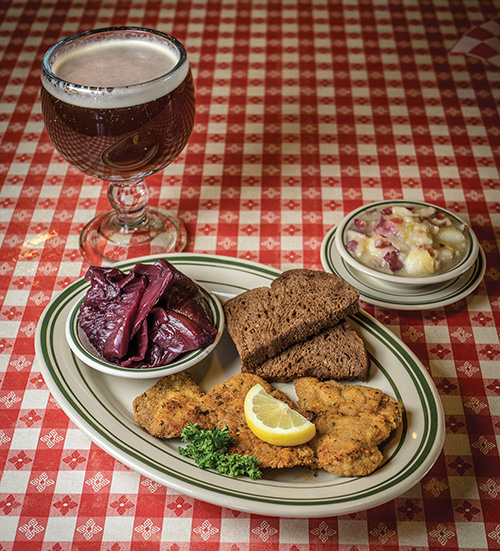 At the West Side beer hall and restaurant dishes like the tenderloin or wiener schnitzel are not only an homage to the restaurant’s German niche but also to the heritage found throughout the area. And, of course, no wiener schnitzel would be complete without a giant fishbowl of beer on the side.

As synonymous as tenderloin is to Evansville, the area’s unique style of pizza is just as popular. When it comes to thin, cracker-crust pizza, customers know to go to Turoni’s — the classic pizza joint that started the trend 56 years ago.

Owner Jerry Turner, who named the restaurant by combining his last name with the word “pepperoni,” says the reason he believes the cracker thin crust is so popular is simple — people like less dough because less dough means fewer calories.

“I thought it had a future,” he says. “There were only about three to four pizza places in Evansville at that time. Now, I’m thinking we have between 75 and 100.”

Aside from the pizza, people also flock to Turoni’s for the beer. Turner said the idea to start brewing beer was an obvious choice — pizza and beer are a perfect pairing. Turoni’s first alcohol license was purchased in 1970, and the restaurant has been brewing its own beer for 20 years now.

Since then, Evansville has taken Germanic beer culture and run with it, welcoming local breweries almost as far back as the city’s existence. Today, craft beer connoisseurs have options when looking for a local brew from Turoni’s to new players like Tin Man, Evansville Brewhouse, Maiden’s Brew Pub, and Carson’s.

Residents can go on for hours about their love for tenderloin and cracker-crust pizza, but there is one spectacle of food culture in Evansville they can’t escape. Love it or hate it, fried food from the West Side Nut Club Fall Fest is what Evansville is known for — the good, the bad, and the brains.

From deep-fried butter to pork parfaits, the festival is a mecca of fried food and thought to be one of the largest street festivals in the country. Even cooking star Alton Brown, when he stopped in the River City for his “Alton Brown Live: Eat Your Science” tour, had something to say about Evansville’s and the South’s affinity for consuming animals and animal parts anyone else would toss out.

“You’re more Kentucky than you are Indiana, in a way,” says Brown. “The food identity I got when I was there was most definitely Southern, which is delightful.”

While Evansville may be known on a broader level for its Midwestern-meets-Southern fried feasts, residents in the area have been expanding their palates.

“Normally Evansville isn’t seen as a cultural mecca,” says local chef Eli Haddix. “But food wise you have a lot to choose from, and it wasn’t always that way.” 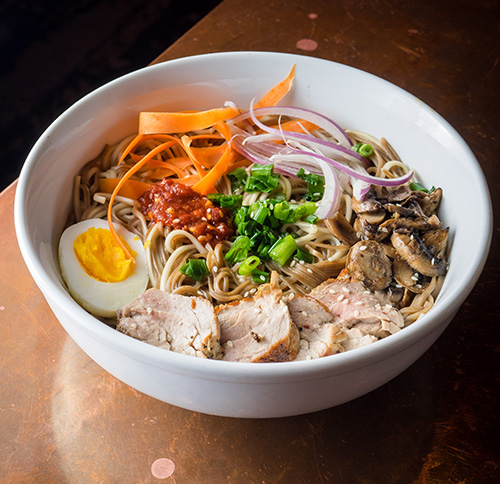 No other area in the city has experienced a renaissance quite like Downtown and, more specifically, Haynie’s Corner. It now is home to some of the most unique and creative restaurants like Walton’s International Comfort Food, Sauced, and The Dapper Pig, with nightlife also bustling in spots like Bokeh Lounge, Evansville Brewhouse, and Mo’s House.

“If you’re not on the East Side at Pangea or an Asian restaurant, you’re on Haynie’s Corner or on Franklin Street,” says Haddix. “Those are two that have really cemented themselves as the go-to culinary areas in town.”

For Wess Rose, general manager at The Dapper Pig, bringing those new flavors and experiences to Evansville is what inspires the work being done and food being prepared. It’s not a complete departure from the comforts Evansville loves but a New American twist.

Rose admits one challenge facing the Evansville community is its love for routines. There is a certain kind of comfort in the knowledge you can go to a restaurant and order the same dish from the same server and know exactly what you will get. It’s quite literally area restaurants’ bread and butter.

Habits are hard to break, but along with the emerging restaurant scene in the community is an appreciation for independent restaurants over chains. As a test market over the decades for several products and companies, Evansville has shown its affinity for the consistency and familiarity of franchises from testing Papa John’s reintroduction of the pan pizza in 2016 to the fast-food-sit-down hybrid McDiner introduced in the early 2000s. But Evansville slowly has shown it is open to new flavors and experiences never seen here before. 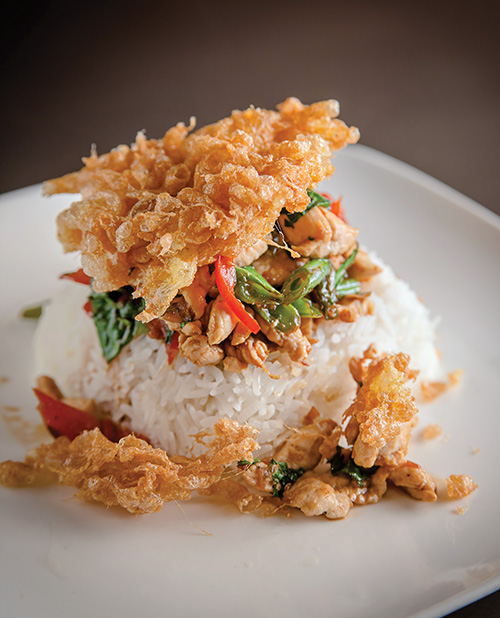 Pangea’s executive chef Wanphen McDonald admits she has had moments where she didn’t think she would make it in Evansville. Now, she is at the helm of one of the most successful new restaurants in the area. At Pangea, McDonald brings her classic culinary training from Bangkok, Thailand, to plate up new dishes, ingredients, and foods to members of the community.

“I take this as a challenge because Evansville is so quiet,” she says. “Sometimes people don’t get what I’m cooking. I had my doubts. I feel strongly and very confidently that if people open their mind, I can change their mind.”

McDonald says the biggest hurdle diners need to overcome is to not hold themselves back from new dishes. Customers think they know what they like — and they do — but she thinks if people are more open they will find even more foods to enjoy. The chef had customers tell her they didn’t like coconut milk, so she made them some food that had coconut milk in it. They loved it.