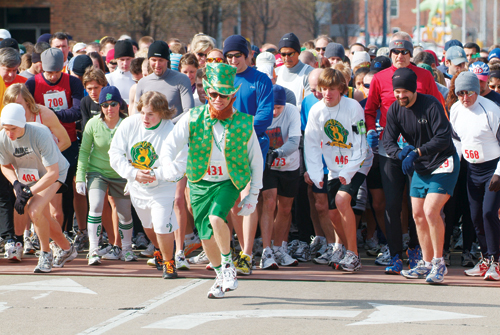 The longest recorded shoe chain in human history is 18,992 feet. To break that record, Jim Bush needs 10,000 pairs. In October, he asked the community for support, and a shoe collection drive began. Currently, Bush and his group of volunteers have gathered 4,000. The deadline coincides with the St. Patrick’s Day Run of Luck on March 13. The record, though fun, is ancillary compared to Bush’s main mission: The shoes collected are donated to those without footwear.

Four years ago, Bush, the founder and director of the seven-kilometer road race and one-mile walk, adopted the shoe collection efforts of Soles4Souls, an international nonprofit that’s given more than 5 million shoes to people in more than 125 countries since 2005. In honor of the race’s 10th year, Bush wanted 10,000 shoes, a lofty goal; last year, 2,000 were collected. This year, through a commitment from Shoe Carnival and Soles4Souls, 3,000 shoes will go to Evansvillians in need of quality footwear.

This charitable aspect is one reason this Downtown event doesn’t carry the same debauchery generally associated with St. Patrick’s Day celebrations. The event includes giveaways, costume contests, and a kids’ race. “We have a good, family-fun event,” Bush says. “We try to have a little something for everybody, not just for runners.”

To learn where to drop off shoes, visit www.runofluck7k.com.