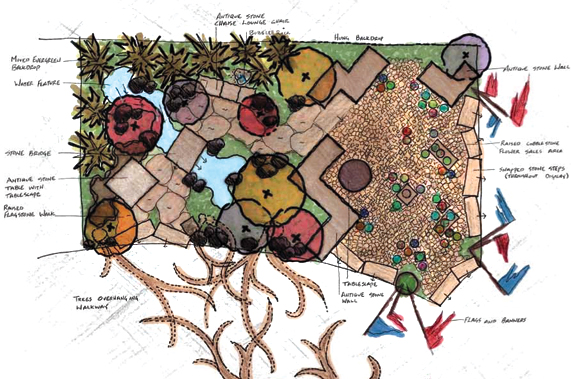 The designers at Landscapes by Dallas Foster, Inc. are no strangers to home shows, but their exhibits typically don’t feature Old World-inspired flower markets, antique stone walls and furniture, and hundreds of flowering plants and trees. Then again, the Indiana Flower & Patio Show isn’t a typical home show, says Brian Wildeman, a designer with the Vincennes, Ind.-based company and [Evansville Living’s] “Digging In” columnist.

The annual Indiana Flower & Patio Show, held March 13-21 at the Indiana State Fairgrounds in Indianapolis, features around 30 gardens and landscapes by the state’s top landscapers and outdoor living experts, including Pam Parker, owner of JP Parker Co. Florist in Indianapolis and Franklin, Ind. Interested in working with a landscape design company located outside the Indianapolis area, Parker — a perennial favorite at the Indiana Flower & Patio Show for 30 years — called Foster last November and proposed collaborating at 2010’s show.

Every year, the show has a theme that all gardens must follow. Foster’s staff and Parker designed their space around [The Adventures of Robin Hood], which recounts the exploits of Robin Hood, his band of Merry Men, and the fair Maid Marian in medieval England. “It has feminine and masculine sides to it,” says Wildeman, which inspired “elegant floral displays and a natural, native look.”

Parker will sell cut flowers in an area resembling a medieval market, and the rest of the exhibit is the Dallas Foster team’s take on Sherwood Forest: mature trees, three water features, moss-covered boulders, and antique stone with branches arching over the walkway. Approximately 100,000 visitors are expected to walk through the exhibit and the other gardens. “It is a garden show for Indiana,” Wildeman says, “not just Indy.”