In 1966, the Warrior was the mascot of the high school surrounded by cornfields on what was then considered the far East Side of Evansville. In its fifth year, the Harrison High School football team headed to the Reitz Bowl to play perennial West Side powerhouse Reitz High School in front of 12,000 spectators. After losing to Reitz every year since its inception, Harrison harnessed a warrior spirit that night and pulled out the victory (14-7).

This August, Ross Atkin, now a staff reporter with The Christian Science Monitor in Boston, reflected on his sweat-soaked, humidity-high, two-a-day practices in late summer as a linebacker on that Harrison squad by contacting old teammates, who shared their memories of this annual rite of passage for teenagers on the gridiron. “Cold showers never felt so good,” Atkin says. “And, there were some greater crooners sometimes in the shower room, belting out Sonny and Cher hits and other top 20 fare.” With the current high school football season underway, we pass their experiences on to our readers.  (Read more on Page 2)[pagebreak] 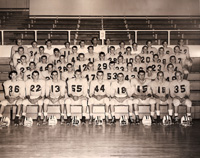 Even today the mention of the date August 15 [editor’s note: the former official start date of high school football practice] still has the emotional effect of hearing the death toll: Dong… Dong… Dong. But, to fully appreciate the dread, you also have to remember what August is like in Evansville. For example, today, the high is 98 degrees with about 80 percent humidity and a heat index of 105 to 110. Thankfully, we didn’t have heat indexes in the ’60s. We just knew it was hot.

Now they caution everyone to drink lots of water. Back then, we were cautioned about drinking too much water and were given one water break during a two- to three-hour practice and force fed salt pills. What water we contained was quickly transferred to the heavy cotton jerseys and then caked with dust to form mud patches. At the end of practice, I can remember watching guys doing wind sprints with mud sailing off of them as they ran. Unfortunately, I never ran fast enough to generate that effect.

Then: Offensive end and defensive back
Now: President and CEO of VPS Architecture in Evansville

One of my fondest memories involved both Steve Barnett and Coach Lowell Galloway. Now, Steve and I were notorious during summer practices, in particular, for being screw-offs during calisthenics. We were always in the way-back rows, halfway hiding from the coaches and cheating as much as we could. Our jumping jacks were more like flapjacks; our pushups looked like girls’ with knees often touching the ground. We would get in about one pushup for everybody else’s three or four.

One time in summer practice, we were way in the back, facing each other during pushups and laughing at everybody else when I saw Coach Galloway coming our way. He was dead ahead and directly behind Barnett, who couldn’t see him coming. All of a sudden, I started pumping out pushups like there was no tomorrow, like a jackhammer or some other machine, which made Barnett laugh even harder because he thought I was putting everybody on. So he just kept laying low and laughing, when all of a sudden Coach Galloway’s big size 13 was driven straight up Barnett’s rectal area, and Steve was driven forward, smashing helmets with me. The outcome of it all was 10 laps for Barnett and a good football story that I’ve told for many years. 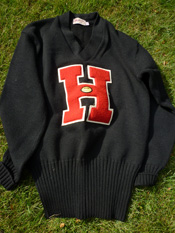 I remember one time, when we were assembled right before practice, Mr. Mays came into the locker room. He got everyone’s attention. Then he said, “We are losing a lot of practice jerseys, and it has come to my attention that some of you have stolen them and are wearing them around town. We paid a lot of money for those jerseys, and I’m taking this theft thing VERY SERIOUSLY.”

His voice raised louder and louder. “AND DO YOU KNOW WHAT I AM GOING TO DO IF I CATCH YOU WEARING ONE OF THESE JERSEYS OFF THE PRACTICE FIELD?” Silence and big-time trepidation among the team. “I AM GOING TO MAKE YOU GIVE IT BACK!” 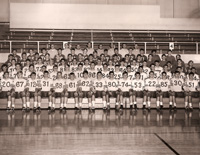 How much did I love the two-a-day practices?
Let me count the ways:

2. I loved the nose-burning, eye-watering fragrant aroma of the stale locker room early in the morning.

3. How could I not love the elastic straps of the shoulder pads after they rolled up like piano wire from the sweat and the scars I still bear to remind me?

4. I loved doing those cut-away drills [editor’s note: a player in elevated push-up position threw his arms to his side and crashed to the ground, supposedly to toughen up the stomach] so soon after breakfast.

5. Who didn’t love running the tires near the end of practice after taking a lap around the track? That alone was fun, but when I tripped and fell flat on my face with the next guy or two running up my back with their cleats, now that was fun!

6. I loved hitting the seven-man blocking sled and pushing it up field with the extra weight of two coaches and [Assistant] Coach Harwood kicking our helmets while screaming, “Drive! Drive! Drive!” I think that’s what happened to my hearing.

7. I loved it when Coach Claybourne would yell at me, “Leebungoof, don’t do as I do; do as I say!”

8. The most fun for me in those two-a-day practices was the two-man tackling drill where we started on our backs helmet to helmet. Coach would yell, “Go!” Then, he would toss the ball to one player, and the other would have to take him down. I looked forward to being paired with steamroller [Dave] Davies, especially when he got the ball.