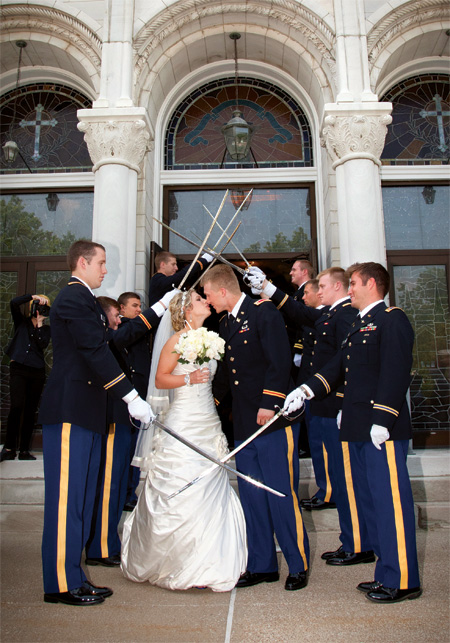 After months of planning, three local couples recently said their “I do’s.” Here, the newlyweds share how they made their wedding day unique and personal.

Their Story
The couple met their freshman year at the United States Military Academy at West Point. After graduating in May 2011, the Army officers wed before moving to Killeen, Texas, where Maria, a financial officer, and Shane, an engineering officer, are stationed at Fort Hood.

Their Wedding
Although a traditional, full-mass Catholic ceremony, the couple added some personal touches that reflected their military affiliation such as the Army Service Uniforms (dress blues) worn by the groom and groomsmen and a saber arch as they exited the church. At the reception, says Maria, “We even cut our cake with a saber.”

A Memorable Moment
The garter removal. “The groomsmen lifted me up in my chair,” says Maria, “and Shane took the garter off while I was in the air at his level.” It was an uplifting experience she wasn’t expecting.

Advice for Engaged Couples
Keep it simple and make it about yourself, says Maria. “It’s going to be special regardless.” Also, she adds, “Make sure the girl includes the guy in the planning process.”

Nichole and Brian Bristow of Stafford, Va.
(Both originally from Newburgh, Ind.)

Their Story
The first time Nichole met Brian was in high school. She was a junior and he was a few years older, but both attended Castle High School in Newburgh, Ind. They were engaged for the first time Nichole’s senior year, dated through her freshman year of college, and then went their separate ways. Ten years later, Brian found Nichole on Facebook, where he contacted her from his home in Virginia before visiting her two months later during Christmas of 2009. Nicole knew immediately that he was the one — again. Three months later she moved to Virginia, where she currently works as an insurance advisor with Farmer’s Insurance and he serves as an HVAC technician at North Virginia Community College.

Their Wedding
To reflect the couple’s fun and youthful personality, their untraditional wedding at the Evansville Zoo provided a vast array of entertainment. To start with, the ceremony was conducted Dr. Seuss-style — even the vows that included Brian’s two kids rhymed. Her bridesmaids wore lavender dresses with flip-flops, some guests sported animal print attire, and Nichole walked down the aisle in an ivory gown and red Dock Marten boots. The reception, which was an indoor/outdoor mix at the Zoo’s Rainforest Grill restaurant, included all-evening access to Amazonia — a hit with the kids. “I wanted to make sure it was family and kid-friendly,” says Nichole.

A Memorable Moment
For Nichole, a fond anecdote from her wedding came during the processional. “The most memorable moment was walking down the aisle with my dad,” she says, “and seeing Brian and knowing that was my future.”

Advice for Engaged Couples
From her hair stylist backing out at the last second to her bouquet needing an immediate redo, the day-of for Nichole wasn’t seamless. “My wedding was a series of almost-catastrophes that were averted by amazing people,” she says, referring to her sister-in-law who took over hair duty and a family friend who redid her flower arrangement. What she learned: “Have patience — and don’t hold on to your plans too tightly.”

Steve and Lisa Keck of Evansville
(Steve grew up in Mt. Vernon, Ind., and Lisa in Bowling Green, Ky.)

Married May 14, 2011, at St. John’s Episcopal Church in New Harmony, Ind., with a reception at the Red Geranium Restaurant

Their Story
Steve and Lisa met on eHarmony, an on-line dating site that claims to have helped millions of couples find love. “We keep waiting for them to call and put us in one of their commercials,” says Steve, laughing. Until fame finds them, the energetic couple resides in Evansville, where Steve is director of investments at Access Partners and Lisa is a speech pathologist at St. Mary’s Health System.

Their Wedding
In the quaint St. John’s church, the couple exchanged vows to a small crowd of eight, including Lisa’s two sons and Steve’s two daughters. “We didn’t want to make a big production of it,” says Steve. “It was a personal event.”

A Memorable Moment
While taking pictures before the ceremony, the photographer had Lisa walk into the New Harmony Inn, where the Kecks would spend their wedding night, as Steve waited in the front lobby. “All I could think was how handsome he was and how happy I was,” says Lisa. “And how I didn’t want to cry and mess up my make-up.”

Advice for Engaged Couples
Take time out during the planning process to decompress and be with each other, says Steve. On the big day, “if something gets screwed up,” he says, “keep in mind you’ll probably laugh about it later.”

•  First Come Love. Then Comes Engagement. – What to expect from your man before the “I do”
•  How to Customize a Shower – Wedding showers need not be the same
•  No Bridezillas – Tips for the wedding day