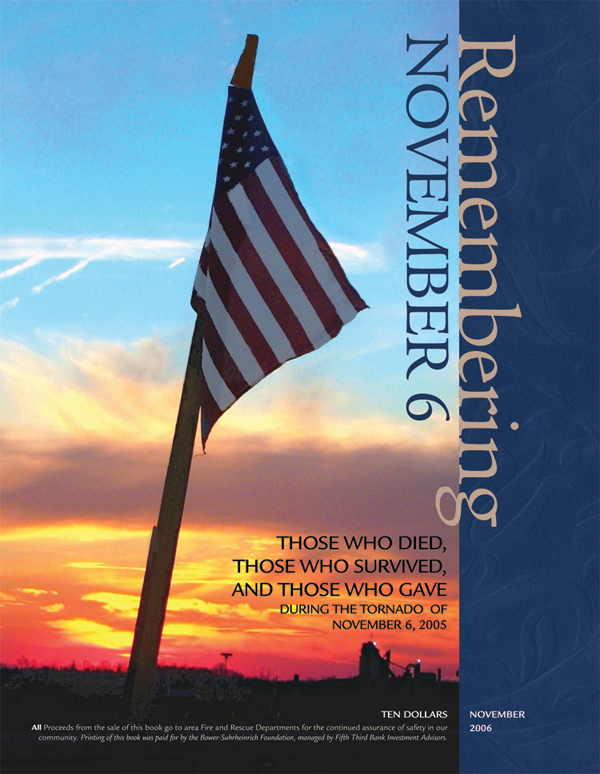 At 1:46 a.m. on Nov. 6, 2005, after a particularly warm and breezy Saturday in the Tri-State, Vanderburgh County officials alerted the community by setting off tornado alarms. Four minutes later, an F2 tornado with winds up to 157 miles per hour, ripped through Ellis Park Racecourse and began its 41-mile path of death and destruction into Southwestern Indiana. The twister remains the deadliest storm in Indiana in the last 40 years taking the lives of 25 people ranging in age from a newborn baby to a 78-year-old woman.

A year after the natural disaster, Evansville Living paid tribute to those who lost their lives in the storm in the November/December 2006 issue and in a 64-page account called “Remembering November 6.” Today, we reflect on the 10th anniversary of the horrific tornado.

A cold front across the Midwest paired with humid air ahead of it allowed thunderstorms to thrive and pick up intensity as they moved toward Southwestern Indiana. Security guards on duty at Ellis Park, located in Henderson, Kentucky, first spotted the funnel cloud forming.

The racetrack suffered millions of dollars in damages as the tornado killed three horses, and injured dozens more. A groom Tommy Lester also was injured. Ten barns were damaged as well as the track’s main grandstand and facilities.

As the twister crossed the Ohio River, it grew in intensity and became an F3 tornado traveling at 200 miles an hour and 400 yards wide. The storm tore through Eastbrook Mobile Home Park, just off of Interstate 69, where it damaged more than 150 mobile homes and killed 20 residents. Its path of destruction continued to Newburgh, Indiana, where it heavily wrecked more than 600 homes. The tornado was unrelenting as it sped toward Boonville, Indiana, where a young woman died, and raced into Degonia Springs, Indiana, where it took the lives of an entire family of four, before finally lifting near Tennyson, Indiana.

Ten years later, the community still remembers the hundreds of firefighters, rescue workers, police officers, military personnel, neighbors, and community volunteers who flocked to Southwestern Indiana to aid in search and rescue efforts. Today, visitors can pay their respect at the Tornado Memorial Park, located at the Eastbrook Mobile Home Park off of Lynn Road.