Mixing a family restaurant and a sports bar, Bubba’s 33 restaurant chain that came to Evansville’s East Side in April has roots in Texas Roadhouse but a style — and menu — all its own. Kent “Bubba” Taylor, the founder of Texas Roadhouse, founded Bubba’s in 2013 and the 33 in the chain’s name comes from the year the prohibition ended, 1933. 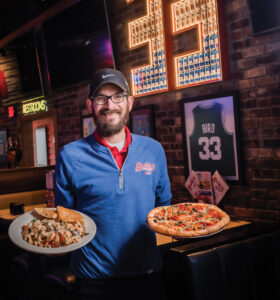 Kitchen manager Matt Ernspiker says the recently opened restaurant on Burkhardt Road — on the site of the former Logan’s Roadhouse — serves around 300 customers a night on weekdays and 1,000 a night on weekends. It’s a fresh start after the East Side Logan’s location was demolished. He says diners are drawn by the atmosphere, with TVs tuned to sports visible from every table and an expansive menu.

Managing Partner Kristen Nolcox says some of the most popular items include the Bacon Burger, pizzas like the Meaty Meat, along with the restaurant’s wing sauces and dry rubs, garlic knots, and beer selection. The chain also serves multiple kinds of pasta, salads, and sandwiches.

The restaurant’s commitment to serving fresh food from scratch — with nothing frozen or microwaved — makes Bubba’s 33 stand apart, Ernspiker says. Pizzas are rotated across 12 spots in the oven. They don’t cook simultaneously, so each stone can reheat after finishing its most recent pie. While the process is involved, Ernspiker says it pays off. 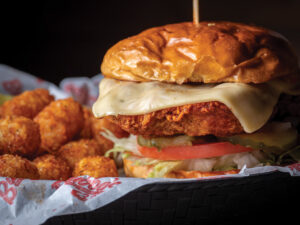 Nolcox says the restaurant’s connection to local communities also makes it stand out from the rest.

The chain often gives back to the community, including donating 10 percent of proceeds to the Castle High School marching band, hosting a lunch to benefit the fight against polio, or providing meals to local nurses.

“Bubba’s 33 culture is unmatched in the industry,” Nolcox says.