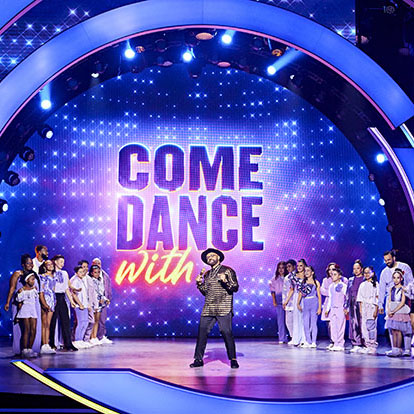 When Evansville Living last spoke with Philip Lawrence, a River City native and eight-time Grammy Award winner, he was in Melbourne, Australia, filming a new television show for CBS. Called “Come Dance with Me,” the competitive dance show pairs each young performer with a family member who, although untrained in dance themselves, have supported the competitor’s dance dreams. Together, they will perform each week in an elimination-style competition, all the while giving audiences a look at the bonds they share.

“Come Dance with Me” premieres this Friday, April 15, at 7 p.m. on CBS, with Lawrence serving as host. The show is executive produced by “NCIS: Los Angeles” stars Chris O’Donnell and LL Cool J.

“I can’t wait for you guys to see this show,” Lawrence says. “It’s been an incredible experience.”

His work on “Come Dance with Me” symbolizes a full-circle moment in Lawrence’s career. After two semesters attending Tennessee State University in Nashville, Tennessee, and a brief stint acting at a North Carolina museum, Lawrence in the 1990s moved to Orlando, Florida, with his brother Shane and fellow Evansville native Carlos Ware and formed a singing group, Vision, to perform at Universal Studios. The gig eventually landed Lawrence an interview for an emcee job with executives at Disney.

“We went to Florida and stayed there two weeks on vacation. At the end of it, we decided Philip was going to audition for Disney,” says Lawrence’s father, Phil. “We went to Chicago with Philip, Shane, and their partner, Carlos, and we all went to the Comedy Club. Philip walked in to audition, and he performed a piece from ‘Big River.’ The people from Disney jumped up and said, ‘Stop! Get his picture, get his number, you’re hired!’

“Philip that day became the youngest emcee at Disney at 21 years old. He was an ambassador for Disney; he went all over the world,” Phil says.

“It really allowed him to understand the depth of his talent,” says Lawrence’s mother, Cheryl. “From that, he was able to do exactly what he’s doing now at CBS. So, God brought him full circle.”

Lawrence agrees, saying “Come Dance with Me” is a chance for him to engage with an audience in a new way. Lawrence himself is close to his family — he, wife Urbana, and their children live in Los Angeles near his parents, sister DeVonna, and brother Shane and his family — and says the show appealed to him by emphasizing the bonds of support between loved ones.

“I’m in a hosting position that I kind of always dreamed of being (in), where I’m able to be myself. I’m able to have fun and have some joy and share that with audiences,” Lawrence says. “We’re laughing, we’re crying on stage. It’s just spectacular.”