In its more than 200-year history, Evansville has seen various businesses come, go, revamp, start over, and thrive. The R&G Furniture Store formerly located in Downtown is one such story.

The building at 116-118 Main St. wasn’t always a furniture shop. It was built in 1896 by Ichenhauser & Sons and served as a glassware store. But only five years later in 1901, they decided to sell to Ferd A. Gumberts, who turned the building into a furniture store, renaming it Rosenthal and Gumberts Furniture Co. after his brother-in-law Ignace Rosenthal and himself.

“It was next door to Red Spot Paint’s Main Street location,” says Evansville history buff Larry Lee. “I remember seeing furniture in the display windows from our many trips Downtown on Friday nights.” 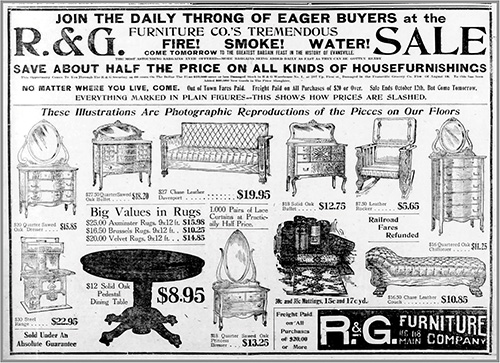 Ferd, along with his brothers Richard and William and all of their uncles, worked to make R&G Furniture a popular furniture shop. Old advertisements tout furniture that would “last a lifetime” as well as selections with “the most wonderful range ever offered.” R&G Furniture Co. also was famous for its electrical rocking chair sign, which was one of the first moving electrical signs in Evansville.

“I liked illuminated signs back then,” says Lee. “I recall many of them around Downtown, although the rocking chairs on R&G stand out in my memories from those years.”

Richard A. Gumberts, Abram’s oldest son, was named president of R&G Furniture Co. in 1960. He and his wife Susie, who gave back to the community through the Evansville Philharmonic Guild, Keep Evansville Beautiful, and the former Vanderburgh County Home for Unwed Mothers, generously donated scholarship funds to the University of Southern Indiana Romain College of Business.

According to Historic Evansville, urban renewal eventually forced R&G Furniture Co. to sell, putting the company out of business in 1967. The redevelopment commission bought the building in 1968, and it was later razed. The Gumberts, however, remain important figures in Evansville’s history. 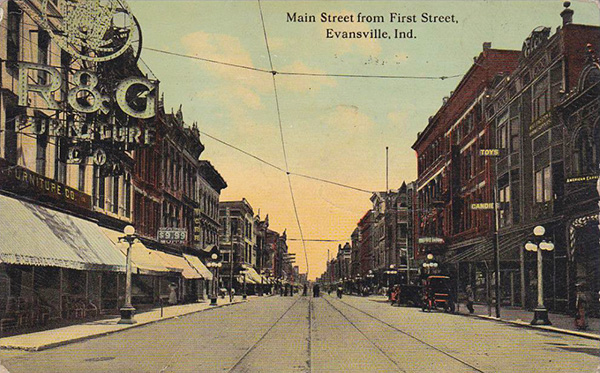