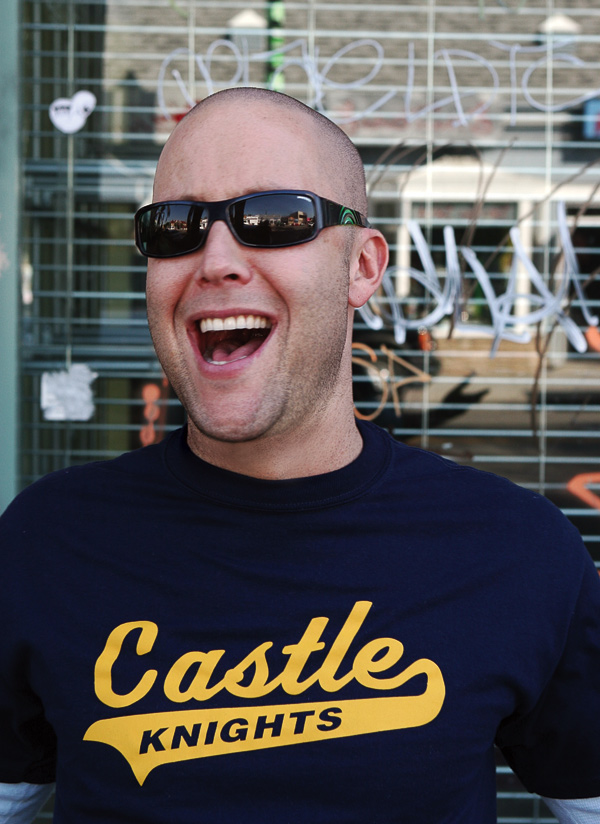 Landing at Los Angeles International Airport on the afternoon of Oct. 20, 2006, I checked my Blackberry for messages:

r u ready for tomorrow. dont want to wear u guys out.
I texted back: landing now. call me in the a.m.

We’d arrived in Los Angeles to interview actor Michael Rosenbaum, best known as Lex Luthor on the long-running Superman drama, “Smallville.”  The Rosenbaums lived down the street from me growing up in Newburgh.

The welcoming – and foretelling – text message was a continuation of a lively banter that began six weeks earlier when an e-mail from an unfamiliar address arrived:

My mother’s been going on and on about Evansville Living. I’d love to talk to you about it. Hope all is well.

Of course, we’d like to do a story!  Anyone can do a phone interview, I told Michael.  “If Evansville Living does a story on Michael Rosenbaum, we’ll come out to L.A. to see how you live, who you hang out with, and just what it means to be a kid from Newburgh who’s made it big – really big – in Hollywood.”

Beginning Saturday morning at 9 a.m., when Michael picked us up at a hotel off Sunset Boulevard – screaming down the street in his new silver BMW M5 convertible and wearing a Castle Knights T-shirt – Jesse and I spent 20 fast, furious, and fun hours with Lex Luthor. Our adventures began with a stop at the Canyon Market, an upscale deli at the base of the mountain where Michael lives (for pastrami sandwiches and toilet paper) and ended at the 50th birthday party of “Star Wars” actress Carrie Fisher, at her Coldwater Canyon home (formerly the actress Bette Davis’s home) where Michael presented the birthday cake with famed director George Lucas.

In between, we shopped all day, Michael’s favorite pastime. Clearly, Michael’s threat to wear us out was not idle. But before the shopping extravaganza began, we unloaded our camera and overnight bags, and dined on our pastrami sandwiches, at Michael’s home of three years, located near the top of Holly-wood’s Lookout Mountain.

“The neighborhood is like a Greenwich Village on the hill,” says Michael’s mother and Evansville resident, Julie Engel-hardt. “I get the feeling there are a lot of musicians and artists living on the street.”

The three-story Arts and Crafts style home is perfectly suited to the 34-year-old bachelor.  His collections – music, books, guitars, movie art, action figures, and toys – fill every shelf.  The closet in his master bedroom houses at least 100 pairs of cool, urban-style shoes; his hundreds of T-shirts (Michael’s main uniform), including several Castle Knights and Sharon Crusaders T-shirts, are neatly hung and folded.

The lower-level game room features a vintage Galaga video game, Michael’s first big purchase in New York City when he started to make a bit of money, and a “wicked” karaoke machine. Viewers of MTV likely have seen Michael’s home on the show “Cribs,” which takes a look into celebrity homes. In it, he and buddy Christopher McDonald, a producer on PBS’s Tavis Smiley Show, practice karaoke singing to Wham’s pop hit of 1984, “Wake Me Up Before You Go-Go.”

Parked out front, alongside his sweet BMW, is Michael’s custom van. “I wanted a van so bad as a kid,” Michael says. “The Currys, down the street (in Newburgh, growing up), had one and I was so jealous because my parents had sports cars. So now I have my van, totally customized, perfect for that road trip to San Fran.”[pagebreak]

But it wasn’t the van we took out shopping in Hollywood.

We hopped in the convertible and headed out to the Third Street Farmer’s Market, west L.A.’s oldest open-air market, and The Grove, a stylish pedestrian shopping area next door to the market. The energy, intensity, and humor Michael emanates requires plenty of calories, so our day was punctuated with several stops for snacks and Jamba Juice – with immunity boosters.

Michael’s father, Mark Rosenbaum, who now lives in Manhattan, says, “Michael’s a bit of a hypochondriac, but he never was sick growing up, ever. We used to think he was super human, honestly.”

To say that Michael is “on” constantly doesn’t begin to describe his demeanor. He is the most high energy person I have ever met. His parents and friends agree, saying Michael’s energy and drive is matched only by that of his younger brother, Eric, a technical manager for a pharmaceutical company in Long Beach, Calif., who possesses the same gift.

From the moment our feet hit the Hollywood pavement, Michael was in high gear. His friend, Christopher McDonald, joined us and together their wit was a formidable force. Babies, dogs, street vendors, retail clerks, glamorous women and fans all provide Michael and Chris with plenty of friendly amusement to fuel their non-stop banter. They were both totally in their element at the mall; in fact, they have a long-running joke that the “code word” – for anything – is “the mall.”

When we’d done all the damage we could do at The Grove, we headed to Melrose Avenue in search of cool vintage T-shirts and to browse Fred Segal. After 40 years on West Melrose, this collection of ultra-hip boutiques is a common destination for celebrities. Like all things truly cool in L.A., Fred Segal doesn’t look like what it is – more an ivy-covered bungalow than the home of L.A.’s hippest gear of the moment. It also houses a café, where we ate a late lunch and where our cute waitress held considerable interest for Michael. Outside we ran into Rebecca Gayheart, Michael’s co-star in “Urban Legend,” who recently had a role in the cancelled FOX series, “Vanished.”

With the Southern California setting, our shopping expedition ended and we drove back to Michael’s home, where we planned to shoot our cover photograph and rest up for Carrie Fisher’s birthday party.

To Michael’s friends and family, his friendships with celebrities are not surprising. They’re accustomed to late night phone calls from Michael with the announcement, “Mom, here’s Dustin Hoffman.  Say hi.”

Michael’s high school friend, Kent Brenneman, who lives in Evansville and is owner of the real estate firm House Hunter LLC, explains his charisma.  “We go out to visit him, and he’s the same in Hollywood as he is in Newburgh.  It’s that charisma and wit.  Big time stars flock to him, just like people do here; it’s just a different crowd.  He’s a caring guy who’s the center of attention wherever he goes.”

From the moment we walked up the enchanting drive to Carrie Fisher’s famed Hollywood compound, Jesse and I knew we were in for a special evening.  It was an intimate party for about 90 of her closest friends. We were amazed to be sipping champagne amid celebrities like Ms. Fisher and her lovely mother, Debbie Reynolds, and others, including Sharon Stone, Matthew Perry, Robert Downey Jr., Courtney Love, Beverly DiAngelo, Greg Kinnear, and Megan Mullally.

The most amazing aspect of the evening, though, was Michael. It was Michael, the kid from Newburgh, who absconded the Princess Leia-styled cap, hand-knitted by guest Tracy Ullman for Ms. Fisher’s birthday present, and wore it through the buffet line. It was Michael who encouraged me to meet the famous architect Frank Gehry. And, when it was time to honor the birthday hostess, against a backdrop of slick Hollywood videos projected on a giant screen nestled in the trees, it was Michael Rosenbaum and George Lucas who sang the loudest and presented Ms. Fisher with the cake.