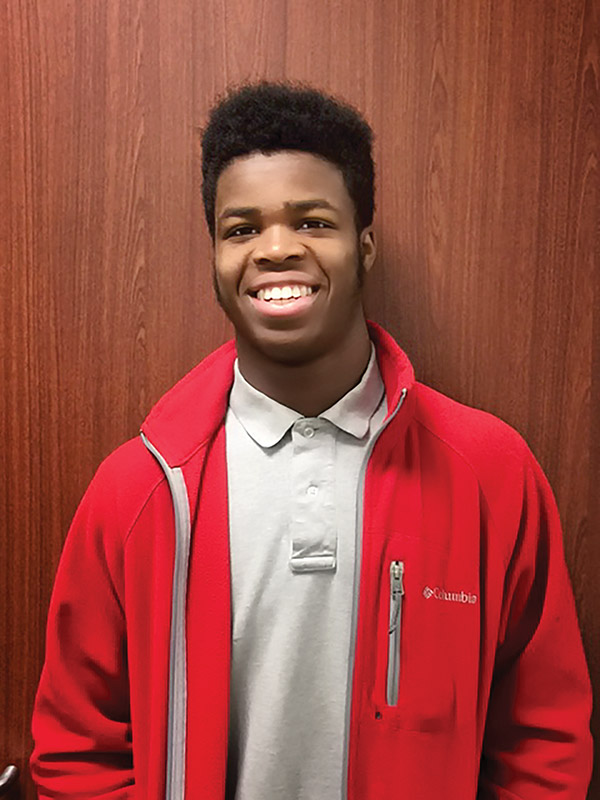 Evansville has a long history of producing student athletes who have excelled at the highest level of their sport — baseball’s Don Mattingly (see story), multi-sport athlete Bob Griese, basketball player Calbert Cheaney, and Olympic swimmer Lilly King are just a few. After talking to area coaches, athletic directors, and individuals with firsthand knowledge to determine some “can’t-miss” high school athletes, seven names emerged as the top of the top. Meet these young athletes and discover what they are doing to excel.

Central High School running back Tor’Jon Evans made history this fall when he became the first freshman to be named All-City Player of the Year by the Evansville Downtown Quarterback Club. Instead of getting comfortable with the award and success, Evans says he will work harder, get stronger, and be better by fall 2017.

“No ifs, ands, or buts about it — if you want to be successful in life, that’s what everybody should do, work hard. Football is the sport I love, and I will work hard for that,” says Evans, class of 2020. “I just can’t wait until next year.”

With improved speed, strength, and vision, Evans should be fun to watch over the next three years.

Alex Montgomery, class of 2018 at Castle High School in Newburgh, Indiana, wakes daily at 5 a.m. to put in extra time at the pool. As a swimmer who has won multiple state division age group titles and is a consistent Junior Nationals qualifier, Montgomery’s efforts likely will earn him a scholarship to swim for a major conference Division I school.

“I keep a pretty tight schedule. I’m usually up late doing homework,” says Montgomery, who holds Castle’s 500 freestyle record and was a member of the record-setting 400 freestyle relay in 2016. “I get up early, swim or lift, go to school, swim again after school, go home and do my homework, sleep, and repeat, pretty much.”

Jack Nunge, Castle’s class of 2017, also sacrifices sleep to work on his game. In addition to daily basketball practices, the 6-foot, 11-inch power forward rises early to get in 300 to 500 shots before school in his home gym. The extra effort has earned him a future spot on the University of Iowa basketball team, but he currently is dedicated to having a winning season with his teammates.

“My focus is just to go out there and do anything my team needs to win,” says Nunge, who accrued his 1,000th career point Dec. 30, 2016. “I don’t like to look at the individual statistics. I could care less about them; I just want to go out and get the W.”

Nunge’s ability to mix it up under the basket along with the skill to hit the long-range jump shot help make him a consummate team player.

Mater Dei High School’s Joe Lee is proof that hard work pays off. In 2016, the Wildcat wrestler won a state title in the 152-pound weight class. For Lee, sacrificing is more than just eating healthy to maintain his weight.

“Sometimes that means you can’t go to parties on the weekend, you can’t go to movies, you can’t hang out with friends when you have big tournaments coming up. The biggest thing you have to keep in your head is self-discipline,” he says, adding Evansville’s competitive culture has made him a better wrestler. “It’s almost expected to have good athletics from every school; you have to live up to the expectations sometimes.

“You just have to know when you’re in practice, everyone else in the city is working just as hard as me, so I’ve got to work even harder,” says Lee, who will leave his younger brother and fellow Mater Dei Wildcat Matthew Lee in the fall of 2017 to wrestle with older brother Nick Lee at Penn State University, State College, Pennsylvania.

Hadley Walts, class of 2018, verbally committed to the University of Tennessee when she was a sophomore. She has led the North High School’s girls’ golf team to three undefeated seasons and three state championships while recording a season average score of 73 her junior year. She often spends her summers on the golf course when she could be spending time with friends.

“I’m not focusing so much on what’s going on right now,” says Walts. “I’m focusing on my future. Just knowing that putting in the effort and hard work and golf is going to get me far.”

Walts will be a player to watch during her senior season in 2017.

Only a freshman, Elizabeth Broshears already has set city records in the 50-yard freestyle and 100-yard backstroke as well as the Southern Indiana Athletic Conference record in the 50-yard freestyle. She attends after-school Memorial High School swim practices and often those for Boonville Aquatic Dolphins competitive swim club directly after. She says balancing schoolwork and athletics requires focus and effort.

“I will not lie — there are late nights. It definitely requires time management,” says Broshears, who has multiple age group state titles and also competes in Junior Nationals events. “You have to be willing to put in the extra work that some others might not be able to put in so you can have that small bit of difference, even if it is a hundredth of a second that wins the race. Everything you do to win that race accumulates and makes you better.”

Andrew Cross, Memorial class of 2018, led the school’s soccer team to a state title in 2016. Although it was a win for the Tigers, the forward says he was proud to bring home a championship for the city.

“When we went to state, I knew the whole city would be cheering for us. It wasn’t just the school, but also doing it for the city,” says Cross, whose skillsets put him in position to be one of the best in Evansville’s long line of soccer greats, as well as to be hotly recruited by major Division I soccer schools. “Knowing the city is there cheering you on also is a great feeling.”